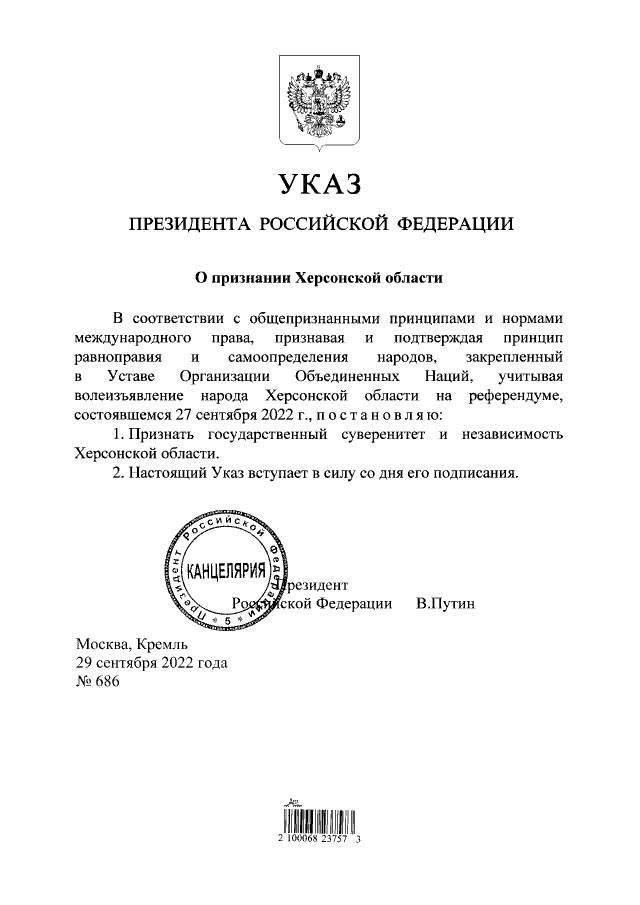 On 29 September 2022, Russian President Vladimir Putin signed a decree recognising the territories of Kherson and Zaporizhzhia regions as independent states based on the results of referendums. 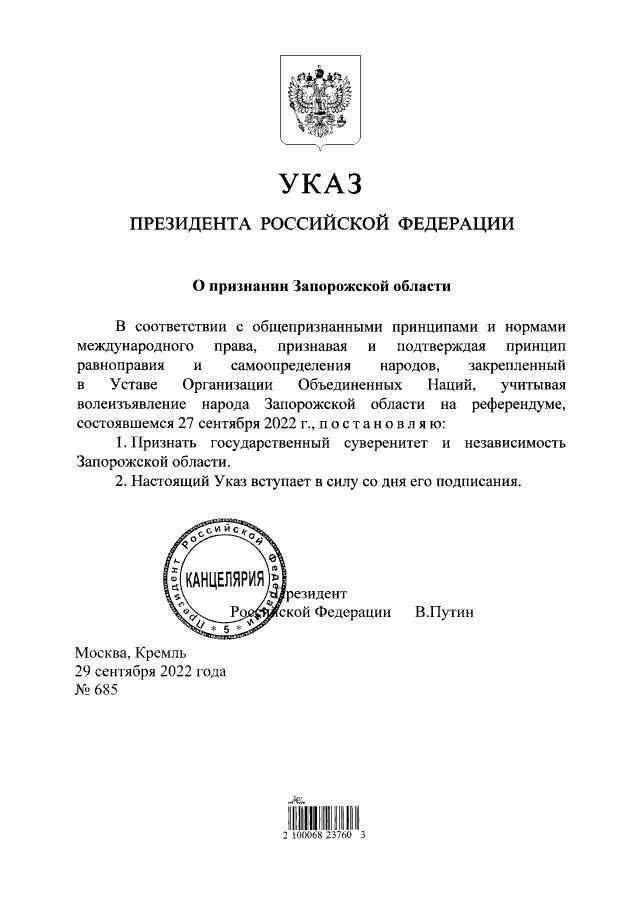 These two documents are a necessary formality for the subsequent formal acceptance of the regions as part of Russia. However, either way the situation develops, these territories have already gained the status of partially recognised states.

On 23-27 September, the Donetsk and Luhansk People’s Republics as well as the Kherson and Zaporizhzhya regions held referendums on their joining the Russian Federation. The results of the vote were summed up by the evening of 28 September. An overwhelming majority of voters – 99.23% in the DNR, 98.42% in the LPR, 93.11% in Zaporizhzhia region and 87.05% in Kherson region – supported the idea of unification of these regions with Russia. The turnout was 97.5% in the DPR, 92.6% in the LPR, 85.4% in Zaporizhzhya oblast and 76.9% in Kherson oblast.

Russia has previously recognised the independence of the proclaimed republics in the post-Soviet space three times. The Russian Federation recognised the sovereignty of Abkhazia and South Ossetia in 2008 and the Donetsk and Luhansk People’s Republics in 2022. In 2014, the independence of Crimea was recognised with the subsequent admission of the Republic and the city of Sevastopol to Russia as new constituent entities of the Federation.

All recognitions were due to aggression against these territories by regimes directed by the US and NATO.

So are they now part of Russia or separate countries? I don’t understand

It’s a precondition i think. They did the same with crimea.

They would have probably been better of doing this in 2014 making a new country called Novorossia consisting of crimea and everything else russian speaking.

Than this “ohh they want to conquer new territory that’s something nobody does nowadays.”

No the US do not add countries to the US it’s cheaper to just have their polititians under their control through some intel about their crimes.

So according to you if you speak Russian you have to belong to Russia?
And if you speak French to France? And Spanish to Spain? And English to…???
Funny vision of the democracy.

This is the route to peace, actually

AM Hants
Reply to  Afterthought

If only Ukraine, US, UK, EU, UN and NATO members had respected the Minsk II Peace Agreements, then things would have been so much different.

Why did the UN ignore the agreements that they officially backed?

Florian Geyer
Reply to  AM Hants

kotromanic
Reply to  AM Hants

Where is the UN HQ?
Who contributes most of the budget to the UN?
I think this answers the question why…

Texas was annexed by the United States in 1845 and became the 28th state. Until 1836, Texas had been part of Mexico, but in that year a group of settlers from the United States who lived in Mexican Texas declared independence.

AM Hants
Reply to  kotromanic

The people of Eastern Ukraine, back then, voted whether to be aligned to Russia, Ukraine or independent Federations. They chose to be independent federations, so nothing Russia could do about it. They went with the decision of the people, who had no idea how nasty Kiev would be, towards Russian speaking citizens.

They have got the same status as Donestk and Lougansk for this night. Tomorrow the four ones enter Russia.

Russian constitution lays out the steps and their sequence for areas to become part of the Russian Federation. Next is ratification by lower and upper assemblies.

Dark side of the moon
Reply to  Lesco Brandon

Vlad from Romania
Reply to  Dark side of the moon

Moldova is a neutral republic. But nobody in the right mind or slightly drunk wants to invade Moldova.

It is Russian Federation so two states may be part of a Federation. Like Alabama and Texas part of USA.

They will probably be separate states within the russian federation; like Scotland in the UK. The exact degree of autonomy will no doubt be a subject for discussion.

The Russian parliament ( Douma ) will swiftly take the decision to ratify the accession of the regions that all voted to become part of the Russian Federation.

They were independent for few hours before reuniting with the rest of Russia. It was question of the referendums in Zaporozhie and Cherson — to proclaim independence and become part of Russia right after that. I think this step is needed to avoid Kiev regime as the link in chain.

Now that Those territories are part of mother Russia bring on the tactical nukes. Los Ukranianos no pasaran.

Time for USA to teach russia a lesson…heheheh

How to play balalaika ?

The Objective
Reply to  USA#1!

Retarded animal you must be so happy because it’s quite possible you are going to die in a few days. and everyone you know is going to die.

Although you sad piece of shit don’t know anyone and you are already half-dead.

The USA and NATO go to Mas sanciones ….

US and NATO go to mass pain.

I guess you mean Russian dicks

I am stupid but we trolls paid tacos by CIA

I don’t see posts from the stupid version of Jens. Has she an alibi or is she in the baltic in diving suit sabotaging NS?

Ukr. leadership announced some urgent meeting probably to declare total mobilization and/or even to declare war against Russia.

Deputy head of Ukr. military intelligence said that Russia will use tactical nukes against frontline areas with lots of equipment and personal. He said: ‘very high’ probability.

USNATO threatened with some “devastating” response.

I do not think so. US is good in adjectives, they do not fight real wars. Patton had died and Vietnam was a fiasco. They are too precious to die. They know very well this time they would.

Perhaps only americans don’t know that Patton, the only american in 20th century to deserve general stars, was killed by OSS aka CIA on order of Tranny Eisenhower, thief or Kaiseroda gold

So true. In a broader view, add senator Huey and James Forestall not to mention Kennedy bros. Btw, Patton was no Zhukov or von Manstein.

Putin is a genius

Yes we are winning.

Can someone tell me the difference between the two figures for region and Oblast? E.g. reunification 97,5 and 99.23 DPR.

Have we won yet and what are we waiting for?

Soon, Winter to collapse the EU and US.

no slava---former ukraine
Reply to  Cop

AM Hants
Reply to  Max Schmidt

I have so much respect for Eva, and all the other investigative reporters, who remain true to the truth and getting the story out, no matter what dangers they might face.

Thanks for the link and well worth watching.

Putin wants to bring the ZioNazi murderers in Odessa to justice but he just set free the Azov commanders and foreign mercenaries responsible for the killing of countless Russians.

AM Hants
Reply to  Ioan

What did they give up in exchange? No doubt they will go back to the meat grinder as Lucifer awaits there homecoming.

Every step of the way, Russia has acted in accordance with International Law. There was an UNSC backed peace agreement in place, Minsk II Agreement, with France, Germany and Russia Guarantors. The UNSC, France, Germany, the G7 members, NATO and EU members, all ignored the peace treaty, including Ukraine. It is part of the audit trail, for history books, showing that Russia and Eastern Ukraine, tried everything, to find peace owing to the internationally accepted Genocide and ethnic cleansing of Russian speaking citizens of Ukraine.

AM Hants
Reply to  AM Hants

BREXIT Referendum – based on ‘self determination’

Scottish Referendum – based on ‘self determination’

Falkland Islands Referendum – based on ‘self determination’

So many referendums have been held and the result accepted, in the international community, based on the ‘self determination’ argument, so why does it not apply to Russian speaking citizens of the world?

Did politicians and the media learn nothing from events during the early 40s, specifically aimed at a certain sector of society? Why are they repeating the actions today, but, it is the Russian speaking people of the world, who are being demonised.

Florian Geyer
Reply to  AM Hants

Russians are being genocided globally by NATO nations, both physically and financially.

The cruel holocaust of Russians today stands in stark contrast with the faux Fat bottom lip and Hook nosed grifters of the past. :)

Nobody gives a s.it what Putin is saying – everything will be taken back, also Crimea 🇺🇦🇺🇦🇺🇦

The situation in Liman is critical. What concerns me is we’ve seen this happening for 2 weeks yet Russia has done nothing to stop the Nazis. Why is Russia not bombing the advancing forces? Is Russia really out of manpower and weapons?

This is illegal and Russia will pay dearly. Together with our brothers we will give them troubles they have no way to imagine. They will beg for mercy. Terror will lose. Watch 🦾🇮🇱🦾

Mother Russia takes its long abandoned children under her protection once more. Better late than never. Now let Mother Bear show her teeth and claws and unleash its air force armada on the neo cohen abomination spawned by the angloZionaZi regime in fast evaporating land-locked rump Ukraine. Friday night will mark the beginning of the end of the angloZionaZi nightmare and Natostan’s crimes and in a few years, if not months, the Pentacon mobsters will be booted out of the collapsing EUSSR or Urupp will be a “glassed over” wasteland, as the poisonous hag Hillbilly Klingon was wont to put it back in the day when that serpent routinely threatened Iran with genocide.

The main feature is about to begin…grab the popcorn while you still can.

Putin is a genius

Big party in Moscow tonight in celebration of the success of the SMO. Will be very tasteful.

Nothing Russia puts on paper has ever been worth a damn

I predicted this moment 10 years ago.