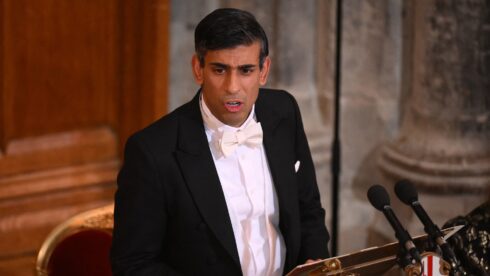 Rishi Sunak believes it was “naïve” to think closer economic ties would lead to reforms in China.

On November 28, British Prime Minister Rishi Sunak delivered his first long speech on foreign policy. Sunak said that the “Golden Era” with China was over. He also described the belief that closer economic ties would lead to the Chinese Communist Party (CCP) making internal political reforms as “naïve” and stressed that the UK had to replace wishful thinking with “robust pragmatism” towards competitors. However, Sunak warned against “Cold War rhetoric” as China’s global significance could not be ignored.

The British leader said “we cannot simply ignore China’s significance in world affairs – to global economic stability or issues like climate change.” He added that the UK would work with allies, including the US, Canada, Australia, and Japan, to “manage this sharpening competition, including with diplomacy and engagement.”

“It means standing up to our competitors, not with grand rhetoric but with robust pragmatism,” Sunak said.

The statements made by Sunak about China is not only for domestic consumption, but also to foreign observers. The general impression is that Sunak is first trying to please internal political circles, particularly his own hawkish party. The prime minister understands how vulnerable and unstable his position in the party and government is, especially as a series of challenges to his power continue unabated. For this reason, he needs to make tough statements and present himself as an assertive politician.

When Sunak was Finance Minister, he announced that he wanted trade relations with China and thought that trade could lead to a change in the CPC’s values ​​system. This was not successful and it is recalled that his predecessor Liz Truss was even reportedly planning to categorise China as a “threat” to the UK. By displaying his assertiveness, Sunak has protected himself from any criticisms made by the anti-China groups within his Conservative Party.

This time, Sunak did not call China a threat to British national security, which may disappoint the hawks in the ruling Conservative Party, but he appeased their expectations by making statements that even his predecessors were hesitant to make. As an example, it is recalled that Boris Johnson hesitated to announce the end of a “Golden Era” with China.

The British Prime Minister’s pledge to act with “robust pragmatism” in competing with China was most likely an attempt to mediate for and against cooperation with China. The truth is that Sunak, like many within his party, is more of a businessman than a statesman. He clearly understands that solid pragmatism is supported by Britain’s economic and technological sectors.

At the same time, Sunak probably understands the importance of Chinese capital to the British economy as certain sectors would not exist without it. It could be suggested then that he wants to maintain a delicate balance between those who favour and oppose cooperation with China. If this is the case, as long as bombastic remarks do not lead to actual actions, then it is unlikely that Beijing will be too concerned by rhetoric alone.

In 2023, the UK government will present a new comprehensive Foreign, Defence and Security Policy Review. In this regard, the Prime Minister promised that the new document will have more details, including the UK’s interaction with partners from countries of the British Commonwealth, the US, the Persian Gulf, and Israel.

The UK adopted a policy in March which noted that China and the UK benefit from bilateral investment and trade. It also noted though that China is the biggest threat to Britain’s economic security. The Review recognises China’s role in the global economy and says the UK is determined to pursue stronger trade ties with China and gain more investment.

It remains to be seen how the global role of China that Sunak mentioned in his speech will be reflected in the new policies to be adopted by London. It is likely though that Britain will continue to view China as a security threat, while at the same time limiting actions to not overly provoke China which could lead to issues in economic relations.

True. But it’s the other way around. Bc Sunak stands for the globalist resetters, he tells everybody: we won’t let you do business with China. Of course, in a sane world, they would.

You are in old days. China today is a high affiliated in the western economcs. Your version is represented by old days in Russia only.

Its very much a trade war between USA, EU and China. All 3 has problems and need reforms. Nothing can be solved by protection as well as selling first and second class preoducts to unfair prices.

Even Sunak is not EU he speak as EU do. If China is no open market economy its Our right to make limitations as well.

In the other hand its no way to protect ineffective productions. If USA users of aluminium get the best and cheepest from EU by their choise USA itself should implement modern methods to compete instead of prortecting the old very expensive energy waster.

EU as well as USA cant expand in China in normal market ways. They/we are stopped by their state ownership. We also cant handle their many copycat productions, where we get so many cheeper påroducts in, but the stanrdards also are lowered to make them cheep.

I love men and curry, but both give me the runs as my ass is very weak now.

You do Mr Tanovic. I have no doubts.

US, EU and China are all corporatocratist regimes. Look at what they are doing with COVID.

It happen because only one word jealous.

What a pathetic India curry munching uncle Tom. Even us Danish fruitcakes don’t kiss as much ass.

Its a part of DNA, So we use it well.

Ofc the Indian pig gonna end it. I’m joking they were heading that way for sometime.

If you want foreign investment you got to kiss ass; otherwise, go it alone. One cannot slander someone and then expect anything good in return.

Thats what the trade wars are about. Well its a part of it.

London Jewish Sassoon had UK PM Cameron declared UK would has Indian Hindu PM soon to newly installed India PM Modi in 2015, before he abruptly quit o let clowns like May, Boris and Liz took over. His party then inducted a nobody Sunak, son-in-law of India Infosys owner.

Soon Sunak was fast tracked appointed directly as Chancellor without political or office holder experience by 2020 as youngest ever in history, but got removed quickly for his disastrous COVID policy.

Then reinstalled as unelected PM as less stupid choice than Liz by 2022, after bargaining with Boris in closed door deal to withdraw and gave all his hundred of votes to back Sunak.

Indian coolie Sunak has to show his Muppet worth to his god chosen masters that installed him.

You mean of course the “Golden Era” of exploiting China is over…..

I woukld say its like that. They came from a kind of new land by Chaiman Mao.

Now they are established doing better but ls dont have forget keeep as well.

China now has so man goos structures just as many of their moden tradepartners. They have to learn to behave in this.

Keep is not forget, that as long as many things are new, they dont need paint. Its an extra to keep. When You raisew the living stnfards, Ypu also gets more demands by expåectations.

One of them is salery. Europe has lost man jobs to China but also has made a lot of new jobs. Its the sa,e for China.

but every man and his dog wants to go to the UK, as if their lives depended on it. Nobody wants to live in Al-Baqistan or Al-Hendustan.

Its so typical for so many here. hey cant raise their own levels and living standards.

So their wishes are we should decline or collapase doen to their level.

They systematicly ignore their own home made infections. None ever debate about better education. Non debate about motivation. Its forbdden.

Real debate is forbidden. Human right has been deleted fx by Putin & Duma.

No way. Both are equal parts of the western economy. In that things goes up and down by companies and countrues.

You as too often dont see we are advanced and integrated. We own each other by the stockmarkets.

Obviously, the chiniese are not dumb enough to even consider going down our route after seeing our citizens suffer, as the oligarchy literaly drinks their blood, while colonising their countries with third world savages to further divide and conquer the defeated populations of the western world.
For all they’re laughing at the sheer insanity of it all, noone would wish this even on their worst enemies. Much less on their own people.

Except, of course, (((gods chosen people))) who run the whole scheeme as a ethnic vengence against God and the historicly Christian white peoples of europe.

UK and West Europe is Christian, eh? Hillarious 😆 You are confusing faggotry and backstabbing cult with Christianity, buddy.

You are right. Most of us are much more sekular then christians. Debating rthe many muslim incommers has made me less christian.

Religion to mee is needed for many but not for me. Its a private matter. I do learn and take good parts of the christian ways of lving, but its very much old days.

It goes for including all and equal rights for gender as well as the DNA made LGBTs. We all are the same and came out naked in the same way. Before that we were made in the same way.

So no matter what I now prefare some lawyers contract for propersty, money and children.

But I would say Christianity is many things too. Many are not hard head insisting ones and show respect for the rest of us.

In my opinion Ahmed Adel sums up one flaw in global leadership in this statement ” The truth is that Sunak, like many within his party, is more of a businessman than a statesman.” as this applies to the ruling cabal in D.C. also and could easily be their downfall.They helped create today’s China because they worship money and ignored the future consequences for themselves.

This dead beat East India Trading Co. is highly successful in the banana republic of Al-Baqistan. Don’t be mislead.

You have to be more in detail and look for world companies even they are by the stockmarket. You can look up and start fx with UNILVER; BP and SHELL.

Thats right. They have been like that for centuries.

But You forget those people has not trated their own populations well as well. Its easy to see by Adam Smidt and the many starving and dead people fore Ireland.

Its the same for my Denmark. Even we was a slave trader nationirs wasnt about my family. We were between the many many poor living here, where many emmigrated to anything else as well.

By that I feel no reason to excuse what other parts of my country did more then 100 years ago. I wasnt even born.

China never considered they has golden era with UK , UK is only business partner.