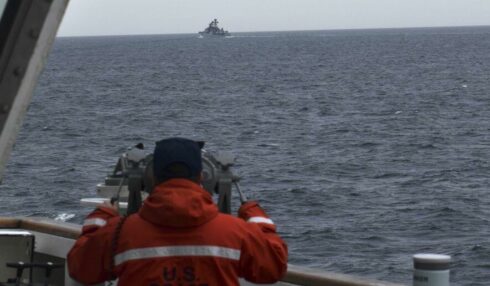 The US military revealed Monday that earlier this month a US Coast Guard had ship embarked on a routine patrol in the Bering Sea and its crew was surprised to come across a Chinese PLA Navy guided missile cruiser.

But more rare and unexpected was that the Coast Guard soon discovered the Chinese ship wasn’t alone as it sailed off Alaska’s coast, but was accompanied by two additional Chinese military ships and four Russian naval vessels, including a destroyer. The Chinese-Russian patrol group was described as being “in single formation”.

According to more details by the Coast Guard and reported in the Associated Press:

The Honolulu-based Kimball, a 418-foot vessel, observed as the ships broke formation and dispersed. A C-130 Hercules provided air support for the Kimball from the Coast Guard station in Kodiak.

“While the formation has operated in accordance with international rules and norms, we will meet presence with presence to ensure there are no disruptions to U.S. interests in the maritime environment around Alaska,” said 17th Coast Guard District commander Rear Adm. Nathan Moore.

The reference to the “presence with presence” patrol strategy is a method of dissuading such enemy foreign vessels from coming near US waters by maintaining frequent naval and coast guard patrol activity. 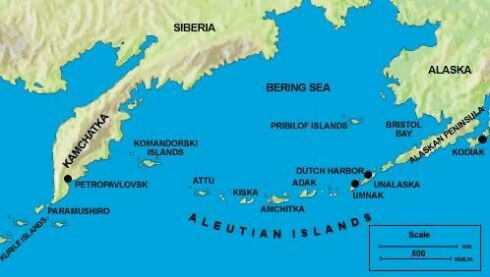 This latest incident follows something similar a year ago, when in September 2021 Chinese ships were spotted by Coast Guard observers 50 miles off the Aleutian Islands. The Chinese and Russian navies have also been ramping up coordinated activity in the Sea of Japan and near Japanese islands, which Tokyo has protested as an unwarranted intrusion.

You sound like you have a cock in your mouth. Oh wait you do 😆😆😆

Well said. They still think that they can dicatate their will to the world. Luckily the tide is turning.

AM Hants
Reply to  Donnchadh

Especially when Alaska used to be part of Russia and you can walk from Alaska to Russia, on a good day. No doubt, they are whinging, because they actually saw Russian ships in Russian waters, accompanied by their mates.

Installing missile shafts in Poland and Romania is nothing. Creating nazist regime in Kiev — struggle for democracy. Sending mercenaries to murder people is defending of democracy. Passing in international waters in the middle of Bering sea and over 1500 km off large cities (Anchorage and Petropavlovsk) is awful incident.

Chinese are using Russia whenever they need help but they never help Russia.

Even if the Russian and Chinese ships start to fire at the US the Chinese ships will not fire. They will sail away and claim technical problem to Russians. In mean time, struck Russian ships will radio “Mayday” people are dying in cold water. The Chinese ship will not sail back and help, maybe until 2-3 hours when almost everyone is dead. Maybe they manage to get not more than 5 Russians of 300. What a slap in the face.

China is a no good country, its no point to sail with them or have any military cooperation.
China have also never support Russia, Iran or any other country diplomaticly. When there is voting China always vote against this countries.

Let not forget everyting bad that ever happened in middle east, Africa, was on Chinas current goverment watch and support.

Who is next? First Kurile Islands, Ukraine and now Aleutian Islands, and next Alaska.
Putin knows no limits in his lust for gobbling more gold and more landmasses.

California? Russians had a fort there once…. and Hawaii .

No time for satanic gimp
Reply to  Tommy Jensen

Alaskas gone dumbed down and sarcastic lgbt woke too,must be retaken too,send the cheque to us fed.