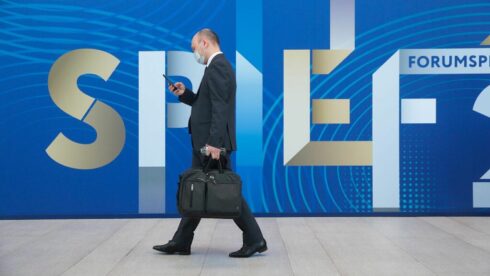 SPIEF will be organized in an era of great change

Despite the increasing influence of the military agenda on the information background in the world, business still plays the main role. It is the monetary component that determines the agenda, contrary to emotions and political gestures.

It should be noted that a situation similar to the one in which Russia is currently trapped has been occurring periodically lately. Economic sanctions have become the most common way of fighting against political regimes undesirable to the “civilized” West. Such countries as Iraq, Syria, Iran, Belarus and Venezuela have already been hit in this way. Sanctions have been imposed against all of these countries in defining economic sectors. Some of the most recent examples are Belarus and Venezuela. Sanctions were imposed against the former with an embargo on agricultural products, the latter with an embargo on hydrocarbons.

Despite the relative crisis state of the economies, which were indeed affected by the sanctions, the exported goods have not disappeared from the world market. Belarusian fertilizers have recently been imported by some countries (the Baltic States and Poland) in an amount almost twice as much as the pre-pandemic level. Venezuelan oil was also actively exported to foreign markets. What these situations have in common is that in both cases new commodity exchange chains were created to circumvent sanctions (mixing products from a sub-sanctioned country with a “clean” one). Most importantly, in addition to the exporting country, chains are created by the consuming country. And it is not always clear who is more interested.

The same thing is currently happening to Russia. The main sanctioned positions are energy carriers, whose share on the world market is very large. Moreover, a large number of countries called unfriendly by the Russian government continue to buy Russian raw materials. The main reason is the dependence on Russian oil and gas. For some states it was much easier not to support sanctions than to refuse Russian energy carriers.

In addition, the withdrawal of some foreign companies from the Russian market was a fairly high-profile event. The presence of foreign countries in some categories was simply irreplaceable, or the companies simply had no competitors. Particularly striking was the official withdrawal from the Russian market of the fast food restaurant chain McDonald’s. Perhaps because the population could take an extremely negative view of the absence of their favorite establishment, Russia needed to buy the rights to all of the chain’s establishments.

The latter example actively demonstrates the self-regulatory ability of the market in the current realities. When one company leaves, another seeks to take its place. For example, Russian gas, from which all the countries that refused to pay for it under the new scheme were cut off, is now gradually beginning to be exported to completely different regions (primarily Asian countries).

In this regard, despite the possible economic crisis in Russia, which may arise against the background of the withdrawal of foreign companies, business will be able to find opportunities to obtain and further increase profitable performance. In the new economic reality, the attractiveness of stand sites, where completely new products and companies are presented, increases. The 25th St. Petersburg International Economic Forum will be such an event in 2022. This platform should be the first such event in the new reality, which was formed after February 24.

Dear SF will there be an article on whether Putin has cancer or this is just BS by msm?

'OSLO FREEDOM'=TEORRISTS
Reply to  i am confused

ALL BULLSHIT,THEY WHO SPECULATED ARE ALSO PROVEN RETARDED SATANIC LIARS,regardless,
Your not dead untill your dead!

i am confused
Reply to  'OSLO FREEDOM'=TEORRISTS

i did not mean to offend you sorry if i did. all i wanted to know if it was real or fake news, now i know its just fake news, i guess the USA & co are losing badly they need to make more lies to cover it up.

waa
Reply to  i am confused

dude run by mi6. one guy made these claim. a ex kgb guy that lives in london. go google him . not worthy of even a response. according to uk papers hes even been dead 2 years and uses a body double. 7 kinds of cancer etc. really bad psyop lies

Yes waa–also said he was suffering from -take your pick-“senility-MS and other problems “–MI6 has sunk to a very low IQ.

These days to make the grade,you must take it up the ass,hence the low iq!

I am now making a good home based income by just doing simple 0nline Jobs.Last month i have made $18745 from this home based Jobs in my part time.

This is just another reason why the Uk is so far gone,why it would take a miracle to attain redemption,as the redeemer,will go on thus prevail over their sodomised goy!

'OSLO FREEDOM'=TEORRISTS
Reply to  i am confused

Remember, they said Trump had all of these health issues and had cognitive problems etc.

Now, they say Biden is very healthy and has no cognitive issues.

After this, you can’t trust anything about someone’s health.

Peppe il Sicario
Reply to  i am confused

Satanic puppet Joe Biden and his slew of affiliated mentally decrepit Jew carpet-baggers will be dead 10 times over before anything happens to Putin.

Pawel Pawel
Reply to  i am confused

Florian Geyer
Reply to  i am confused

Dear ‘i am confused’, get a life you sad idiot.

i am confused
Reply to  Florian Geyer

dude what is wrong with asking question, that i don’t have answer too

opereta
Reply to  i am confused

Get a life Imbecile…. Go watch NCIS or some other Moron’s Super USA Series

i am confused
Reply to  opereta

what is wrong with asking question, that i don’t have answer too, that does not make me an imbecile

Donnchadh
Reply to  i am confused

Whats upsetting posters is your “alleged ” lack of knowledge of world politics –posting on SF requires at least some wisdom on the west’s propagandistic lies.

56-57ish ruble to 1 dolla,not too shabby for a nation full of soviet rust buckets and analogue tech!

During soviet time official ruble to dollar was 1 to 1. If today you are willing to sell dollar for 56-57 rubles you are retarded. Black market price is 200-250 for 1 dollar… and rising fast!

I’m not sure, but the current situation hasn’t gone the way the main mentally ill comedians aka klaun swab, kill gates, jabba the hutt-soros & their evil cohort of fascist liberals around the world expected it to go … huge blow to the globalist cabal (Jewish in mind and feelings) …

The Mofos are on their last legs and desperate with each and every breath they take. A Universal Karma of epic proportions awaits them and is causing such fear in their soul-less bodies they will soon be talking to themselves in front of mirrors trying to assure themselves all is going to THEIR plan. Look to the heavens in the clearest of night skies when the moon is rising to see what they fear and it is no Project Bluebeam hoax.

Car sales in Russia plunged 83.5% in May, the Association of European Businesses (AEB) said on Monday, and new car prices have risen by an average of 50%.

But hey comrades,all is fine, Rubel 56 vs 1 Dollar

You are the one writing about Yen and Japan… I just mentioned Info about russian car market and price development.

Your not very smart are you,fk no!
Firstly,your stats are fullovit,(aeb are fullovit,packa scamming poofs without a clue about reality)
secondly,your a known liar,degenerate and a poof and absolutely no insight into how things work.
Thirdly,you obviously never even manage to change a spark plug yet you think your a champion.
Fourthly,only need to pay 560 rubles for say americans pay 10 dolla for oil,compared to 1200 odd before?savings are huge,knowing too well Russia not Usa produces the real oil!
Enjoy your dudded hyperinflation new woke order,paper weights!
Russia gold backed stocks urrp!

I would assume this is from car sales of vehicles which will not be shipped into Russia anymore so there was limited supply of those.

Russia will just have to meet the demands with China and Russian made cars. The prices will come down very quickly.

Yes they may not be able to buy a land cruiser or Highlander but at the end of the day who really cares.

Car sales also plunged by a similar amount in the UK.

By the way i have to call Lada dealer,if there are still spare parts available for one of my favourite all time off road vehicle: Lada niva/ WAS 2121.

Car sales and Used car prices are 10 times worst in USA you dimwit = Less New Cars Sold since 2019 and Increase of prices of Used Cars from 2020. Mercedes Benz and Audi are going bankrupt in Germany and you conveniently don’t mention it shithead

Discussion was about car sales and price hikes for spare parts,since the begining of war of agression by DüFaZ Putin against Ukraine.

No need for insults.

Anyway thank you very much for ur insider Info about Mercedes Benz and Audi/ VW group going bankrupt, I will readjust my stock Portfolio.

Southfront is worse than reddit. They are purging all comments exposing “the resistance”. I have had over 20 comments purged. The comment section is monitored and censored.

Khomeinei and all other top clerics consider child prostitution (mutah) legal even for babies. The only limitation is that children are not penetrated vaginally, but even if they are, it’s no big deal. They can be sodomized, molested, etc…

I’ve never had a single thing on SF censored. It’s the best site I’ve seen in years for free speech. I do think the comments go offline as soon as a topic is no longer on the front page though. Probably to save server space is my guess.

There can be no real benefit with having thousands of mcdonalds pumping out sub standard food to the public. Mcdonalds won’t be missed.

The first currencies to back their currency with gold will win out, and the economy will look after itself. The world is waiting.

Healthier food,better prices,stronger more robust cars than before are just some of the positives,
doing away with any western middle man and affiliates,also drastically cut the costs for green tape!

Whilst I disagree about food – russian is more toxic than anything – I actually agree that Russia is on a good position with cars. Providing decent and affordable cars not tied up with nonsense eco regulations required by the EU it might be a big winner for ordinary Russians! EU must react quickly and follow the same path – simple cars with small engines must be exempt from unaffordable regulations which requires a lot of super expensive electronics for little benefit!

Wanker in a mask and westy suit simply dont justify the equation,this is why the worlds gone fkd!

Is it a war or a special operation?

It is war of agression,all by DüFaZ Putin’s own choosing and seems like Special operation to turn back against modern Technologie.