On the night of September 16, an armed conflict broke out on the border between Kyrgyzstan and Tajikistan. By morning, the parties agreed on a cease-fire, but clashes reportedly resumed along the entire border.

The sides accused each other of provocation.

The Tajik side fired at border guards and positions of the Kyrgyz military in the areas of Eki-Tash, Chyr-Dobo and Kum-Mazar and Ortho-Boz, after which mortar shelling of border areas began. After that, according to the statements of the Kyrgyz side, the Tajik military began shelling several districts of the Batken region. Kyrgyz soldiers returned fire.

According to the Kyrgyz Border Service, Tajik forces shelled the Batken airport and the areas nearby with rockets. The city’s civil infrastructure was damaged. A border guard was reportedly killed and 11 others were reportedly wounded in Tajikistan.

A T-72B tank of the Tajik Army destroyed in the border area :

In turn, Tajikistan accused the Kyrgyz military of opening “intense fire from all types of weapons towards populated areas”. The press center of the Border Troops of the National Security Committee of Tajikistan stated that Kyrgyzstan “is trying to accuse Tajikistan of continuing the conflict through Internet networks, which has no real basis.”

Civilians are being evacuated from several border villages in Kyrgyzstan:

At about 10 am local time, Kyrgyzstan and Tajikistan reported that they had agreed on a ceasefire. However, Bishkek then claimed that the fire from Tajikistan had not stopped.

Tajik servicemen occupied a school building in the village of Dostuk in the Batken district of Kyrgyzstan, the Kyrgyz border service reported. The Kyrgyz side accused the Tajik military of opening fire from settlements in border villages, thereby causing retaliatory fire, and also using their civilians as a “human shield”.

The State Committee for National Security of Kyrgyzstan also stated that citizens in clothes without identification marks or signs of belonging to any armed formations are fighting on the side of Tajikistan.

The press center of the border troops of the National Security Committee of Tajikistan reported that the agency twice offered to resume negotiations on a ceasefire to Kyrgyz officials, but they ignored these proposals.

The heads of the state National security Committees of Kyrgyzstan and Tajikistan agreed on a ceasefire from 4 p.m. local time, the border service of Kyrgyzstan reported.

At least 42 Kyrgyz citizens were injured in the conflict. According to the Ministry of Health of the Republic, all of them were take to the hospitals with various injuries.

Both countries are members of the CSTO.

The Russian Foreign Ministry called on Dushanbe and Bishkek to take “urgent comprehensive measures” for a political and diplomatic settlement of the conflict.

The Presidents of Russia and Tajikistan, Vladimir Putin and Emomali Rahmon, also had a brief conversation before the start of the SCO summit in Samarkand on September 16. 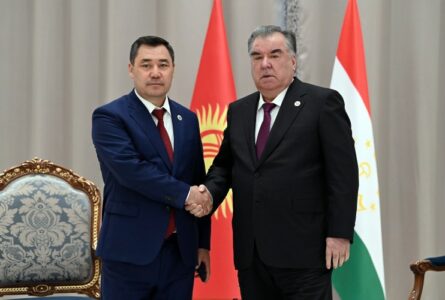 President of Kyrgyzstan Sadyr Zhaparov and Head of the Republic of Tajikistan Emomali Rahmon met on the sidelines of the SCO summit and coordinateв the withdrawal of forces from the border territories where an armed conflict broke out this morning.

A special commission will be set up by law enforcement agencies to investigate the causes of the incident. The parties also reached an agreement to accelerate work on the delimitation and demarcation of the state borders of the two republics.

The length of the border of Tajikistan and Kyrgyzstan is approximately 970 km, the procedures for its demarcation after the collapse of the USSR have not been completed. There is still no agreement between the two countries on 460 of the 970 km of the border. The sides declare their claims to particular territories, as a result conflicts arise between local residents.

Clashes on the border also broke out in mid-June, and at the end of January. Bishkek and Dushanbe managed to agree on a complete cease-fire and the withdrawal of additional forces and means drawn to the border.

The new escalation on the border between Tajikistan and Kirgizstan took place amid new clashes between Armenia and Azerbaijan. While Russian military operations continue in Ukraine, regions on its southern border inflamed. The involvement of the third parties in the ongoing conflicts in cEntral Asia should not be excluded. Washington and its Western allies have significant influence in the region both through the NGO networks and local media. They have means of influence on such conflict situations.

Russia is in the book of Revelation in the eand time, the US is not, cause it is no more he he he 😂

US is circling the drain already. Indebted beyond imagination, beaten and thrown out of Afghanistan. Their currency lost big against the Russian Ruble this year. Looks like US has lost everything and now they desperately trying to put the whole planet on fire. Seems to me, they really want to be wiped out this time. Make no mistake, Russia can finish them off at any given moment. US has never had a working air defense. Hence all that panic when North Korea threatened to nuke them. What a joke the US has become.

@USA#1, knows where his/her loyalties lie, there is no arguing with these people they take after their leadership.

The UK, US axis of evil is probably involved 👹👽

House Rothshild sends their regards. Their agent Lenin killed one tzar and now they want to kill the would be tzar Putin.

This means that there is oil and natural gas there. All the wars in the recent two decades are about it, including Ukraine and the Dnieper-Donetsk Oil and Gas Basin, with the Yuzovsky Shale Gas Block exploited by Shell.

An oil leak from a car is enough for a crooked Zionist nose to sniff around to see if there is money to be made.

Most likely the U.S. hired some mercenaries to wear uniforms of the respective border guards and shoot at both sides, à la Euromaidan.

Imagine this happening on the Belgian Netherlands border. Why do those ppl have to start shooting immediately

One can expect a lot of strange things from proudly illiterate Islamists.

In the enlightened part of the world, this would not happen.

The enlightened part of the world is China and Japan. The rest are ape-monkeys.

The Sunni Muslims could no longer keep the peace and the tradition of killing each other prevailed.

Shut the fuck up slimy reptile.

It was a poor and unintelligent response!

The reason for the hatred and the desire to kill is that they are circumcised against their will and have lost forever the sensitive feeling that the foreskin was meant to protect.

Imagine how the jews must feel …

You act as if Sunni Muslims are the cause of all humankind’s conflict.

The US specialty is mercenary paramilitary ops. Kindof like the Papal mercenary wars in Italy. As long as people accept their printed FRN’s in return for goods and services, they can do a lot from far away.

With the uptick in meetings and apparent cooperation in Asia they want to destabilize. So far Kazakhstan and Pakistan have been their most effective tools of disunion in Asia.

Washington spreading chaos in Asia while Russia is busy in Ukraine.

They made a very poor job of it.

CIA is working overtime to ignite all possible conflicts along Russian borders.
Georgia is next.

and you are spreading lies out of weakness and desperation

Pray tell, what is the truth?

I’ll answer for you: You don’t know, because there is no truth in you and all you can do is whine about the truth others have.

CSTO is NATO from wish.com

How does the US-CIA-GOONS figure into this?

Via some jew and mossad. There is a network of jews infiltrated wherever the CIA needs them for exactly the purpose of starting fires when their Anglo saxon masters need it.