–I jumped up at 3 am. Militiamen intercepted me along the way: “where are you going? Can’t get through there!” I was already up to the bridge, holding her in my hands. What did they mean, I couldn’t get through? She will go crazy, he is bleeding uncontrollably. I left him at the hospital. While he was operated on, I walked on foot here, to Pervomaysk. And waited with her until 3. I hoped to calm her down a little. The bombing is not as severe at night. But I went anyway. I knew the way. Along this route (points at the map). I knew where the snipers were. They are wrong when they say that the shell can’t hit twice in the same spot. I’m all covered with burns. I was knocked out, didn’t hear a thing. One ear was fixed up on Rostov but the other still can’t hear. I’m hard of hearing these days. 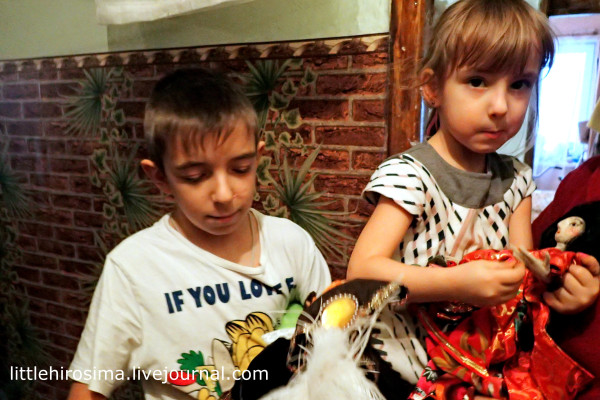 When we arrive for the first time, we know almost nothing about the people. Ruslan said there was a boy here who was wounded in the head and who needed help.
When we came, we were met by a granny with a pretty girl on her hands.
My first question should have been about helping their mother. But when I saw Seryozha, I fell into confusion.
For some reason he instantly reminded me of the hero of the “Welcome, or no entry to strangers” movie. Which constantly says “Well, what are you doing here?”, although not to the same extent. Droopy eared and comical.
But a second later he seemed like a shy Karlsson-on-the-roof. Who dreams about having a dog, loves his sister, and strikes puddles with sticks so hard that they splash all around. I made up the part about dog and puddles, but somehow they fit him. Just as caterpillars, beetles, and tree houses–everything a real boy needs.
–Seryozha, what happened?
He shrugs his shoulders and looks somewhere at the floor.
–There was an explosion. And that’s it.
Garfield looks at me from his t-shirt, and Seryozha in his confusion doesn’t know what to say. Explosion. And that was it.
–Did you lose consciousness?
He and granny speak simultaneously
–No. 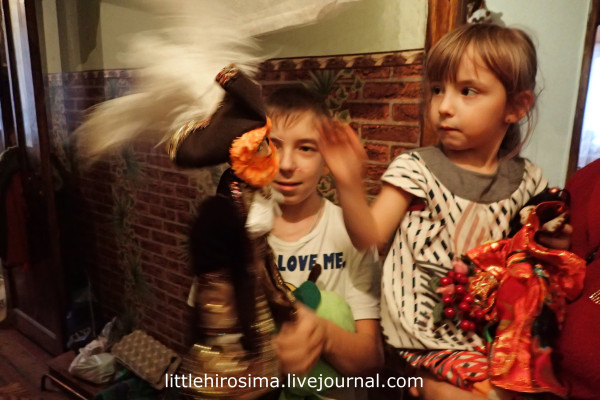 Then Seryozha adds, as if it were trivial:
–Then blood ran and I ran to the cellar. Granny was above.
He doesn’t look in the eye but off to the side the whole time. There is a weak smile on his face which doesn’t leave.
On July 28, 2014, Seryozha was wounded in the head during one of the bombardments of Pervomaysk.
Seryozha was taken to Rostov, was operated on. The scar on his face is from these operations.
–What did they operate on, Seryozh?
–I don’t know. Nose or something.
Granny–Elena Fyodorovna Chernyshevskaya, joins the conversation:
–He had a hole there. They put in two inserts. Now they are sagging. He’ll need another operation.
Granny extends her hand and traces around his nose. Seryozha is smiling slightly and watches the hands.
Seryozha still has shrapnel in his head. Can’t be taken out because an operation like that would be very dangerous for a child.
Diana jumps down from granny’s lap and the shy Seryozha departs for another room.
Granny continues:
–One professor told me that the shell will dissolve. Can you imagine? Dissolve! But it’s metal, how can anyone say that?
Seryozha suffers from severe headaches. Many medicines already cause him to vomit.
Listen to her. Particularly after the 1:57 mark.
About how she carried children from under the shelling. Without even getting dressed. How she scrambled over the fragments.

–After that, Diana didn’t talk to anyone for four months. Sat and covered her head.
I carefully ask about the mother.
–Mother died of heart attack two years prior to the war. The husband beat her up…I got the custody.
I regret asking the question. Granny continues.
–Well, it’s nothing.
Tears run down her face.
In the background, Diana runs into the hallway, sets down a toy and starts to dance around it. Seryozha leans out of the door and smiles his strange smile. Diana danced and danced, and looked at the uninvited guests out of the corner of her eye.
–We lost everything.
For some reason I blurt out:
–Where was Seryozha wounded, here?
–Here? No this apartment we obtained from Olga Igoryevna (acting mayor of Pervomaysk, Olga Ishchenko). Ours was on Makushkina 8. Well, you know.
Makushkina means nothing to me. Absolutely nothing.
–I’m not from Pervomaysk… 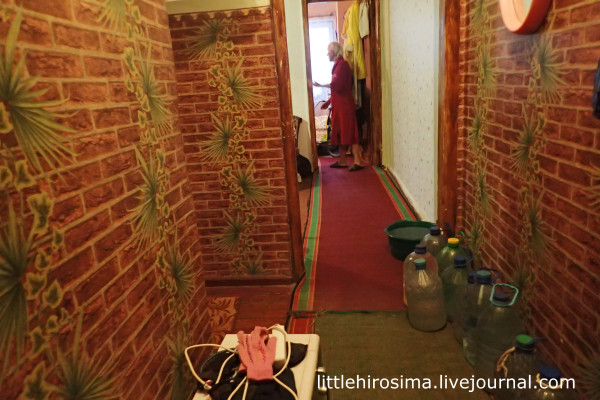 –It was destroyed in February while we were in Rostov. A week before our return. My neighbor went out at night to smoke. And a shell struck our house. Came from Popasnaya. Says he “instantly wet himself.” The blast wave picked him up and he lost consciousness. February 8, 23:06.
Something’s clicking in my head. I turn to Zhenya and Ruslan.
–Wasn’t that during the ceasefire?
I instantly remembered my scariest visit to the Donbass. When we came to Pervomaysk which was all hiding in cellars. The first day of ceasefire, during which the UAF plowed the city’s center with Grad rockets. The first thing I remembered was that house. I  was taken there, and stood next to it a long time. They tried to carry me away, it was time to go, it was dangerous. But I couldn’t.
A bathroom on the third floor survived, right on the corner. There were tubes and brushes on the floor. A mirror still hung, as if awaiting the owner. That day was one of the most memorable ones in my life. I remember it in all details. Everything. The floor. The damned floor.
–Yes, in February. We visited them. I remembered one house in the center, it was destroyed shortly before our arrival–a part of the bathroom survived.
Yelena Fyodorovna is all in tears.
–That was our apartment. 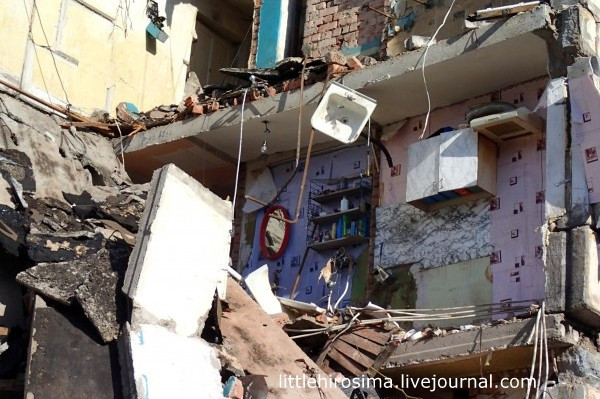 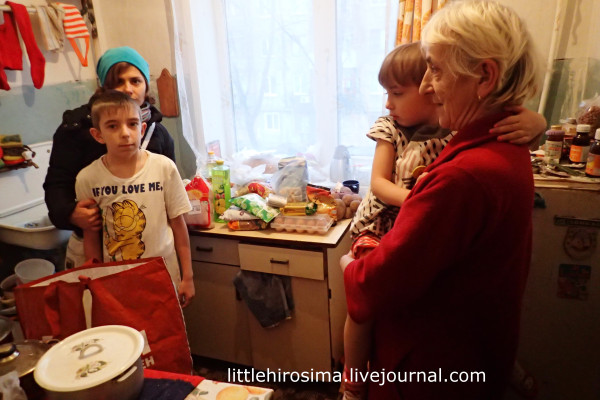