Last night a series of explosions rocked positions of Iranian allies from the Popular Mobilization Units (PMU) of the Iraqi Armed Forces southwest of Baghdad in what was described by local sources as US-Israeli strikes.

The PMU is a coalition of paramilitary group, many of them linked with Iran, that payed a key role in the war on ISIS on the territory of Iraq and in fact rescued the country, when US-backed government forces collapsed under the pressure of the terrorist group. The United States claims that the PMU is ‘Iranian proxies’ and ‘terrorists’, while in fact Washington was directly coordinating its ‘campaign against ISIS’ in Iraq with the PMU because without this force it was not possible to defeat ISIS.

The last night strikes targetd PMU positions near Jurf al-Sakhr, and were promoted by pro-Israeli and pro-US sources as a response to regular attacks of local Iraqi resistance groups on US forces and facilities in the country. The tensions between US forces and locals are especially high since the assassination of Iraian Quds Force Commander Qassem Soleimani and several prominent PMU officers in a US strike on Baghdad in January 2019.

Despite reports about US F-16 jets participating in the attack, the US CENTCOM denied its involvement.

New: @CENTCOM isn't aware of **any** strikes tonight in #Iraq per @Reuters. https://t.co/CbeMDYCDlf

Meanwhile, the Iraqi military reported that there were no strikes on PMU positions. Instead, Baghdad reported explosions on power transmission line poles, which were allegedly conducted by militants (ISIS).

There are also some photos of the targeted transmission lines. Despite this, pro-PMU sources continue to claim that the PMU positions were targeted by strikes.

Last night’s “US airstrikes on PMF/Iraq Army positions” in Jurf al-Sakhr was an explosion that targeted a transmission tower. No casualties. pic.twitter.com/UM467lNyzG

The incident took place as US supply convoys continued suffering from IED attacks across the country. Most recently the attacks took place in the areas of Naseriyah, Diwaniyah and Samawah. As I have described in detail, the Zionist scum are using Saudi airbases to attack Iraq with unmarked F-16 in the desperate attempt to get the scared shitless Americunt arseholes into a war in the region and create life hell for Biden. The Zionists are petrified that Iran will hit them soon, so they will now redouble their efforts to goad the stupid Americunts into a very costly defeat. Killing Iraqi military personnel will only bring Iraq firmly into the Axis of Resistance. Stay tuned kids, the Zionists worst nightmare is coming true.

Saudi Arabia is a complete fabrication invented from whole cloth by the British. It is a great mirage’ that has appeared in the desert.

The House of Saud are pet natives shaped into a fictional ‘Royal Family’ by Lawrence of Arabia and his merry band of British agents.

This abomination which has stood for barely 100 years, invented out of thin air, like ‘israel’ needs to be dissolved back into the sands of Arabia.

the Future is About to Land …

and this is precisely why the jews in palestine must be evicted pronto from the face of earth. there are no excuses available to the jewish scum any longer, the two state solution is dead and the only viable way forward is the palestinian one state solution and the scum jews evicted the hard final way. they, the jews, have forfeited the right to be part of mankind and mankind will be in a happier place once it is rid of the jews.
and this includes the jews that are embedded and entrenched in western world countries and there acting as quislings for and on behalf of the jews in palestine, the jews sure as a clucking bell have studied hitler and copied his map for progress into the future but as mankind managed to stop hitler so will the non-jewish part of mankind stop the jews, the jewish war crimes and the repeated crimes against humanity, the ethnic cleansing and thievery of land and chattel which is an integral part of the jewish identity.

Just Me
Reply to  verner

Trump has left the building and the Zionist mutts are desperate.

Concrete Mike
Reply to  Just Me

Zionist are still well in control in the west, dont get distracted by the smoke and mirrors, that product is meant for our local consumption.

That is quite true and now with geriatric killer Pfizer shots they will even mutate the western sheeple’s dumbed down DNA. 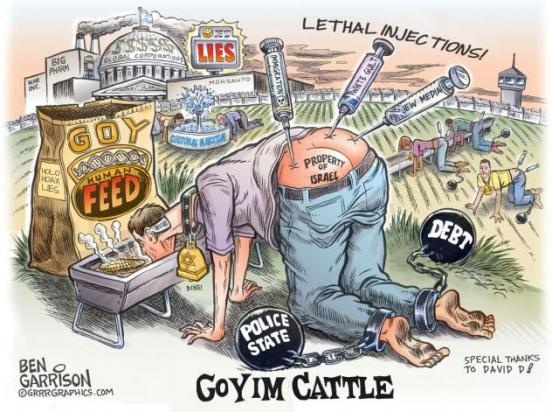 Let’s hope … YOU die from the Sputnik jab

Zionism = EVIL
Reply to  Just Me

tzatz
Reply to  Just Me

Your nazi grandma told you stories of ‘da voar’ ? pmsl

It still ends in nazis dying / dead / starving … and the Jews rising from the dead … eh?

Whose YOUR daddy? pmsl

On his last days, Trump ordered Pentagon to include and integrate Israel into CENTCOM terror force. They bring it on themselves deliberately.

One other interesting food for thought:
Remember a few days ago Sheldon Adelson died? Turned out he wasn’t alone, there were at least 2 more billionaire “deaths”, all 3 supported and donated heavily to GOP and Occupying regime:

Either something fishy is going on or I’m too paranoid.

Maybe a part of the coming anti-Trump purge? I thought they will target his supporters first and foremost, but looks like they want to first erase every trace of the Trump presidency, GOP is weak af anyway. I dont believe in the two-party illusion, but neither do I believe in coincidence… could it be a turf war inside the zionist billionaire club?

Lets take a bet on who’ll be next… Soreass or Kissinger?

I doubt if this is related to Trump or GOP. They wouldn’t eliminate 3 major Zionist billionaires for the sake of one man whose luck is already dried up and everybody left him like a plague. These people change colour and friendship in a heartbeat, Adelson used to fund Democrats before. In addition, their loyalty lies within Zionism, not the US nor Israel, certainly not Trump.

It should be much bigger if those deaths aren’t natural (which don’t seem to be).
More investigation is needed and I’m not the right one to do it. One important field would be (as there’s really no future for Israel) to see if they wanted to move their capital (Adelson heavily invested in Israel, the profit from his casinos and prostitution industry all went there, so did the other 2) and if yes, where? Adelson’s assets are now controlled by his Israeli wife, I don’t know who’s the heir to the other two.

I just hope a real investigative journalist picks the scent.

And you were impersonating to be an Israeli all this time, while you think Hebrew is gibberish. You anti-Semite!
Idiot thought nobody would notice, probably a Wahhabi dog.

Yep the Israel project has failed… once Uncle Shmuel is gone no one will protect them. But their capital was and still is the financial district known as the City of London Corporation! One of the 3 city states, the others are Vatican and DC. With or without Isn’treal, they will continue to subvert and infiltrate

Maybe its more simple. Jezebels Sisters, another secret society. The wives colluding. I mean, we men know women dont we?

I saw that trifecta. My theory is that someone though it was time to close “The Archives” …

I responded above … ya f/kn slug

“Either something fishy is going on or I’m too paranoid”

No. You’re NOT paranoid. Heart attacks and suicides are the go-to methods now. Tober’s death is far too suspicious.

Actually its quite normal 89 years old people jump out from 12’th floor. Depression. Last desperate attempt to get attention from their surroundings.

@tzatz:disqus you are delusional your kind cant solve any issues you will ruin yourselves going forward and become a sacrifice of delusions

Psychopaths enjoy the sweet feeling of seeing hearts and creativity dissolve around them. On top of that, destruction of anything is the most profitable business for usury lenders.

Those money exchangers Jesus kicked out from the Temple, were kicked out from Rome too because they were too extreme even for the bloody Roman Empire: Destruction, usury lending and slave trading.

the messianic maniacs in the zionist usurper entity are after suicide and i said this long ago because they make no other sense no matter how you look at it they want to sacrifice it all for their serpent messiah just like bibi mileikowsky promised to his favorite rabbi imp before the death of that creature
https://en.mehrnews.com/news/168702/Israel-surrounded-by-thousands-of-rockets-Zionist-Gen-says

You know by calling him “anti-Judaism Hater” you basically telling him that he’s a friend of Jews, and you say it as an insult?
You aren’t very bright, are you?

You aren’t very bright, are you? pmsl

PMS? aahhh… You mean your time of the month is close… Now I understand why you are so grumpy! It’ll pass, don’t worry… You poor thing. It’s natural.

Benjamin de Rothschild died at 57 … from a heart attack

EVERYONE’S rant was based on Garga’s garbage … lol

A load of trash …

they’re gone and that is the main point at this time and that many more of that ilk (jews that is) will follow shortly!

Jews are born in Israel daily … 3+ children per woman

Time to give those US bases another headache.

when amerikans murder 1.5 million in Iraq they describe this as dimocracy