Original by Yevdokia “Dunya” Sheremetyeva published on littlehirosima blog; translated from Russian by J.Hawk
Pervomaysk slipped under a cover of fog.
It began with a day of unending rain, from which a column of armor suddenly emerged…
One, two, three, four, five…I lost count.
Lugansk is behind us.
Pervomaysk is to our front, as are the sounds of shells bursting in the darkness. 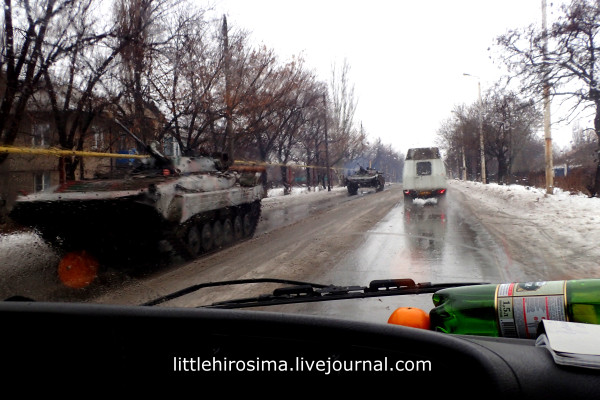 Pervomaysk is literally a ghost town.
–Fog, rain. Everyone’s home.
Friends from the city government are grimly smoking cigarettes.
The city is quiet. Slush and mud all aroundus.
Only Vladimir Ilyich looks into the distant future over the burned out remains of multiple rocket launchers. 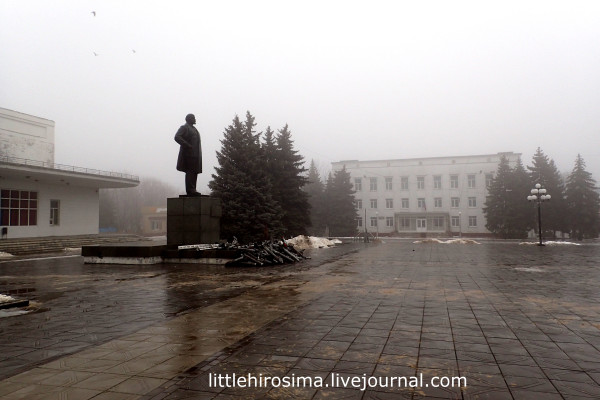 Rostislav shudders from the cold, wet cigarette smouldering in his hands.
I’m bugging him with my endless questions.
–Did many people return?
–Sure. There were 15 thousand in the fall. Now it’s 18-19 thousand.
Many have nowhere to go to. Only 60% of the city receives heat. Some houses are missing their entire stairwells. There is water but not enough. It often can’t reach fourth and fifth floors. Pressure is too low.
Coal is distributed only to vulnerable demographics. The 60th Anniversary of USSR district is not heated at all.
Many people from the city live in nearby towns, Alchevsk, Bryanka, Stakhanov.
All of the public cafeterias are now closed, except for one which services city workers.
–Are salaries being paid?
–Benefits are being paid. Everyone receiving communal services is on the budget.
It means that they are reimbursed upon paying for communal services. Many have nothing to pay with and are in debt.
There are jobs but they pay little. –Is the city rebuilding?
–Slowly. Public facilities first. Nearly all schools have been rebuilt.
–What about School No. 1?
I recall the shattered school with the cafeteria which Graham Phillips managed to photograph during shelling.
When we visited it last spring, the bell was jammed. The weather was exactly like today. Melting snow, rain, and the prolonged ringing of the bell announcing the start of class.
–No, that school was not rebuilt. But all the others were.
This is School No. 6. Heavily damaged. Now it’s open and receives kids every day. All other schools and kindergartens too. And this is House No. 13 in the 40 Years of Victory district.
It has windows again and is more or less restored. 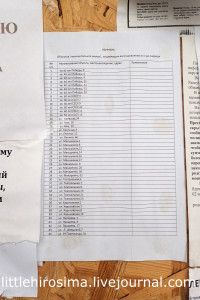 No other city in the Republics suffered as much as Pervomaysk. At least nothing I’ve seen can compare. Not Debaltsevo, not Uglegorsk, not Gorlovka. I haven’t seen that level of destruction anywhere. 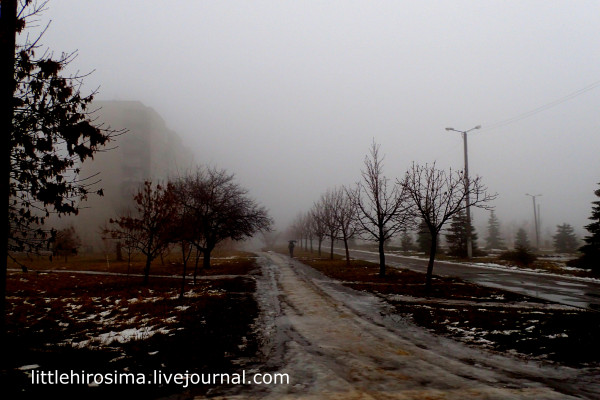 –Is it quiet here?
–Much shooting at night. Apparently OSCE hasn’t noticed. Ukraine brought up much equipment up to the border. And the main thing is that they are keeping at it.
–Shells hit the city?
–No damage in the city for a long time. But recently a family was shot up in a car.
The driver was wounded. They were driving toward Popasnaya (on the Ukrainian side), wanted to get to the other side. Nobody knows what happened but the car was all shot up. I won’t lie to you, no clue what happened.
–Why were they going there?
–Everyone’s doing it. They drive up to the checkpoint, leave the car, cross on foot. Everyone goes this and that way because everyone has relatives on the other side. Why not cross? Everyone crosses.
I recalled a story by a friend told to me about a month ago concerning the upcoming offensive.
–Dunya, I’m telling you there will be an offensive on such-and-such day! The old woman who sold us moonshine told us.
–And how does she know?
–What do you mean, how? Ukrainians are also buying moonshine from her, they told her everything. 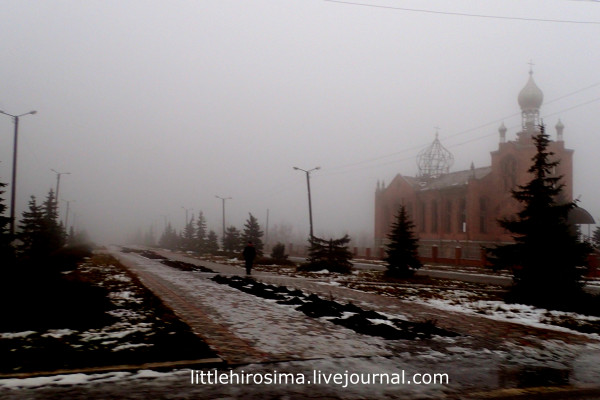 Olya Ishchenko walks up to the city administration. Inexpressible exhaustion and worry in her eyes. She’s barely standing up. Completely out of it. She tries to smile. But she doesn’t quite manage.
–All in order?
–As always.
We left pretty late. As we were departing we heard the incoming artillery shells, as if right next to us. Lound bangs.
Rusik replis
–Far away, about five klicks.
That’s how we left the city, with an elusive sense of sadness and worry. I remembered when I returned to Lugansk.
I remembered it all at once.
Zhenya Ishchenko was killed on January 23. Almost a year ago.
Dremov was killed slightly earlier, Mozgovoy before that.
I saw Zhenya only once. Impossible not to remember–charisma out of this world, huge and warm hands and a very hard stare.
He was broad-shouldered and created vortexes of life and energy in his wake.
It was written somewhere he spent 15 years in prison for murder and was a member of an organized crime group.
I’ll just say what I know.
Yesterday we visited a family, brought aid. The woman, Marina Nikolayevna Bovgirya, lost five relatives in an instant.
They were all hiding in a dugout in the garden. During a bombardment in July 2014.
The shell struck the adjacent garden. They all suffocated from carbon monoxide.
All at once.
Marina Nikolayevna spoke at length about what happened.
Suddenly Ruslan, our friend who helped with distribution, says:
–Isn’t that the dugout from which Zhenya got people out?
–Yes, yes, may God give him health. He really helped that time. He carried them out himself. Turned out they were all dead.
At that time everyone ran from the city. It emptied out and was left to its fate.
When I think of Zhenya, I see only one scene described by different people.
I didn’t see it, but for some reason I see it clearly in my mind and with all the details. Zhenya’s every motion, absolutely in harmony with that story.
One time a Grad rocket fell onto the city and did not explode.
So it’s sticking out of the asphalt. EOD from Stakhanov is summoned. But they refuse.
Shenya took it with his hands and dragged out of the asphalt.
I can see his hands grabbing the long pipe of a rocket. I see people yell at Zhenya that he’s nuts and an idiot.
Zhenya puts its in his car trunk and takes it out of the city.
Zhenya, Pervomaysk remembers.
We remember.