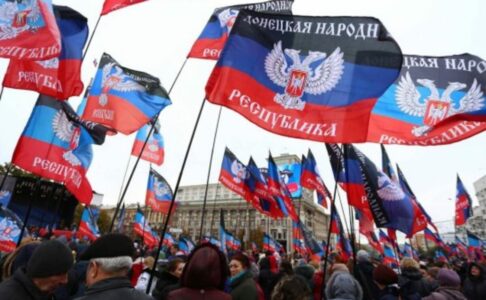 Goals of the special military operation will need to be met and they include areas far beyond the Donbass, Kherson and Zaporozhye regions, as there are tens of millions of other people still living under the jackboot of the Neo-Nazi junta in Kiev.

On Wednesday, September 21, Russian President Vladimir Putin addressed the people of Russia and made several important announcements. He briefed the citizens on the progress of Russia’s special military operation in Ukraine and also announced an immediate partial mobilization amid surging Kiev regime forces attacks, primarily aimed at the populations of DPR, LPR, as well as the Kherson and Zaporozhye regions. The areas expressed a clear intention of joining Russia and are now being subjected to reprisals by the Neo-Nazi junta. These war crimes are hardly unexpected, as the Russian-speaking people living in eastern, southeastern, southern and southwestern areas of Ukraine have often been referred to as “Untermensch” (or “subhuman”) by the NATO-backed Neo-Nazi clique which hijacked Ukraine in 2014.

Shelling and other forms of attacks against civilians in Donbass have been a daily occurrence for nearly a decade now. Approximately 15,000 people have been killed in this way until February 24, when Russia launched its counteroffensive against NATO’s crawling encroachment. However, the Kiev regime forces never stopped shelling the DNR and LNR, albeit the latter has been fully liberated, negating the enemy the chance to conduct widespread artillery attacks. Still, Donetsk has been under near-constant artillery attacks, especially in recent months, after the political West (primarily the United States) sent new artillery systems, including the HIMARS. To save the population, Russia evacuated millions of people from these areas and beyond (including from Kharkov and Kherson regions).

All of this has either severely disrupted or completely halted any significant economic activity in these areas, in addition to the fact that other civil services are operating under wartime conditions or aren’t operating at all. In this way, the Kiev regime has shown that it doesn’t only consider the people of Donbass hostile, but even those living in other regions it lost control of, be it the Kherson, Zaporozhye or Kharkov regions. The Russian air defense units deployed in all of the aforementioned areas have been shooting down dozens of missiles fired by the Kiev regime forces daily, which is preventing the number of casualties from being exponentially higher. Still, the attacks continue and are not only limited to shelling, but also include terrorist attacks and other forms of subversion aimed at disrupting the lives of the locals.

To prevent all this, the local administrations of the Donetsk and Lugansk People’s Republics, as well as the Zaporozhye (currently operating in the city of Melitopol) and Kherson regions decided to hold referendums on joining the Russian Federation. The votes will be cast from September 23 to 27. The Kiev regime has already started its intimidation campaign, targeting civilians and sending death squads to assassinate anyone it considers connected to organizing the referendums. At least a dozen people from the Kherson and Zaporozhye regions’ civil administrations have already been killed in this way. However, this is highly unlikely to change the outcome of the vote, especially now when Russia’s patience has all but run out.

Securing these areas, driving out the Kiev regime forces further away and preventing artillery and terrorist attacks is the priority which also requires far more troops than the ones already deployed in these regions. Thus, Russian President Vladimir Putin announced low-level mobilization which will include hundreds of thousands of fresh troops. According to various reports from the Russian Ministry of Defense, up to 300,000 additional troops will be mobilized and most likely sent to the four areas to maintain security and assist Russian units which are already there. According to Russian sources, new troops will include reservists with previous military experience. This low-level mobilization pool represents just over 1% of Russia’s full mobilization capacity.

It is still unclear how and where exactly the Russian military would deploy these additional forces, but it’s safe to assume that certain counteroffensive actions will be necessary to drive out the Kiev regime forces from the regions of Kherson and Zaporozhye, as well as from the occupied parts of the DNR. These actions are most likely the priority in order to stop the near-constant heavy shelling, as well as to prevent the Kiev regime forces from terrorizing the “noncompliant” locals in the areas they still control. In addition, it should also prevent or at least disrupt the actions of the aforementioned death squads operating in the areas which have already been liberated.

According to the local administration of the Zaporozhye region, late last night, an explosion occurred near the central market in Melitopol. The detonation occurred in a clothing store, injuring at least three people. Similar attacks on civilian infrastructure and local residents are being reported in both former Ukrainian regions in addition to the regular shelling of the DNR. Apart from preventing the further senseless slaughter of civilians, Russia will need to secure the aforementioned areas to allow the locals to finally start living normal lives. To accomplish this, other goals of the special military operation will need to be met and they include areas far beyond the Donbass, Kherson and Zaporozhye regions, as there are tens of millions of other people still living under the jackboot of the Neo-Nazi junta in Kiev.

Russia needs to win the war first then think about referendums. This way they only endanger people living there even more. Although if Russia lose the war they will be eradicated and genocided by Ukronazis in any case.

One thing is for certain: there will be no Russians left in ukraine after this war.

If Russia lose, they will be expelled to Russia. If Russia wins, they’ll be in Russia.

It’s like the US should defeat Mexico first and then consider annexing Texas and California, right?

You have a point, but how will the safety of the people in the areas where they can vote, develop, when there is not enough land to protect them, and when UAF bombs at least every bridge into smithereens? And what will it mean for the loyalty of the people who are now voting?

But in that case for media it is ok

[Warning to the hidden moderator: This comment contains mild criticism of Putin. Will reCAPTCHA censor it?]

There’s truth to what you’re saying, Leo. Minsk was a better solution in terms of protecting civilians in the DPR/LPR. I’ve worried about the fate of the Donbass people ever since Putin invaded. Why didn’t he support them back when Zakharchenko was in charge and Givi and Motorola were commanding powerful armies? Why didn’t he send troops back in the days of the victorious Novorossiya Armed Forces? He turned his back on them then. Let’s hope Putin has the power and wisdom to finally save the good people of Donbass now.

Morons for Profit
Reply to  Leo

Listen to some Alexander Mercouris podcasts (Duran) on rumble, or listen to militarysummary podcasts, indexed on telegram. After the referendum a much stronger protection of these states is possible. The RU military can then respond to any attack on their territories with far fewer restrictions than they’re able to respond with under current rules of engagement. They are taking their gloves off now. And if that proves still inadequate, they’ll be putting on brass knuckles.

Ukraine is a corrupt Nazi failed state manipulated into suicide by Zionist cokehead Jew Zelensky. Russia is the largest and RICHEST country on earth. It is a no brainer that the sensible people of Don Bas and eventually all of Kievan Rus will join Russia and prosperity.

The referendum is a good move and we hope that Russia will continue with the same practice with each subsequent liberated area. After the referendum and the annexation of those territories to the Russian Federation, the Russians have a whole series of moves that were impossible until now due to the nature of the special military operation. With the entry of those territories into the RF, Russia has complete freedom to implement a harsh action to suppress any form of subversion on de facto Russian territory. Russia will also have a full constitutional right to flood those territories with police who will take over security duties while the army will be free for further tasks. In the same way, all other ministries will take concrete steps to completely separate the consciousness of that people from anything related to Ukraine. With such a move, Russia provides security to that people because that people has been in a very unenviable situation until now – they are at war with forces loyal to the Kiev junta, that people cannot survive on its own, and they have no long-term security with the Russians. With the referendum, that people gets security and will behave completely differently and with a much greater commitment to preserve what was given to them…

The Day of Reckoning is Soon Upon Ukraine

How could it help? Well, it might remind Ukrainians that their purposeful killing of civilians in Donetsk and beyond might have some ever more harsh consequences.

Rise up, you brain dead Ukrainians. Overthrow that hellish regime of godless fascists the neocons pushed onto you. They have lost all rights to govern you, assuming they ever had them.

Young Russians don’t want to die in war. They are sick and tired of all Great Patriotic War propaganda and militaristic chauvinism. Putin miscalculated what young Russians were thinking. He has lost.

NYT Editorial Board
Reply to  Elgar

I love your brand of wishful thinking. Have you ever thought of packaging it and selling it on Amazon? We could help. Drop us a line.

Morons for Profit
Reply to  Elgar

A message from your friendly troll farm^^^

You are worried so much about Ukraine will loss to Russia.

Russian military incompetence has been staggering but not suprising if one remember how they have always lost much more soldiers than enemy even when winning.

The Golden Horde in 8 of September 1380 and 1480 (there was no battle, mongolian remnants of khan Ahmat didn’t dare to attack). 1240 – battle of Novgorod against Sweden on Neva river and in 1242 – against Teutonic order, german knights lost a will to attack for 20 years. These 2 were very coward strikes approved by the Pope as the part of the Northen crusade, because 1237 is the year when mongols invaded ancient feudal Rus’ and conquered major cities as Vladimir, Rostov, Ryazan’, Suzdal’, Kiev, Chernigov, i.e. more than half of all lands. The country was in ruins, germans/swedes/Vatican decided to use this weakness and to conquer independents principalities to convert them to catholics and local peasants to german slaves. This is what happens now in the Ukraine, just replace “catholics” with “democrats” or “nazis”. Different labels, same goal.

The trait d’union along ages are templars and jesuits

is that a cigar in your mouth or Biden’s turd?

They probably haven’t been wearing enough high heels and lipstick to stiffen them up.

Let’s eat shit and snort together.

Marx brothers, like you, were all transvestites. But they at least made people laugh

As long as west ukraine is untouched nothing will change. Russia should have bought carnage to all of west ukraine.

The Kiev cockroach captagon cocaine crews and their NATO trannie brigades are wasting their time. Their system is collapsing and they are fiddling in Ukraine. Its Rome all over again. The West has always been a hotbed of degeneracy

It did not help Crimea, so…

Ones a while i reply

So Russia is using Iranian drones and now even Korean soldiers? Sounds like a act of desperation. What happend to “the war will only take a couple of days” or “there will be no mobilization”.