On January 29, a small explosion rocked APJ Abdul Kalam road a few meters away from the Israeli embassy in the Indian capital of New Delhi.

Delhi police said the explosion was caused by a “very low intensity improvised device.” Three cars were damaged. No casualties were reported, however. The police called the explosion a “mischievous attempt to create a sensation.”

Photos reportedly from the scene of the IED explosion near the Israeli embassy in New Delhi, damage caused to a number of vehicles, no injurieshttps://t.co/dgzZJlu4pz pic.twitter.com/XoNJKajhq5

The Israeli foreign ministry said that the incident is being investigated by Indianan authorities, who are in contact with the relevant Israeli authorities.

Following the incident, Indian Foreign Minister S Jaishankar assured his Israeli counterpart Gabi Ashkenazi that Indian authorities are protecting the embassy and will spare no effort to apprehend the perpetrators.

“Although there were no casualties, India and all elements in Israel regard the explosion as a terrorist incident,” an unnamed Israeli official told Reuters.

This was not the first such attack. In 2012, a blast near the Israeli embassy in New Delhi injured a wife of the Israeli defence attache to India, her driver and two others. Iran was blamed for the attack back then.

Iran held Israel responsible for the assassination of its top nuclear scientist Mohsen Fakhrizadeh last year.  Back then, senior Iranian officials vowed to respond. Nevertheless, there is still no evidence linking Tehran to today’s explosion in New Delhi.

This is a total false flag. Iranian vengence is not limited to a tiny explosive ied, and especially in india. Typical Mossad dirty work to weaken iranian -indian ties and to expose iran as interational threat.

Indian media has confirmed that it was a false flag with a single dynamite stick left in a parked car of the street. Israeli embassy staff, especially their “cultural and educational attaches” aka MOSSAD is being investigated.

Thank God … these Iranian slugs are so f/kn inept

Rocks not an explosion of any kind. Mossad needs to a better job indeed.

Just Me
Reply to  tzatz

tzatz
Reply to  Just Me

Didn’t you accuse me of doing just that last week? lol

That is a firecracker.

THIS is what a bombing by Iranians looks like (US Marine Barracks, Beirut, 1983): 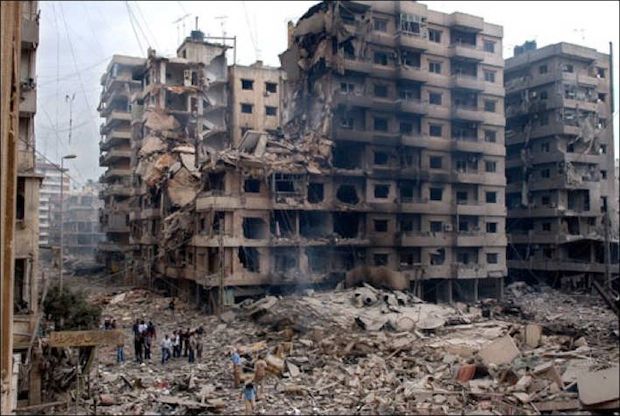 If this was Iranian, there would be no israeli embassy left.

FFS… A few minor corrections, if I may:

1) The Iranians didn’t bomb anyone in Beirut – ever. That was just the Israeli/CNN narrative. Doubtful that Hez even did it. Only ONE country stood to benefit by dead U.S. Marines back then: Israel.
2) The Marines shouldn’t have been there at all – they were sacrificed to salvage the colossally fucked up and failing U.S/French/Israeli regime change op in Lebanon that devolved into a costly and totally unnecessary civil war. The Marines were used as human shields, and it backfired on us. We bailed out completely a few months later rather than help Israel. The Pentagon knew.
3) The suburban Beirut building above was hit by an Israeli airstrike, not a flying car bomb.
4) The Battalion Landing Team’s barracks are pictured below: 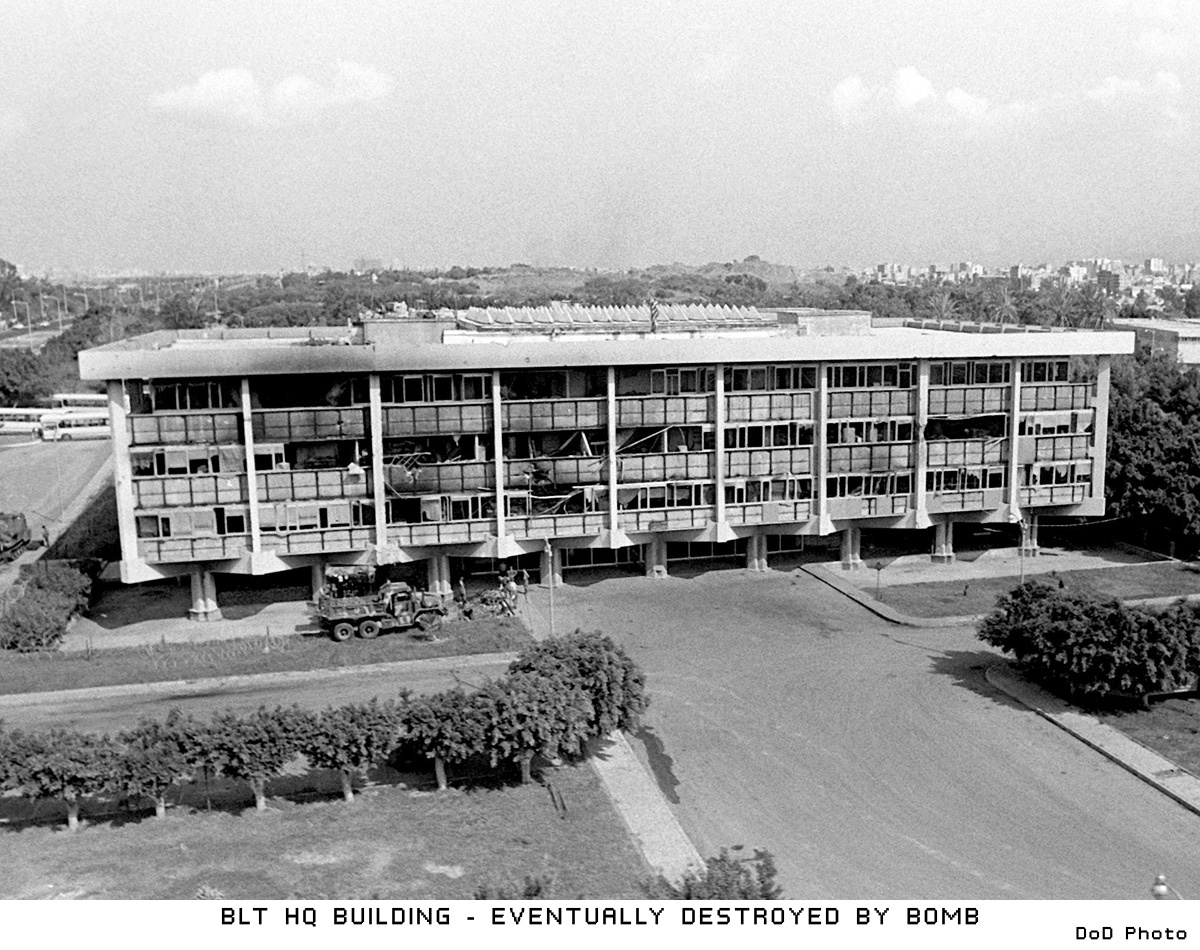 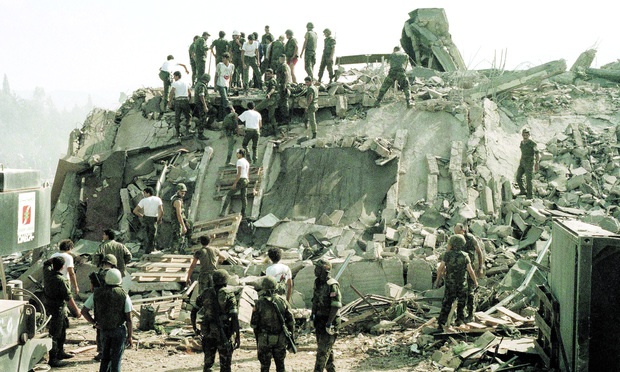 Ah yeah, that one looked a bit odd. The bottom one is what I remember … that will do just fine.

As for who dunnit, hard to tell. I’m sticking with Iranians, until the evidence eventually comes out.

Hezbollah, apparently, wasn’t around back then.

The favourite culprit is Islamic Jihad … but who knows, hey?

israel … there’s as much proof as there is for Iran. I’ll go with iran.

As for who dunnit, hard to tell. I’m sticking with Iranians, until the evidence eventually comes out.

The FBI forensic scientists already figured out where the tagged HMX/RDX explosives came from, and NO, that evidence implicating Israel and exonerating Iran will NEVER come out. That’s not how it works in the U.S., and they would just flip it around, lie and say the forensic evidence points to Iran. Remember Iraq’s WMDs?

For decades, the treasonous FBI has shielded Israel for killing U.S. Marines. I will never forget, but I’m a nobody. They really don’t give a damn what I think and the Marines (like the crew of the Liberty) are disposable meat units when it comes to the U.S. government protecting Israel.

This is a non event and staged one. Did not make news even in India. Delhi is having Sikh problems anyway and most is under curfew after the Red Fort was occupied by Khalistan movement. 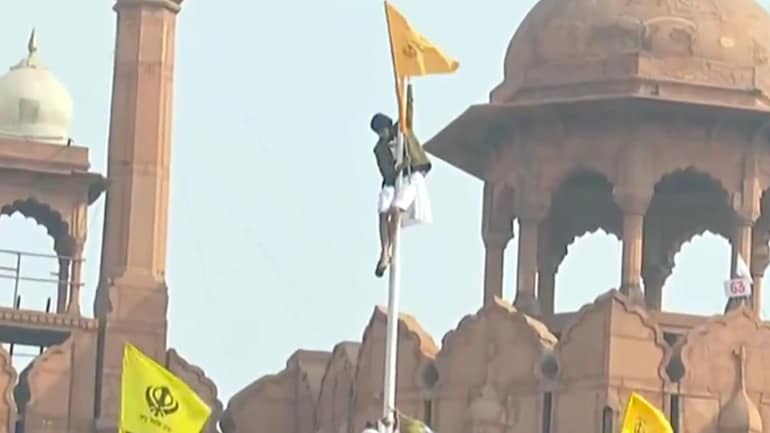 This is certainly not a credible report as the glass damage look like a rock thrown in at a parked van. This is no sign of explosives as there would be a burn signature and exploding glass, not breakage.

I wouldn’t give those guys any credits. Frankly I wouldn’t put any stock in what the FBI say.

I think the iranians engineered, with the aid of whoever, the sequence of events leading up to those bombings.

I don’t think the bombings in South America had anything to do with Iran or Hezbollah though.

It was around back right then. And Israel and colonialists that started War in Lebanon and messed all up started to loose all until 2006.

Pretty destructive. We can debate forever about who did it, but my money’s on either I.J or Hezbollah with Iranian aid.

Iran had nothing to do with it. In fact, none of the bombings that western government attribute to Iran (this one, Jewish center in Buenos Aires, Mikonos restaurant, etc.) used the equivalent of today’s “highly likely” language of that time and no evidence ever pointed to Iran whatsoever. As if evidence really matters for western governments, just repeat and more repeat referring to the first repeats so it becomes carved in stone.

This one stinks of false flag from afar (just a bang with no real damage, but really useful to pressure the US government to not even thinking about returning to their commitments under JCPoA).
Like the new attacks on Ruyadh where Saudis suddenly become so competent that they manage to intercept and destroy not once, but twice the “missiles”, the same Saudis whose radars and air defence systems are destroyed one after another by very simple Yemeni drones and they never find where the attack came from, all complete with a poster mirroring 9-11 attacks on Dubai while everyone knows the crime boss and mastermind of the Yemen disaster resides in AbuDhabi.

Israel is desperate as its plans are going awry and is a staged event and not really a bomb or anything.

It looks it’s bombed from the air.

It actually does. Now why did these clowns put that one as their leading picture for the beirut Bombing!

Western media can’t be trusted to get a simple story straight.

Self inflicted wound meant to establish a narrative.

I’m sure “an accident” can also happen to some Iranian embassy somewhere around the globe. They better don’t go down in that path, or else they will get the same medicine.

Stop fooling yourself and others, you know best its just a show by the mossad. The question is did india know and have hand in it.

We don’t do such terroristic acts like you, but it doesn’t mean we can’t do it. India will investigate it, let’s wait for their results. If Iran was behind it, then expect a response.

klove and light
Reply to  <>

when the tide turns in the US…….the survival time for the illegal satanic criminal entity named israel is less than 60 minutes……

you folks are a bunch of lying, criminal satanic cowards…..always were…always will be……

u stink! and no parfum in the universe can change that!

You do false flags all the time, like this one:
https://www.independent.co.uk/news/world/americas/jewish-man-andrew-king-spray-paint-swastikas-new-york-schenectady-nazi-own-home-a7643996.html

Or Lavon affair, look it up. It’s all your regime does to accuse others.
Also a good read:
https://www.middleeastmonitor.com/20200829-israels-false-flag-anti-semitism/

And finally, let’s not forget this psychopath:
https://www.youtube.com/watch?v=9Zl4NpPLV3I

Is there anything your regime does which is NOT a “terroristic act”?
Deflect much?

Yet again I repeat, let’s stick to pretty girls. It is less embarrassing.

Who is the terrorist?

Could be Free Man ;)
But I think that it wasn’t us now, we will wait for the official report from the Indian authorities and then decide.

I was just joking regarding the accident.
Air raid sirens sounded around Tehran for the first time since Iraq-Iran war.

Rubbish, Iran has a very good civil defence system that was installed during the Shah’s era by US contractors and has been upgraded since then and linked to a national grid. These tests occur every few months and Tehran metro is also a NBC safety zone.

You being the Jew from Poland, Hungary, Ukraine
on Arab land against the wishes of the people, right?

your racism is pathetic; Zion is Iraqi–fluent in Arabic

The play group not meeting today? due to prolonged lockdown.

They have over 120 cultural, political and educational attaches aka MOSSAD agents and then there are regular “businessmen” and “academic” coming and going to Kashmir and now Punjab where Sikh independence movement is being revived.

Look out for paedo rings.

The Jews are big on paedo rings.

Wherever there’s mossad outfit you can be sure there’s child trafficking going on.

No you chutiya this is a staged event and even Indian media dismissed it.

It describes you and your efforts to defend the oppression regime of the mullahs:
“میمون هرچی زشت تر است بازیش بیشتر است”

Highly unlikely. This is not even an explosion as judged by the shattered glass due to rocks.

Where’d you get those headlines from, The Onion?

Iranians killing middle aged Israeli bureaucrats to avenge the death of their top officials, doubt it and I hope not. Israelis staging a near miss to blame Iran? Not impossible.

israelis don’t have anyone on the level of Iranian officials.
There’s no one worth taking out – they’re all useless sacks of shite.

Israeli creating their own false flag.

this is how kochavi is attacking iran XD

doubt that Iran wouldsubscribe to an attack that would put civilians at risk – so no this is something else. the jews however happily will blow children and women to kingdom come for no other reason that it might hurt some Iranian interest. that’s the difference between the jews and the civilized Iranians who all hail from the good part of mankind whereas the jews are superfluous to the world’s future.

It wasn’t Iran…what the fuk do you have to make such claims but to fall right in Zion hands?
Show me proofs of it…Iran is sure as hell is not the only country that don’t like Zion and remember when Zion the ones to talk first it is 100% BS.

BTW India coming back to Chabahar port deal (Iranian port) after Trump left.
Couldn’t find the link to it but India send some ships which had some parts to improve the port which is part of Chabahar port deal.

Frist Zion said they want to attack Iran…Iranian called their BS and yes it was BS, and now EVERYONE to their fuking mother pointing the finger at Iran…what do you have to back it up….
I like how some time you guys no fuking different than MSM…yeah even it is blaming game it is only Zion winning at end of it, haven’t you fuker understand that yet?
ZION KILL THEIR OWN KIND FOR FUKING MONEY, ask Iraqi Jews what happened to them…go on. Who start killing Iraqi Jews, ZION.