On Friday, the Iraqi Army and the Popular Mobilization Units (PMU) captured al-Sa’ad and Second al-Wihdah districts in Tal Afar town in northern Iraq. With this move, government forces besieged dozens of ISIS fighters in Baghlar, al-Nida’a and Karki districts in the center of Tal Afar town.

During its advance government forces killed 81 ISIS fighters and captured a large ISIS VBIED workshop in the center of Tal Afar area. The army and the PMU also captured a media center of ISIS and an ISIS depot and workshop for drones.

The ISIS-linked news agency Amaq claimed that ISIS fighters killed 13 PMU fighters during clashes on the Hasnkoy street near al-Nour district in the eastern part of Tal Afar town.

According to Iraqi sources ISIS begin relying mainly on VBIEDs and IEDs attacks and snipers to stop the Iraqi forces advance in Tal Afar town.

This is great progress by the Iraqi forces, much faster than I expected.
It appears that the US statement of 2000 ISIS in the pocket is pure BS. GOOD NEWS 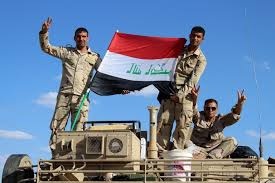