On September 20, the Iraqi Army and the Iraqi Popular Mobilization Units (PMU) began its attack on Anah town 85km west of al-Qa’im city located at the Syrian-Iraqi border, according to Iraqi sources. The advance started after the Iraqi forces successfully besieged the town from 3 directions.

Iraqi forces are slowly advancing because of a high number of IEDs planted by ISIS fighters around Anah town. However, Iraqi sources believe that the town will be captured within days epically that ISIS fighters are evacuating their families from the town. In a related development, Iraq Prime Minister Office announced in an official statement that Iraq Prime Minister Haider al-Abadi arrived to al-Makhmur town east of al Hawija. According to the official stament, the al-Abadi inspected military forces, and reviewed the plans for the upcoming operation to liberate the Hawija pocket south of Kirkuk city.

Meanwhile, US Army Colonel Ryan Dillon spokesperson for the US-led coalition announced that the Iraqi Air Force dropped 3million leaflets in Hawija and Sharqat areas. The leaflets called on ISIS fighters to surrender, and provided safety instructions for civilians according to Colonel Dillon.

GOOD NEWS, THE IRAQI ARMY IS ON THE MOVE.
IT’S TIME TO CRUSH THE CALIPHATE !! HAHA 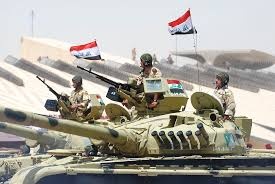 at last…they were sleeping for years.ISIS took hlf of iraq in a few hours and all they did was watching the news

Yes they took half the land in the years the US was (fighting ISIS) . Once the Russians made them look bad by realy fighting ISIS in Syria , they tried to make it look like they were there to help. Strange how ISIS they got all these new US weapons .

its very simple…..2billion $ of weapons are not accounted for……billion….lost in the desert…..maybe nomads have them….maybe rats ate them…..maybe ISIS fighters found them buried in the sand and took them in order not to pollute the enviroment .

What puzzles me is why did Iraq suddenly start its operation in Anbar as suddenly as they stopped it in April? Did the Iraqi Army really need 4-5 months to prepare/liberate Tal Afar?

Syria was pushing the border and this would have freed the DE region sooner and borders would have fallen under Syrian/Iraqi control sooner, limiting the escape of ISIS agents. The US themselves didn’t have the resources to extract them without explaining why their air assets were being diverted to the extraction of terrorists, the alleged family members were all top commanders in ISIS.The Syrian army was restrained by equipment shortages never manpower shortages, now they have more equipment and munitions pouring in 4 cargo ships tied alone to this job and now addition 7 more, China is the new player here.

Let’s hope the US doesn’t go whole hog stupid as they have a tendency to do,but if wishes were camels the dung would be everywhere.

US interference , they don’t want ISIS beaten , Iraqi army witnessed over 100 weapons drops to ISIS held territory . Accidental ? , maybe a couple of times , but over 100 . That is the major reason for the creation of the PMU’s , outside of the chain of command . They can and do fight ISIS . But they must tread carefully around US war machine .

That makes much sense, thanks!

Yes because of heavy casualties in mosul battle

I wish they would forget Hawija for the time being and go for the border in full force!