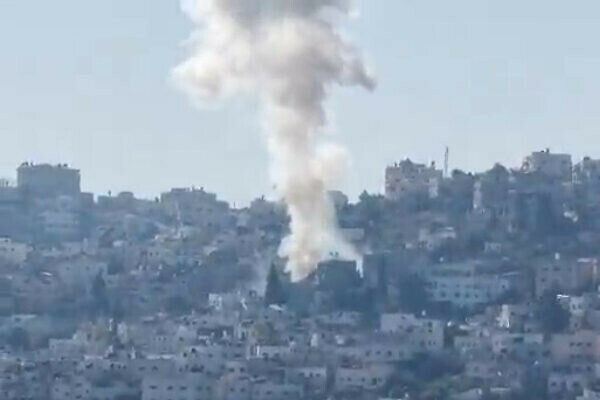 Smoke rising from Hazem family home where the two Palestinian gunmen were hiding. Via Twitter.

On September 28, four Palestinians were killed and dozens others were wounded during an Israeli military raid in the northern West Bank city of Jenin.

The target of the raid was Abd al-Rahman Hazem, the brother of Ra’ad Hazem who carried out a deadly shooting attack in Tel Aviv in April, and Muhammed Alownah. The Israeli Defense Forces (IDF) said that the pair were responsible for a series of shooting attacks in recent months, including one that targeted a military engineering vehicle working along the northern West Bank security barrier on September 13. The military added that the gunmen were in the planning stages of additional “terror attacks.”

Israeli troops surrounded the home belonging to the family of Hazem, before engaging in a fierce fire fight with the two wanted gunmen.

Palestinian media reported that Israeli troops fired a small rocket at the gunmen, but the IDF and police said that the wanted gunmen set off a large bomb as troops attempted to enter the home.

“The security forces fired back according to standard operating procedures and the two suspects were both killed,” the IDF said in a statement.

The Palestinian Health Ministry said that two people were killed in the clashes, and 44 were wounded. Some of the wounded are reportedly in a critical condition.

In response to the deadly Israeli raid in Jenin, Fatah called for a “day of rage” and a general strike across the occupied West Bank.

From his side, Israeli Prime Minister said after the raid that Israeli authorities “We will not hesitate or be deterred to act against anybody who tries to hurt Israeli citizens or our security forces.”

Jenin is slowly becoming a stronghold for Palestinian resistance in the West Bank. Earlier this month, a senior IDF officer, the deputy commander of the Nahal Brigade’s Special Reconnaissance Unit, was shot and killed during a fire fight with two Palestinian gunmen next to the Jalameh checkpoint, just north of Jenin.

Is entertainment in watching the religious idiots kill each other.