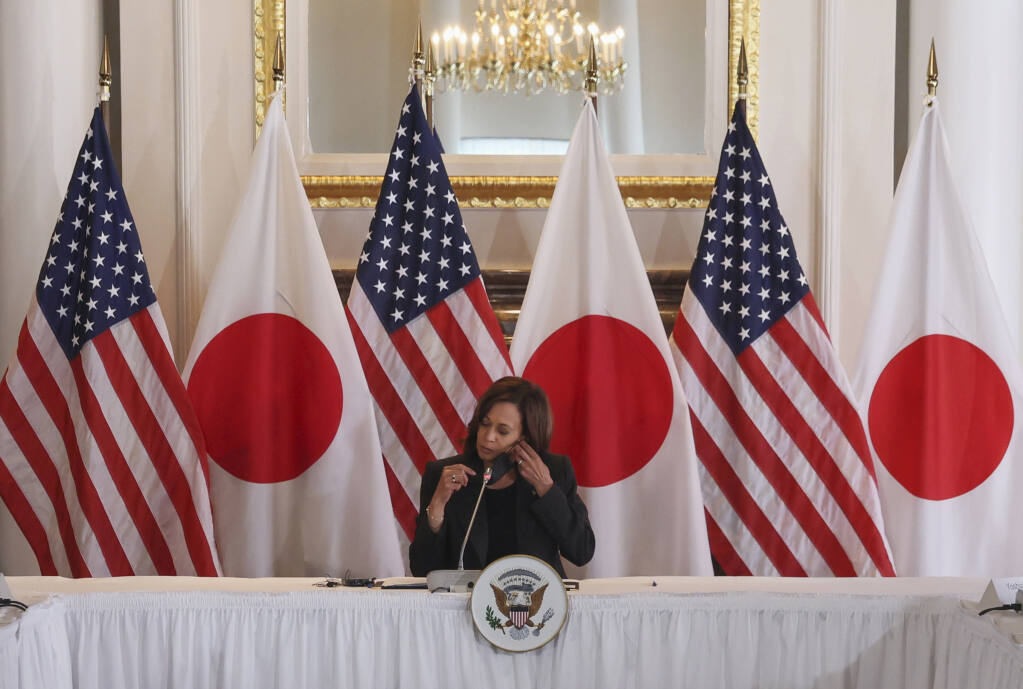 U.S. Vice President Kamala Harris holds her face mask as she hosts a roundtable discussion with Japanese business executives from companies in the semiconductor industry, at the Chief Mission Residence in Tokyo Wednesday, Sept. 28, 2022. (Leah Millis/Pool Photo via AP)

US Vice President Kamala Harris is on a trip to Japan and South Korea, her first visit to Japan and her second to Asia since taking office early last year. Ahead of the US midterm elections in November, Harris has increased her attacks on China, something she has not stopped doing since arriving in Japan on September 26 for the state funeral of assassinated former leader Shinzo Abe.

Meanwhile, a series of visits to Taiwan by senior US officials and the increased US supply of weapons to the island have heightened tension in the region. It is evident that China’s actions are only a response against US-instigated provocations.

With these statements, the US have increased propaganda and support for actions against China. There is growing Western desire to erode the “One China” principle and Japan is increasingly participating in these actions. For Beijing, it is not just a matter of military exercises, warships passing through the Taiwan Strait and arms shipments to Taiwan, but an intensification of Western propaganda to put psychological pressure on China and normalise the idea of an independent Taiwan.

The gradual erosion of the “One China” principle is evident. Most of Asia is well aware of the American falsehoods, but this is influencing its partners in the West and Japan to the idea of an independent Taiwan.

At the meeting with the Japanese Prime Minister, Kamala Harris reaffirmed the US commitment to Japan’s security, but in return, Washington wants Tokyo to be more active in containing China. Washington’s main aim is to disrupt the process of improving Sino-Japanese relations. The US is counting on Japan’s help to incite tensions with China.

It is recalled that the provocative actions against China by former US Secretary of State Mike Pompeo, who visited Taiwan for the second time this year on September 26, also failed to bring the desired results, according to Chinese Foreign Ministry spokesman Wang Wenbin. On his first trip in early March, Pompeo was awarded Taiwan’s highest award for his contributions in promoting Taiwan-US relations. To express his “deep gratitude”, the American politician described Taiwan as a “great nation” with a developed democracy.

However, his second visit was even more provocative as he announced that Taiwan “doesn’t need to declare independence because it already is an independent country.” This statement prompted the Chinese Foreign Ministry to say in a statement that Pompeo’s calculations will not materialise, describing him as “a former politician of diminished credibility who staged these stunts for personal political gains.”

Adding to insult, Pompeo said in Taiwan: “China’s aggressive conduct, diplomatically, militarily, economically … have changed this region. And it brought those who prefer peace and commerce even more closely together. If we want a free 21st century, and not the Chinese century, the century which Xi Jinping dreams of, the old paradigm of blind engagement must end.”

It has not been unnoticed that the 50th anniversary of Sino-Japanese relations, marked on September 29, has been darkened due to differences over Taiwan. Beijing is becoming increasingly wary of Tokyo as it forges closer ties with Taiwan amid growing tensions, which Harris’ visit only provokes further.

According to Japan Times, an official from a Chinese group for bilateral friendship, who was also involved in commemorative events in 2012 for the 40th anniversary of bilateral relations, pointed to the absence of momentum in celebrating the 50th anniversary. The official said that Chinese people feel betrayed by Japan over Taiwan.

When Beijing and Tokyo normalised ties in 1972, Japan said that it understood and respected the notion that Taiwan is an integral part of Chinese territory. The Global Times, the English mouthpiece of the Chinese government, said this month that Japan “tends to turn its back” on the promise it made 50 years ago.

Japan will be “able to create favourable conditions for the bilateral relations” only by keeping its promise, the Global Times also said.

However, there is little indication that Tokyo wants to deescalate tense relations with Beijing, and rather, it is more likely that things will become worse before they become better, especially following Harris’ visit to Japan and Pompeo emboldening Taiwan towards independence rather than unification with mainland China.

No. This is clear message to China. Do you want to be part of the free World or would you like to join Russia, North Korea, Iran and Syria… btw Iran is going to leave this club soon…

That dumb whore is entirely too dumb to achieve anything foreign policy wise.
The height of her career was crouching under Willie Brown’s desk and blowing him,

She is just a cheap copy of Killary Clinton, twisted sick bitch who laughs like a hyena.

Probably the next US president tho, Biden is 99% dead already.

Time for USA to destroy china…

The chinks are the enemy of ALL none-slanted eye chinks – in the long run.