The space frontier is becoming increasingly congested with space craft and orbital debris as more and more countries and corporate ventures race to secure a competitive military or commercial advantage over their rivals. However, international negotiations to develop accepted norms and requirements are hampered by rival national and corporate interests and objectives, and many activities continue to occur in a regulatory vacuum. Beyond the risk of degrading the utility and viability of the space commons more generally, two recent reports emphasize the dangers posed by the militarization of space in the absence of universally recognized norms and obligations designed to minimize the possibility of disastrous confrontations or accidents.

While the US and the Soviet Union enjoyed a virtual duopoly of space for many years, many countries now have advanced space programs, including India, Iran, North Korea, France, Japan, and Israel. Moreover, space has now become a lucrative venture for many commercial operators, further multiplying the number of spacecraft and resultant space junk occupying the militarily and commercially useful zones of space.

While commercially viable activities such as mining in space and space tourism have not yet advanced significantly, space ventures by private companies include a growing number of private firms offering satellite launch capabilities to private clients and national governments. This has helped the spread of satellite technology to countries that lack the resources to develop space programmes of their own.

The UCS Satellite Database, compiled by the Union of Concerned Scientists, shows that as of November 2018 the United States had 830 registered units in orbit. That number almost exceeds the combined total of the rest of the top ten. China follows with 280, and Russia is third with 147. LINK But the rush to get more hardware into orbit has resulted in an exponential growth in the amount of orbital debris, or space junk, which can drift for many years and is a potential hazard for other satellites. There have already been several costly collisions which have resulted in debris spreading into space.

Another potential problem is radio frequency interference. When satellites are too close to each other and are transmitting on the same frequency, communications signals can be distorted or even deliberately jammed.

Satellites owned by companies heavily outnumber those used by the military, which reflects a growing trend of the private sector becoming more involved in space technology.

To ensure long-term sustainability of outer space activities, the UN Committee on the Peaceful Uses of Outer Space (COPUOS) is drawing up best practice guidelines. While it is widely recognised that all parties involved – companies, governments and policymakers – have a duty to improve governance in space, progress remains slow in reaching agreement on how best to manage the growing use of space. LINK

Even more concerning than the generalized explosion in the number of spacecraft and debris is the militarization of space. Two recent reports note that the biggest players in space have upgraded their military abilities, including satellite-destroying weapons and technologies that disrupt spacecraft, by, for instance, blocking data collection or transmission. Destroying a single satellite would scatter a large amount of debris throughout the atmosphere. Such an explosion could hurl projectiles in the paths of other spacecraft and threaten the accessibility of space for everyone.

The two latest reports were conducted by the Secure World Foundation and the Center for Strategic and International Studies (CSIS).

In April Iran’s Islamic Revolutionary Guard Corps announced a successful launch of what it described as a military reconnaissance satellite. That satellite joined a growing list of weapons and military systems in orbit, including those from Russia (which in April tested a missile program designed to destroy satellites) and India (which launched an anti-satellite weapon in March 2019). Experts agree that China has also made substantial progress in anti-satellite technology.

The new reports use available evidence and intelligence to explore a range of weapons that various countries’ militaries are developing or testing—or already have operational. (However, a major omission is that the CSIS’s report doesn’t include the US military.) Each nation has unique abilities and characteristics. For example, India has invested heavily in space infrastructure and capabilities, while Japan’s post–World War II space activities were limited until a recent change to its constitution.

Despite the rapid expansion of military applications and spacecraft – and the array of new space weapons—relevant policies and regulatory bodies have remained stagnant. “What worries us in the international community is that there aren’t necessarily any guardrails for how people are going to start interfering with others’ space systems,” said Daniel Porras, a space security fellow at the United Nations Institute for Disarmament Research in Geneva. “There are no rules of engagement.”

Potential missile attacks on military satellites “tend to get most of the attention, but that is not all that we see happening around the world,” said Todd Harrison, director of the Aerospace Security Project at CSIS and a principal author of its report, in April.

For example, the thousands of non-military satellites that are in low-Earth orbits, below an altitude of 1,200 miles, could potentially suffer collateral damage. More than half of those satellites are from the US; many of the rest are from China and Russia. They provide key services like internet access, GPS signals, long-distance communications, and weather information. Any missile that smashes into a satellite—either as an attack or during a test—would disperse thousands of bits of debris. Any one of those pieces, still hurtling at orbital speeds, could take out another spacecraft and create yet more debris.

When China conducted an anti-satellite missile test in 2007, it created a massive cloud of space junk that drew international condemnation. India’s engineers tried to limit debris from their recent test by conducting it at a low altitude, so that Earth’s gravity would pull the pieces down and they would burn up on descent. But some pieces were flung up to the International Space Station’s orbit.

Numerous countries are now developing new military technologies for space. France, for instance, is working on laser beams that could blind another country’s satellite, preventing it from taking pictures of classified targets. North Korea is studying how to jam radio frequency signals sent to or from a satellite, and many countries are devising cyber-attacks that could interfere with satellite systems, particularly the big three space heavyweights—the U.S., Russia, and China.

The big three have also begun to master what the reports call “rendezvous and proximity operations,” which involve using satellites as surveillance devices or weapons. A satellite could manoeuvre close to a rival’s classified satellite to damage its equipment or disrupt its operations, thereby rendering it useless.

So far, there are relatively few international policies or norms about what’s allowed in modern-day space and what’s not. The Secure World Foundation report notes that an incident or misunderstanding could escalate tensions if it’s perceived as an attack.

Existing international laws offer little guidance for modern military technology in space. While these rules—including the Partial Nuclear Test Ban Treaty of 1963 and the UN’s Outer Space Treaty of 1967—prohibit weapons of mass destruction in space, they don’t explicitly limit or stipulate acceptable norms for other kinds of space weapons, tests, or military space forces.

The Secure World Foundation suggests that international organizations could create new guidelines by developing something like the Incidents at Sea agreement, which the US and the Soviet Union signed during the Cold War to maintain safe distances between ships and avoid collisions or incidents in heavy traffic. But until similar rules involving space weaponry are hammered out, he said, unexpected satellite tests will inevitably fuel speculation and paranoia, and the possibility of misunderstandings or provocative manoeuvres escalating into military confrontations is heightened. LINK

In my coutry we try to demand, that the producer also are the cleaner and a production is not proffitable and allowed unless cleaning or recyclinbg is included.

It should be so in space. Many of those satelites today are junk. Maybee UN should invest in some vukuum cleaner.

A proposal from an amateur like me could be, that every satelite by a build in explosion should be moved out of orbit and then fall down in flames.

Explosive?! I don’t think so, too many pieces going in the wrong direction. Maybe an end of life built in rocket motor. European Space Agency (ESA) working on minisat to net or even harpoon an old sat to drag it to reentry orbit. Sort of like space fishing. 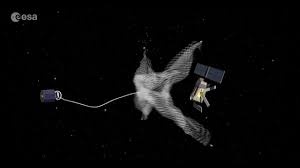 I wouldn’t worry too much. There are forces in space that can prevent men’s stupidity.

We can shoot down Iran’s satellite, the mullahs better behave.

A green space to live in. This is what I want in my life and this is my demand to the politicians.
My space should be a green sustainable clima space, and I would allow the politicians to include also higher orbit and the moon in their rules.

This article discusses the current commercial space race and how it is being fuelled by a regulatory vacuum. The author goes on to Roomba Vacuum explain that more than two dozen companies are in various stages of developing launch vehicles, all of which could be transporting astronauts into orbit within five years.