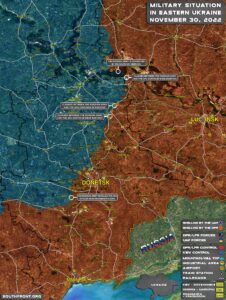 GLSDB Munitions May Have Been Already Delivered To Ukraine: Official

Same old map! I get more detail from RT and You tube.

Polen defence minister openly admits to prepare its soldiers to be send into Ukraine. This is the first step of an open invasion by a NATO country into Ukraine. Polish nazis dream to annex big parts of western Ukraine in near future under the false flag of war aid. The Ukraine has to be careful with Poland. The best thing is to stop fighting against and ask Russia for help protecting its western borders. Russia is the only party who can prohibit a polish annexation of Liwiw region.
USA has to stop its vasall Poland to go into an deep aggression against the Russian/Ukrainian world to avoid world War III. Mr Putin you are the only guy who can stop Poland. Dear poor Ukraine folk fight Polish invaders now, don’t be foolish to accept Polish patriot missile systems and soldiers. This is the first step of a hidden annexation first of your sky then of your soil!

Zelensky already plan to give some part of Ukraine land to Poland.

You know that when you first give away the little finger, you lose the whole hand.

When the shit hits the fan, Zelensky and his wife will already have made their home in Israel, living off the billions from money laundering.

Muhammed The Cocksucker
Reply to  DogFart

Oh come on! That midget faggot Zelensky has not been in Ukropizdan since February 24th.

Horrible acting even for budget soap operas. And all that horrible Chroma keying. The fucker is so greedy that he is using free interns to do CGI editing :D

Last edited 2 months ago by Muhammed The Cocksucker
8
Reply

You are right. A Polish soldier’s marching song is that Poland will take back Kyiv.

I read in a few places that Andreevka fell to the Russians today. But I didn’t see it South Front. Idk what’s going on with that.
The old South Front would be all over that. They seem to be changing their content as the war progresses.
Maybe they didn’t feel it was worth reporting.

What are some good sources/websites where I can get non mainstream news about Russia/Ukraine conflict? I can get all the western propaganda from my local media but I want to hear the other side of the conflict too and South Front is currently the only website I know about. Does anybody have any ideas?

The Crunge
Reply to  djp

Read the Bible’s new testament and the political testament of Adolf Hitler – that’s the two main counter-info streams to all that jewish bullshit from the USA as well as from Russia.

Of course I understand your frustration about the ongoing Russian military campaign in Ukraine. Russia wasted so many soldiers and material and still that little Ukraine country is resisting and doesn t wants to hand over their country to the communists. Russia even after nearly 1 year of fighting can t get into Bakhmut, and therefore now resorts to shooting missiles onto the ukrainian civilian population and civil infrastructure, hence getting themselves deeper and deeper into war-crimes, for all the world to see (same as the US always does).

But still Ukrainians remain bolt and keep on resisting and even advancing against the invaders. This of course devastates the russian conscripts morale and their mothers know very well that most of them’ll likely not come back from the meatgrinder, which Putin has put them into by sending them to Ukraine. Ukrainians know communism very well. They simple do not want to be enslaved and are thinking US support and US will give freedom to them when in fact both sides are enslaving them.

Difference is, with the russian communist occupation Ukraine has already a lot of cruelful very evil experiences, including one full-blown genecide, deportations, and all that shit. They were under russia rule long enough, it was decades over decades.

And also (as we know) USA too is enslaving them, they still chose to regardless, better try living bound to that tyrannt (USA) than to the red communist one, and they do not buy into the lies all the always red-handed bloodstained hateful Jews feed the world about Germany and Nationalsocialism. Even today Jews hate Jesus and Adolf Hitler because both revealed the truth about the Jews and their Synagoge of Satan. And thank God around the world more and more people start to wake up and realize the truth.

Even black people in America now start to wake up stimulated by Jesus God consciousness into thinking for themselves.

US church pastor & Black preacher Ray Higgins about Hitler and the jews
https://www.freespeechtube.org/v/11mz

And here another very important history lesson on that topic:

“The synagoge is worse than a whorehouse. It is the den of scoundrels and the repair of wild beast.. the temple of demons devoted to idolatrous cults…the refugee of dabauchees, and the cavern of devils. It is a criminal assembly of Jews.. a place of meeting for the assassins of Christ … a den of thieves, a dwelling of iniquity, the refugee of devils, a gulf and an abyss of perdition. I would say the same things about their souls.”

But most here in this forum still run after the atheist, antichrist communists, and their red-jewish bolshevic and cmmunist doctrines and let themselves led into hatred and bloodthirst again their christian brother who open their eyes and dare telling them the truth. So by doing this you are cursing yourselves and your souls and put spell on you yourselves eternally.

Realize it !
Putin even himself said that his Russia is the legal successor of the Soviet Union, he is an Ex-KGB-Chief, and has not forbidden sculptures of Stalin, Lenin, Trotzky etc. No. He instead praised the Soviet Union and all that shit, and he made dozens of new laws to save jews, make them richer, and fight “antisemitism” resp. free speech/speaking out the truth. Wherefore Jesus said:” Only the truth shall set you free”. So here, by example, you see Putin does the direct opposite of what Jesus told us we shall do. So it is clear that Russia under Putin is no christian country but simple another evil jewish colony – clumsily camouflaged as a christian country, to get gullible russian to go and waste their lifes in the ukrainian meatgrinder, while Putin and his jewish commissars, chabad lubavich friends and oligarchs (Abramovich, Arcady Rotenberg, Phrigozhin, Berel Lazar etc.etc.) get richer and richer from all the russian blood Putin spills and sacrifices to Judah and World Jewry ! Notice: Whoever supports Jews is an absolute enemy of God !

The Crunge
Reply to  djp

how much territory will ukraine lose to Poland?

I don’t need a crystal ball to make this prediction, the polish vultures are already making the final preparation for invasion of State 404, under the guise of NATO protection. Poland will seize the western districts, Galicia and Volhynia. The Hungarians will gobble up the south west, that scarf Orban was wearing, was pretty much a declaration to restore Greater Hungary.
The Kiev district will probably go to Belorussian administration by default.

The Crunge
Reply to  DogFart

Have we won yet?

is Zelensky still wearing the same green t shirt he put on in Feb?

Have we won yet? Is Crimea still ukraine? is ukraine still a country?