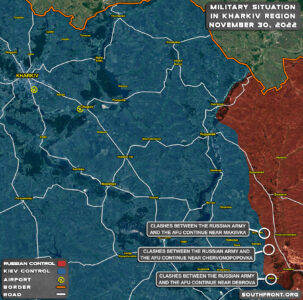 GLSDB Munitions May Have Been Already Delivered To Ukraine: Official

BREAKING: The Pentagon awards Raytheon a $1.2 billion contract for NASAMS for Ukraine

Will the kickbacks to Biden and Pelosi families be laundered through Ukraine?

I think ftx is out of the picture now

I don’t see it effective to prevent suiside drone.

You are right. There are no ultimatives in that. You should know. They are meant for something else.

Why is Russian military so poorly operating?

Look up Yourself. Its well descriebed Rustica apart from some missiles and a few dones ahas not modernized anything.

We mainly see the USSR Empire leftovers and a lot in very bad condition. That gos for the rest of Rustica as well.

The Crunge
Reply to  jens holm

Bring the Danes and some more Euro armies to Russia. Show us what you got.

Beware ! Jens will come and he’ll do a dangerous dance in front of you, and then he’ll punish you with his dick. Hahaha… ok fun aside …. It’s no question Russia has stronger military than Danmark, Belgium, or Italy etc., but if whole EU together with US would get sincerely involved into the fight, you can bet shit that this would kick ass in Ukraine really heavy. And Jewtin’s rat army would be brought to an ignominous defeat very quick. (At least as long they/NATO/USA) are not that stupid to try to occupy whole UDSSR or Neo-UDSSR (Putin’s Russia))

It is likely because the russian troops believe in the jewish-communist propaganda, which tells them it is goood to die in Ukraine for Russia ( read: to enrich Putin and his Jews
in Russia). And of course they never get to hear the truth about who’s behind all the evil coming from USA and Russia as well. Therefore I advice them to:
Read the Bible’s new testament and the political testament of Adolf Hitler – that’s the two main counter-info streams to all that jewish bullshit from the USA as well as from Russia.

Of course I understand your frustration about the ongoing Russian military campaign in Ukraine. Russia wasted so many soldiers and material and still that little Ukraine country is resisting and doesn t wants to hand over their country to the communists. Russia even after nearly 1 year of fighting can t get into Bakhmut, and therefore now resorts to shooting missiles onto the ukrainian civilian population and civil infrastructure, hence getting themselves deeper and deeper into war-crimes, for all the world to see (same as the US always does).

But still Ukrainians remain bolt and keep on resisting and even advancing against the invaders. This of course devastates the russian conscripts morale and their mothers know very well that most of them’ll likely not come back from the meatgrinder, which Putin has put them into by sending them to Ukraine. Ukrainians know communism very well. They simple do not want to be enslaved and are thinking US support and US will give freedom to them when in fact both sides are enslaving them.

Difference is, with the russian communist occupation Ukraine has already a lot of cruelful very evil experiences, including one full-blown genecide, deportations, and all that shit. They were under russia rule long enough, it was decades over decades.

And also (as we know) USA too is enslaving them, they still chose to regardless, better try living bound to that tyrannt (USA) than to the red communist one, and they do not buy into the lies all the always red-handed bloodstained hateful Jews feed the world about Germany and Nationalsocialism. Even today Jews hate Jesus and Adolf Hitler because both revealed the truth about the Jews and their Synagoge of Satan. And thank God around the world more and more people start to wake up and realize the truth.

Even black people in America now start to wake up stimulated by Jesus God consciousness into thinking for themselves.

US church pastor & Black preacher Ray Higgins about Hitler and the jews
https://www.freespeechtube.org/v/11mz

And here another very important history lesson on that topic:

“The synagoge is worse than a whorehouse. It is the den of scoundrels and the repair of wild beast.. the temple of demons devoted to idolatrous cults…the refugee of dabauchees, and the cavern of devils. It is a criminal assembly of Jews.. a place of meeting for the assassins of Christ … a den of thieves, a dwelling of iniquity, the refugee of devils, a gulf and an abyss of perdition. I would say the same things about their souls.”

But most here in this forum still run after the atheist, antichrist communists, and their red-jewish bolshevic and cmmunist doctrines and let themselves led into hatred and bloodthirst against their own christian brothers, who dared open their eyes and dare telling them the truth. So by doing this (allowing jews and communists to let you into hatred and bloodthirst) you are cursing yourselves and your souls and put spell on you yourselves eternally.

Realize it !
Putin even himself said that his Russia is the legal successor of the Soviet Union, he is an Ex-KGB-Chief, and has not forbidden sculptures of Stalin, Lenin, Trotzky etc. No. He instead praised the Soviet Union and all that shit, and he made dozens of new laws to save jews, make them richer, and fight “antisemitism” resp. free speech/speaking out the truth. Wherefore Jesus said:” Only the truth shall set you free”. So here, by example, you see Putin does the direct opposite of what Jesus told us we shall do. So it is clear that Russia under Putin is no christian country but simple another evil jewish colony – clumsily camouflaged as a christian country, to get gullible russian to go and waste their lifes in the ukrainian meatgrinder, while Putin and his jewish commissars, chabad lubavich friends and oligarchs (Abramovich, Arcady Rotenberg, Phrigozhin, Berel Lazar etc.etc.) get richer and richer from all the russian blood Putin spills and sacrifices to Judah and World Jewry ! Notice: Whoever supports Jews is an absolute enemy of God !