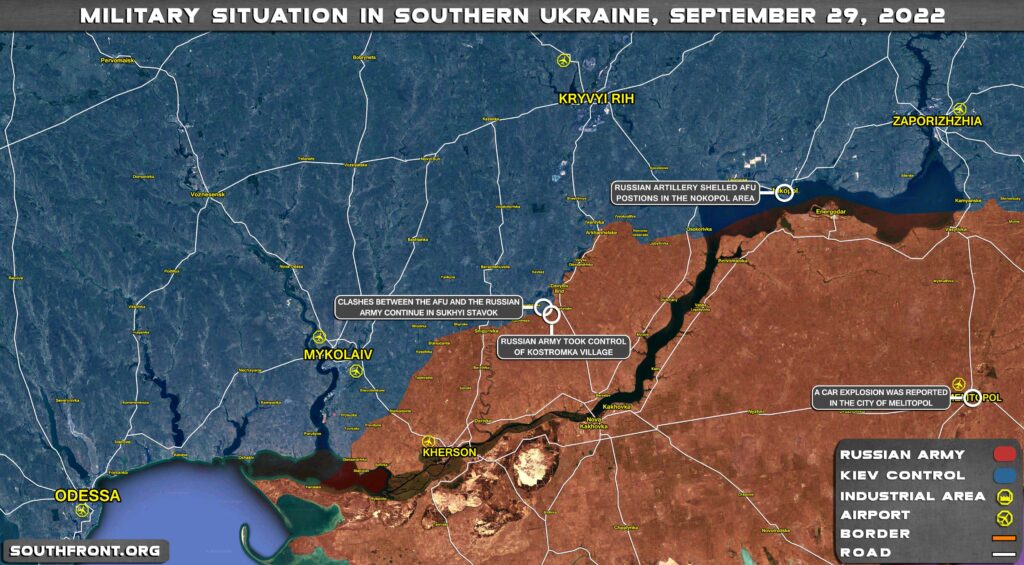 At least in the South there are good news. Uff.

Persian mosquito drones are destroying the shit out of Dnepropetrovsk. Allied Air Force will bring the city back to the 18th century. As they should. Gib Nazis keine Chance!

Hello, I am not following very closely the situation, only from time to time when something is happening. What is a good source (link) to understand what is happening? Why is Russia no longer advancing? How is this possible? The best army in Europa defeated or is this a special military strategy? Like conservation of people?

What is happening is that Kremlin delayed mobilization way too long, giving Ukros and their NATO masters 6 months to reorganize, retrain and re-arm AFU. Now RuArmy severely lacks manpower/reinforcements, especially in the North, and their newly mobilized troops need weeks, months preferably, to train and prepare properly, plus to form new and reorganize existing formations.

Instead of waging the real war, Russian leadership fought some restricted and restrained ‘special operation’ without clear objective or strategy, waiting for some fantasy diplomatic solution, slowly grinding fortified enemy strongholds and wasting missiles on random targets: one day it’s the railroad network, next day oil depots, next day television towers, next day a bridge, next day electrical grid… but never finishing the job and switching to something else. Ukr. air defense hasn’t been neutralized and now they are receiving modern nato systems, US obviously escalating from sending them old garbage to sending them the best available systems. I have no doubt they will eventually send them modern tanks, long range tactical missiles etc etc. Hopefully the mud season slows AFU in the North (Lyman will probably fall) and Russians will counter attack during the winter. But Ukros will be entrenched again and Russians have to take the same territory again. We know how difficult it was the first time. Terrible bloodbath will continue on both sides, only criminal scum from Washington win.

The worst of all, everything was easily predictable, I’ve been warning about this for months. So did many others, Igor Girkin for example. I remember back in early March I said something similar here, and even quoted the best Russian general of all time Alexander Suvorov:

“One minute decides the outcome of a battle, one hour the success of a campaign, one day the fate of empires.“

Thx Marius! Sounds reasonable. One more question. You write “But Ukros will be entrenched again and Russians have to take the same territory again. We know how difficult it was the first time.” Why does it seem the other way around in the north easier for the Ukros? Is it just the media hyping it? I mean russian forces should be super entrenched by now, but everyone is talking about Izyum and Lyman and Ukraine’s fast advances. I just don’t get the asymmetry here

Well, Ukr. had 8 years to prepare their defenses especially near Donetsk. Russian positions in the north are mostly just simple small trenches. Their new positions (after retreating from Izym a few weeks ago) are not prepared at all, only somewhat around Lyman. Also, area in the north is more forested than open steppe near Kherson so Ukr. use forests to move and hide (it will be more difficult soon when leaves fall).

As I said Russians simply don’t have nowhere near enough troops to cover entire area and AFU has significant numerical superiority in both men and equipment, they even massed a lot of artillery. Even with significant losses they are confident after their recent success at Kharkov/Izym and determinated to take Lyman before winter, and perhaps push even further to Svatove (their next objective no doubt). If that happens entire Lugansk area will be in serious danger. If Russians had reserves this would be a perfect time to counterattack Stalingrad-style and inflict AFU major defeat, perhaps enough to decide the outcome of the war. But they don’t, and Ukros know that.