According to a source in the Syrian Arab Air Force (SyAAF), Lieutenant Colonel Ali Fahd took off in the afternoon of June 18 from the T4 airbase east of Homs.

From an older video we know that the warplane is a Soviet made ground attack Su-22M4 with the serial number “3224”.

According to our source the Su-22M4 was loaded with six general purpose OFAB 250-270 bombs. Ali Fahd’s mission was to strike ISIS fighters and vehicles attempting to withdrew from Rusafah in the province of Raqqah towards Sukhnah in the province of Homs and Oqerbat in the eastern Hama countryside – near Ali Fahd’s home town of Salamyiah. Connection with Ali Fahd was lost after reaching the operation area over Rusafah.

From the other end of the story Mary Walash, a CBS producer, said that US Navy A/F-18E Super Hornet fired two missiles at the Syrian warplane. It had to fire a second missile after the first missed.

According to Walash’s story, the engagement range was below 6 miles meaning that mostly the A/F-18E used the IR guided AIM-9.

Probably it used the AIM-9X variant that was introduced on the A/F-18E of the US Navy in 2007. The US introduced the AIM-9X as an extremely advanced short range air-to-air missile designed to overtake high maneuverable Soviet and Russian warplanes from the MiG-29 and Su-27 families.

However, Ali Fahd was able to dodge the first missile and even the second exploded near Ali Fahd’s Su-22M4 –due to the Laser\IR fuze in the AIM-9X – and was not able to hit it directly according to Walash.

It’s fair to say that Lieutenant colonel Ali Fahd did everything he could in his cold war era warplane that got no radar (it’s a ground attack warplane). It’s also fair to say that the US pilot weapon chose was essential for his success as Ali Fahd’s plane is not equipped with an IR\UV Warning Sensor.

However it got a Radar Warning Sensor. If the US pilot chose to use the AIM-120 with active radar guidance, Ali Fahd would have known that he is being targeted and the F/A-18E would have lost the element of surprise.

Furthermore, losing connection with Ali Fahd allows to suggest that his communications may had been jammed right before he was downed. SF was not able to receive info if Ali Fahd preformed any airstrike against ISIS before being hit. As connection was jammed it may mean Ali Fahd’s warplane was downed even before dropping a single bomb. This supports the version provided by the Syrian government and the pro-opposition Syrian Observatory for Human Rights that said Ali Fahd’s Su-22M4 never attacked positions of the US-backed Syrian Democratic Forces (SDF).

The SDF side has released no official comments on the situation. However, SDF sources confirmed that Ali Fahd was captured by the SDF suggesting that the group will release him in the end.

Who cares if the pilot attacked SDF positions. They deserve it.

The US would deserve being nuked under you seemingly candid explanation , so when it happens don’t be surprised if Karma responds in kind by raising the US by ” hellfire ” it could happen .

There are a lot of people here in the US that are expecting just that…our just desserts. We can’t continue to run these murderous campaigns and not expect karma to come calling.

The problem is the murderous campaigns which end up create the problem they say they want to fight . AirWarz has now focused more on US/Coalition bombing since in March the US killed more civilians than the worst periods of Russia and Syria . The US/Coalition is there illegally and unwilling to acknowledge the Syrian Government as the legitimate Sovereign of Syria which the UN does though. The election system is different under the same system in the US Hilary would be the President , they hold a referendum to choose the President .

They did deserve it, and now they double deserve a helping from Iran’s medium range missiles like ISIS got days ago.

My thoughts are with Ali Fahd! Being attacked illegally while performing the legal task to defend his country against terrorists is very bitter.

Reading reports like this, which I believe, just reinforces my opinion of the
americans as the scum of the earth, and I don’t care who finds these
words not to their taste.

These words are not to my taste!

The neocons controlling the US military as a proxy for Israel do not represent all of us. Even our president hates them but has no power to stop them

First missile was fired as a warning, the second when the pilot ejected out. Maybe Ali Fahd was going to defect from the SAF.
Taken from Cold War chronicles :D

Nothing like that more like the US was trying to jam all radio communications like they did to get ISIS to Raqqa in the first place , they jammed Iraq communications back then or they would have been caught in the open with no real protection by the PMU . Seems another group of ISIS fighters left the area under SDF escort . The US just keep digging themselves that hole going to get deeper especially with the new leader of ISIS “Trump” aka “Shake All Big Daddy auld Beggar, needing allies!”

Its like a fight..you are going to punch your enemy when you receive a side one cowardly which knocks you out

This is what is called the quintessential sucker punch , just walk up to someone and smoke him from behind . This is what happens when come from a nation of cowardly people , proof is in their riots and how they treat civilized people .Just watch those videos and you see how base they really are .

Bad ass old Pilots and Fighters…Much respect for those brave Syrian pilots…Russian prbably sent 20 SU22 in replacement of the lost one..But brave and experienced pilots are to find…Hope Ali makes it back home safely.

This pilot deserved to be on a su-35.

Right on…
Altho Syria got a dozen of Mig 29..Reprots say that Russia is loading the Syrian AF with some new updated ones…

The killers are the deep state, corporate pedophile politicians , CIA , FBI that Trump is trying to get rid of ! They are like devils hiding in plain sight and there are hundreds of them in washington !! McCain, Graham and many in positions of power ! We the People hate to see these killings of innocent people in Syria !

Right. All these neo-cons made of a typ as G. W. Bush jun., the incest cowboy, Dick Cheney, a Halliburton Lobbyist and Donald Rumsfeld, a notorius liar who made the blacks Colin Powell and Condoleezza Rice their willing cat’ s paw (tool) in propaganda against Iraq. High levelled world criminals and blood sucker of their own people.

Yes, we keep saying that we detest what these people do and stand for…yet they keep being re-elected. Even granting manipulated voting, there ARE people here in the US that fully believe the complete horseshit these traitors blather on with. Also, blind loyalty does not help. If Trump was on the up and up, why the hell did he fill his cabinet with the foulest of the foul? It’s time for the American right to finally realize that Trump is just Obama in white face…the same way Obama was Bush in black face. He has flipped on every subject of any importance…his campaign was financed by the same sick fuck who backs Nuttyyahoo. Even Soros is his buddy. Call a spade a spade.

Welcome to reality, sucks, but it is what it is. Spade in spades! There is not a two party system just one for at least the last fifty years. Who would have thought those tinfoil hatted types were right the whole time.

So US Naval jets are now openly acting as air shield for retreating ISIS fighters – who are exiting Raqqa province – to protect them from SyAF attack. So that those ISIS fighters can approach the SAA conflict lines unmolested and further delay the SAA’s offensives across central east and the relief of Dier Ezzore. The US will to use everything they can to achieve their goals, in US press release over incident they stated they were protecting their ‘coalition’ partners, indeed they were, but not SDF as claimed rather ISIS. 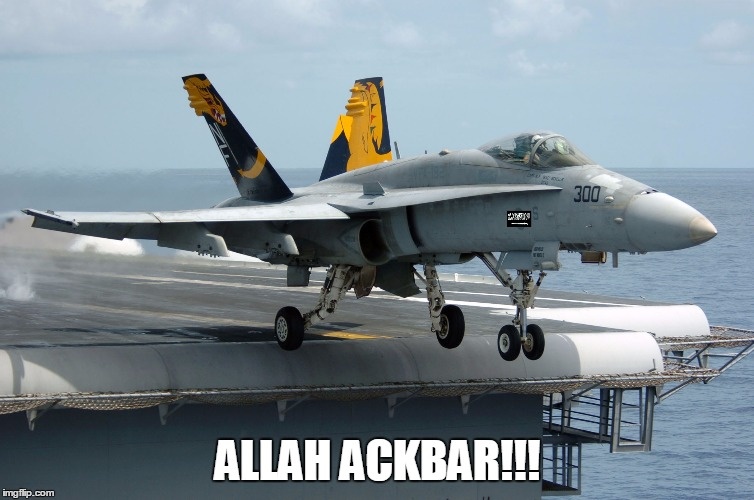 Syrian war will expand in countries around Syria especially Israel.
Israel will be warring directly against Syria.

Colonel Fahd’s cousin did me the honour of sharing it. 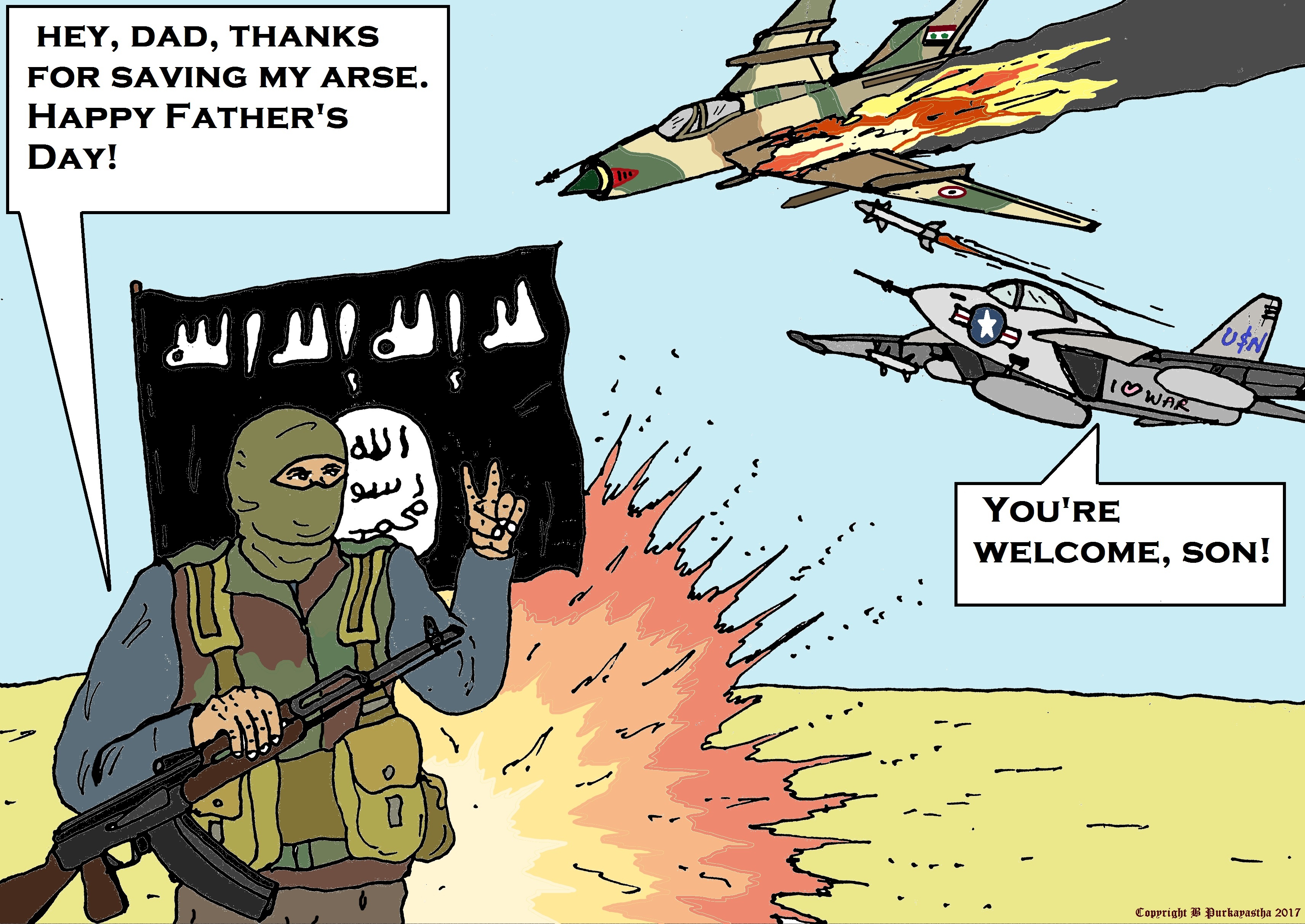 The Syrian government protected SDF from Turkey as long as there was no complain from SDF side.
The action of SDF of keeping Ali Fahd the SU-22 pilot may alow Turkey to jointly work together with Syria against SDF.

They had better release him. If not, SDF must be attacked from Iran with 30 missiles a day till he is released.
See? Now that is the art of the deal. After 1 or 2 days if being targeted by Iranian medium range missiles, the pilot will be released and wearing a brand spanking new suit to with fancy cigars.
The only thing the SDF understands is “Power through force” that is why they are so attracted to the USSA and Israel.

This Is not first lie from pro Assad “sources”.
I need some proofs to believe this narrative.

This story is wrong. No 2 Sidewinders were fired. One of the missiles was a Sidewinder and it was decoyed by a flare, the other was a (radar-guided) AMRAAM and it hit.

Things could be better if he had dodged that radar guided missile .Salute to Syrian pilot who was defending his country .