LPR territory includes the city of Sukhodolsk. It did not suffer much from artillery fire.
There is an orphanage in the city. But not for usual children. For the unusual ones.
When Zhenya offered to help them, I thought it was just an orphanage.
I was only worried about finding a store that would have enough ice cream for everyone.
Of the same flavor. Otherwise there will be trouble. They will not forgive you. As we were driving up, I saw living, beautiful children and youngsters.
They were running and milling in the area.
The little ones were running under my feet, while the youngsters were pretending to be indifferent, but their necks were stretched out by interests as if they were turtles.
Some of them walked up, and they looked up at me as if I was a space alien.
Lena instantly attracted all the girls–her waist-long hair had a magical effect. 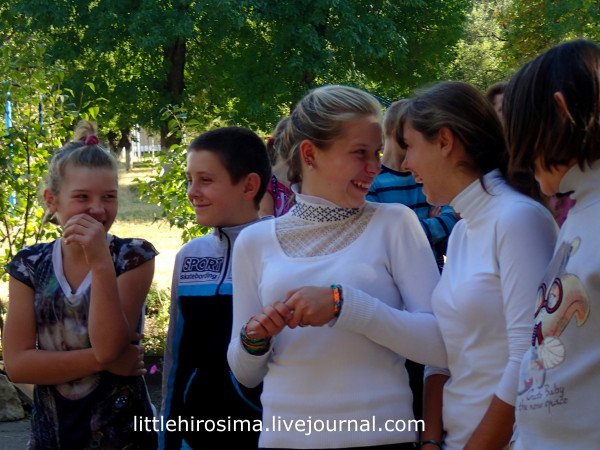 A short, aged lady walked up to me. She was the orphanage director, Anna Iosifovna.
She looked very mournful, and her commanding voice instantly sent all the older kids to help unload.
Only women are employed at the orphanage.
Therefore all the vegetables, juices, meat, cleaning supplies, were off-loaded by the orphans.
The workers were impressed by the amount of vegetables. The orphanage is surviving mainly off humanitarian aid, which means grains and canned meat. There is a problem with fresh food everywhere.
In addition to food, we brought detergent, cleaning supplies, toothpaste. They are in short supply at all the public institutions of the non-recognized republics. 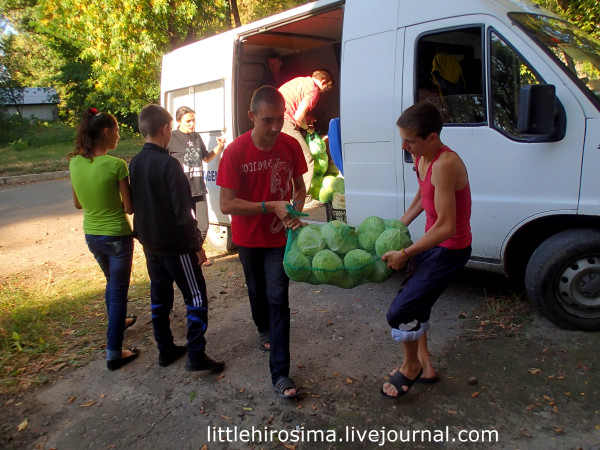 I was very impatient to make the kids happy. Distribute the ice-cream. What do they care about corn cobs, detergents, and pastes?
Besides, they were all chased out outside to pose for a mass photo. What does it matter to them that we delivered foodstuffs which will go into their soup? But the sweets–now we are talking.
Anna Iosifovna in the meantime wants to show me the orphanage.
–Let’s go, I’ll show you where our kids study, where they sleep.
–Just a second! We have ice cream, it will melt.
I barely got it out of the box and it was carried off by children’s hands and quickly disappeared. 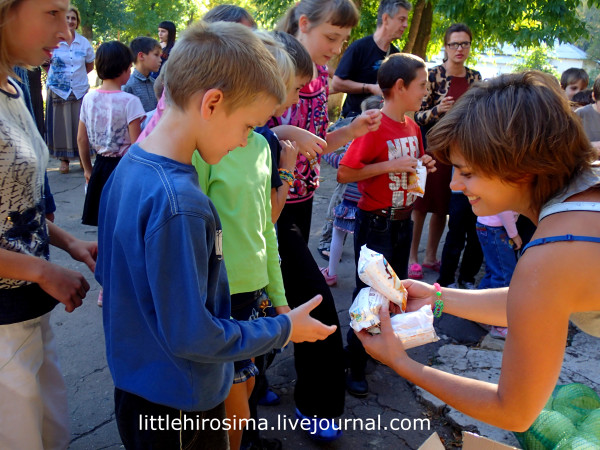 After the ice-cream distribution, everyone formed up next to the food.
Everyone froze in silent expectation, and Anna Iosifovna started to say the studied phrases of gratitude. At the right times, the children all repeated in unison: “Thank you very much.” Our saviors, our benefactors. I don’t know why, but it was hard to listen to it.
We realized this scene was repeated many times before us. Everyone stood with identical painted-on smiles. Sad and unnecessary pathos holding everyone hostage–the kids, us, and the teachers.
Zhenya grabbed the camera, called everyone, and started squealing. One should have seen him at that moment. That’s his special thing. When people are looking into the camera, he starts squealing. Heartily, and laughs at the same time. At first it confuses people, but then they quickly relax.
Then things really got underway))) Laughter rolled like a wave.
–Hello everyone! I’m Dunya!
Now everyone is laughing. For some reason my name forces kids to laugh everywhere we go.
–Oy-oy-oy-yoy! I makes me laugh too, but it’s short and simple. And easy to remember.
They are laughing harder and harder. Everybody. Teachers, kids, us.
Then Anna Iosifovna started to talk about noble Muscovites and called me a concerned student from Moscow. The pomposity got the better of me once again.
–I’m not a student but an instructor. I teach philosophy. You’ll go study too when you grow up.
Anna Iosifovna dismissively waved her hand.
–I doubt it, they’ll be lucky to finish school. 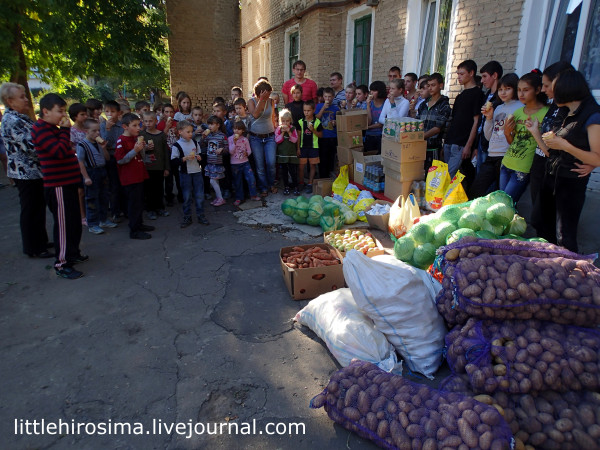 There are 75 kids at the institution. The majority of them have families, and they are here during the weekdays, the parents take them back for the weekends. Some 30 kids are orphans. All of them have developmental problems of some kind. A few people with the Down Syndrome, many autistic children, children with various forms of mental disability.
–You see, some of them appear to be perfectly normal. But it’s not so. They will never be normal. They all have deviations.
I don’t know what this woman studied and where, but I read a book by an autistic woman. She is genuinely autistic, and she wrote a very good book about what it’s like to be autistic. Or not to be normal, to be precise. And, at their own level, they understand even more than we do. They are complex people, not easy to deal with.
They ran around Anna Iosifovna, and she talked about them as if they were little animals.
I can’t judge her. She no doubt had a different attitude when she started this job 23 years ago. And if I had spent as much time with them, I would also have a different attitude. How many of them did she experience? With various illnesses and deviations.
She honestly loves her work, she knows every child. Fights to get them aid with all her might. 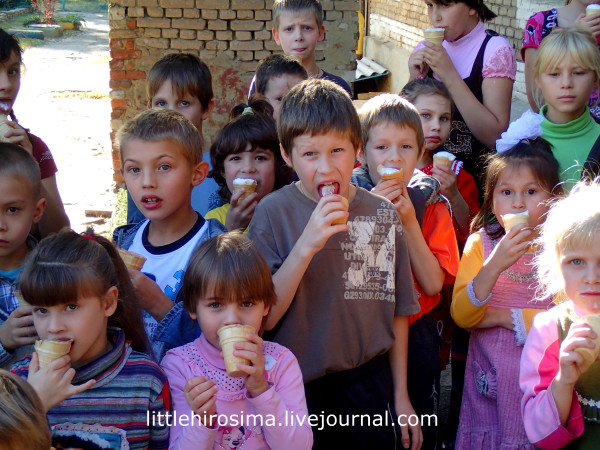 Anna Iosifovna insisted we go inside and see the institution from within. We were not interested, but her pressure forced us to enter. I did not know what to say on that unnecessary “excursion” into the building where there were no children.
She showed us their clean and comfortable rooms with precisely folded blankets and pillows.
She showed their playrooms, their speech therapy rooms.
–Where do they go afterwards?
–If they can acquire a skill, they are sent to a technical school and they become journeymen–mechanics, tailors.
–Families?
–Many of them have them, they give births. About 40% of our pupils are the children of those who have studied here.
Everything is clean and tidy. As it should be.
And the kids don’t look frightened. Which is the most important indicator.
Many of them realize there is a war going on. That people are shooting. That something bad can happen.
That they have nowhere to go.
Some of them were dropped off by the parents not because they can’t deal with them at home, or because they are trying to get rid of them, but because here they will get well fed, and the parents have neither work nor money for anything. But here they will be well fed. As we were leaving, one of the kids started to yell “Glory to Ukraine.” The teachers got embarrassed and started to shush him.
–Forgive him, he’s little, he doesn’t understand.
They were apologizing for him. Which was odd. He is just a kid. 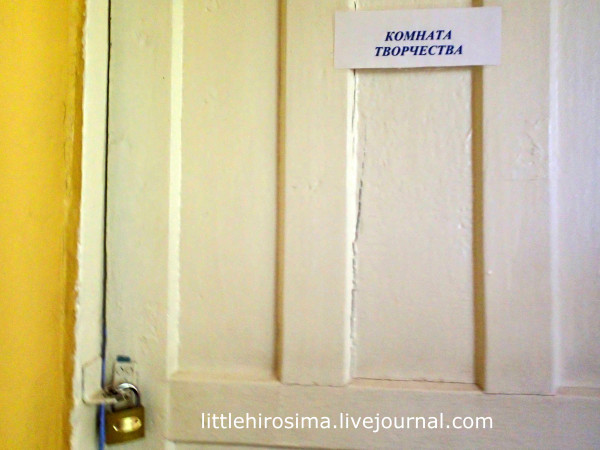 If you want contribute to humanitarian assistance to the people of the Donbass, contact me in person through my livejournal account, through Facebook, PayPal, or via email: littlehirosima@gmail.com. Everything will be delivered and reported.