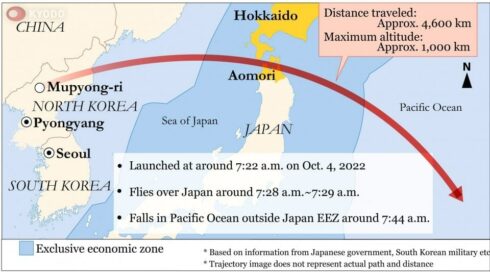 On the morning of October 4, North Korea reportedly launched a ballistic missile towards the Sea of Japan. The Japanese government warned residents in some remote islands that are part of Tokyo as well as Hokkaido and Aomori prefectures to take shelter.

According to Tokyo’s Ministry of Defense, the missile flew over Japan’s northern territory. It reportedly fell into the Pacific Ocean outside the exclusive economic zone of the state, about 3 thousand kilometers from the islands of the Japanese archipelago. The Japanese claims were supported by South Korea. According to South Korea’s Joint Chiefs of Staff, North Korea’s intermediate-range ballistic missile flew ~4,500km with an apogee of ~970km, reaching a speed of Mach 17 before splashing in the Pacific ocean, some 2800 nautical miles east of Korea, having traveled above Japan. The JSC added that South Korea and US intelligence authorities are still analyzing more details. The DPRK reportedly launched an unidentified ballistic missile from Mupyong-ri.

Pyongyang is yet to react to the claims from Tokyo and Seoul.

Meanwhile, Seoul and Washington have carried out joint war games, and US Vice President Kamala Harris traveled to the North Korean border. Last week, Harris traveled to the demilitarized zone and denounced Supreme Leader Kim Jong-un’s government. She attacked Pyongyang, dubbing the government as a “brutal dictatorship.” She went on to demand the full denuclearization of the Korean Peninsula, provocatively committing to defending South Korea with the “full range of US defense capabilities.”

North Korea needs to send one of these missiles towards Chile and land 200-300 miles off the coast. This will tell the world “Hey bozos (slang for ‘clowns’) I have nukes and missiles to deliver them.”
Then they announce you have an EMP bomb and can turn out the lights anywhere.

N.Korea doesn’t want to be seen as the one that is provoking, the whole reason “they” build a nuclear weapon was to hold the US back from invading their country.

Vlad from Romania
Reply to  JJ345

US is invading Russia so even nukes are not enough to stop them nowadays.

maharaja
Reply to  Is this real?

They do not need to, these test are not about where it lands it has trajectory. The range is taken from this and the height of the missile shows they can fire missiles out 12,000 plus KM. They are more likely testing the reliability and other aspects not the range. That is certified already. All nukes have an emp effect for the most part, the spread is based on height of detonation. In addition almost all military of the world are well protected from effects of an EMP. Its more of a movie thing than a actual weapon. True your smart washer or fridge might have some issues but the fact the temps increase by some 5400 degrees would be a far more pressing issue.

If it did not fly to Washinton, DC, it was a failure.

Bravo NK! The bravest little country in the world!

Kim just doesn’t give a fuck about USA Empire and its slaves.