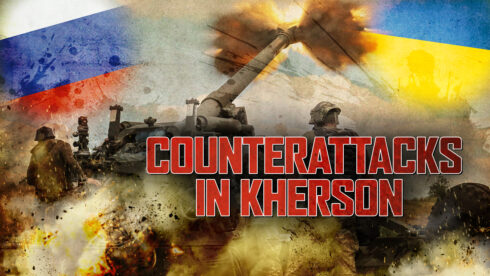 At the end of August, the AFU launched a major offensive in the Kherson and Krivoy Rog regions. The main area of the strike was the Andreevka area, where the AFU tried to cross the Ingulets River and reach the town of Berislav located on the banks of the Dnieper River.

In the first days of the offensive, Ukrainian forces managed to advance to the village of Sukhoi Stavok, where their advance almost stopped. Ukrainian units found themselves in the steppe, heavily shelled by Russian artillery and aircraft. As a result of the operation, the AFU lost thousands of servicemen. The Ukrainian breakthrough to Berislav ended in complete failure. 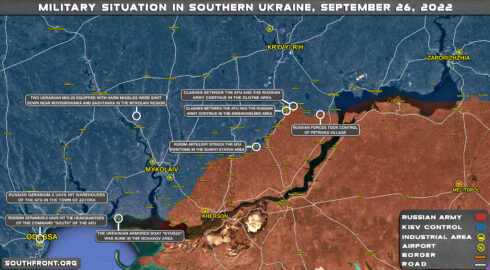 So far, no significant changes on the front lines have been reported by neither of the warring sides. Clashes continue in the same corridor from Andreevka to Sukhoi Stavok. The AFU attempt to hold their positions in the area, storming the smaller villages without any significant successes. In turn, the Russian military are shelling the Ukrainian positions with FAB bombs, inflicting heavy losses to the enemy.

On September 27, the Ukrainian units who survived reportedly urgently left their positions in all settlements, except Andreevka. Only some artillery gunners remained in Belogorka. Retreating Ukrainian forces left their dead comrades and destroyed military equipment on the battlefield.

Among the destroyed equipment, there are the British armored vehicle Husky TSV, the Dutch armored personnel carrier YPR-765 and the Slovenian BMP M-80A.

The first destroyed International M1224 MaxxPro MRAP supplied to the Kiev regime by the USA was spotted in the Kherson region. In total, in summer, more than 40 vehicles were transferred to Ukraine,some of them were seen in the Kharkiv region.

In addition, on September 27, the Russian Aerospace Forces reportedly shot down two Ukrainian MiG-29s in the areas of the settlement of Osokorovka and Rozovka in the Kherson region.

Currently, the AFU command is regrouping forces in the region. The Ukrainian military plan to resume the offensive on Blagodatnoye. Two companies from the reserve arrived in Bereznegovatoye. They are planned to be deployed in Sukhoi Stavok, where they will serve as cannon fodder.

Why America Aims to Deindustrialize Europe

My mouth isn’t big enough for a horse’s c0ck ☹️

You should practice more, joe9211 swallows 9211 horse cocks every day….

Let’s give it a try, take one for the team.

Balls or no balls?

Hey Jens, you totally have my respect. You take the opposite side every argument and you keep showing up to play. You are one hell of a “good sport”. Sorry to hear about your mouth.

October will be the month of victory for the Allied Forces.

US and UK have been killing and genocide 6 million of innocent peoples in the Middle East.

Even the Honduras military is better than russian military.

Slava Russiya. We will overcome the Nazis and defeat the Evil West.

Only Nazi is in your own mindset.

no, they are everywhere, maybe you are one of those losers

I eat Gestapos for breakfast

“US President Joe Biden must answer the question of whether the United States carried out its threat on September 25 and 26 when an emergency was reported at three lines of Nord Stream 1 and Nord Stream 2, which has been preliminarily recognized as ruptures, whereas he suggested those were blown up,” the Russian diplomat said on her Telegram channel. On it, she posted a video in which the US leader delivers the speech in question.

“His statement of intent was backed up with a promise. One must be responsible for one’s words. Failure to understand what one says does not absolve anyone of responsibility.” Zakharova emphasized. In my opinion, Biden committed a war crime. So he must be held accountable for this crime and brought to justice.

another britshit pedophile, go and suck the worms from your beloved dead queen.

Those thoughts inside your head …. they’re dreams. Now hit your thumb with a hammer … that’s reality. Learn the difference.

Ukros continue with these suicidal attacks on Kherson direction to keep Russians busy and prevent them to transfer more troops to the north.

Vlad from Romania
Reply to  ...

Is it not a way too high price to pay?!

ZZZ
Reply to  Vlad from Romania

For US UkrainianLivesdon’t matter. Perhaps even Nato soldiers’

“The results of the plebiscites speak for themselves: the people of the Donbas, Kherson and Zaporizhzhia regions do not want to go back to their old lives and have made a conscious and free choice in favour of Russia,” the MID said in a statement.

“Sanktionen gegen die USA!” (Sanctions against the US!) trending on German-speaking Twitter today.

That nato equipment is being destroyed is good news. The dead bodies of Ukraine military personnel scattered around should be a warning to anyone Ukrainian and foreign mercenaries alike that they are being used by the globalists as cannon fodder. Go home to your family’s

Vlad from Romania
Reply to  Bobo

They have no families. They are pauper . They are hopeless. Russia is making them a favor to end their sufferings.

passerby
Reply to  Vlad from Romania

Thank you for Yr comment, it answers one of my questions. Those trolls use words randomly, they know nothing of Tolkien work. Their owners know it, from that the use of such words, but don’t understood Tolkien ends. So they are stupid like their trolls.

Only in your imagination dude, only there. So far the so called counter-offensive was catastrophic for the Ukies. They lost almost all their hardware and thousands of men. The referendums are over and the people have chosen to reunite with Russia. Suck on that you halfwit. Now Ukies are really screwed. Next attack on Donbass will be an attack on Russia and that won’t end well for Zelensky. Let’s see if he has the balls to end his pathetic existence. No one will save him now. Ukraine is history now. West won’t get anything from their land-lease. That will drive them crazy. So much money wasted and lost. But what can one expect from utter morons.

What are total fatal casualties among the military personnel of the failed Ukrainian CIA project since the last week of August?

Russian military incompetence and poorly trained troops have made it possible for Ukies to continue the war.

No, $40 billion US, and amounts like the $1 billiion from lick-spittle Canada, along with advisers, training and intelligence support made it possible for the failed Ukrainian CIA project to prolong their agony.

The globalists are wasting human lives and money like during WW2.This time in vain. They will lose

What was the price of total capitulation and subjugation for Nazi Germany? Given that they were completely defeated and ended up with their sworn enemy, the Reds, squatting on half the country and the rest, and later all, owned outright by the Amis?

Brainless and clueless gay moron go to hell and ask Carolus Rex, Frederick the Great, Napoleon, Ottoman sultans and Hitler instead of quoting some jewish crap you found on your ukro boyfriend twitter.

Definitely, cannon fodder. All this horseshit about great gains will be at a greater gain for Russia in shear destruction of Nato and Ukronazis military disintegration. These aircraft that keep popping up are older left over from Warsaw Pack.
However nothing will be off the table considering US, NATO destruction of Russians pipelines. Showing humanity and those skeptics their true terrorist mentality. Lol 😆 have you seen propaganda news and pictures of long lines Russians at all the borders. More lies when it’s only conscription. I can only imagine what it would look like here in Canada, if Trudeau tried to send Canadians to the new Eastern front, as Cannon fodder? That right the Pedo? WEF, freak would find out really fast Western Canada would want that Jackasses head hanging from a poll.
I think Quebec prefer to give worse.

I got monkeypox from Lloyd Austin III. What should I do now?

There are other two Lloyd? I hope they are long dead. Otherwise it is a tragedy

We will see where the Chechens are deployed next? I’m guessing right at the heart of next big city liberated. The Black Sea will be target for US ships if another one enters it again. Turkey, even if they were to now stay in Nato, won’t want a Naval War going on around them. With hypersonics, how fast before the US and Nato start using the Nuclear option. One Kinsil Dagger will take out a Nuclear Aircraft Carrier and all it’s 5000 personal and 125 minimum Aircraft.
China has answer also for these obsolete worthless boat anchors.
The F35 will not do, as well, as older F15, F16, F18 Hornets. Any hit of F35 done. Isreal and Nato have majority of these. Drones will be where a of warfare will revolve around and seems Bricks and SCO have a good competitive. handle on that too.

It would be a joy to behold to witness a US carrier group being sent to the depths of a cruel sea.

I am heading to the coast of NYC on stealth mode

ZZZ
Reply to  K-19 the widowmaker

I hope you don’t destroy NYC. It will be make US a big favor

Ok, for now we know that the pipeline was destroyed/killed by the US military. A good retaliation ‘in kind’ would be to destroy/kill US satellites.

Pepe on RT: This is the lats week of velvet gloves, the last week of “special operation”. Next week the war will begin.