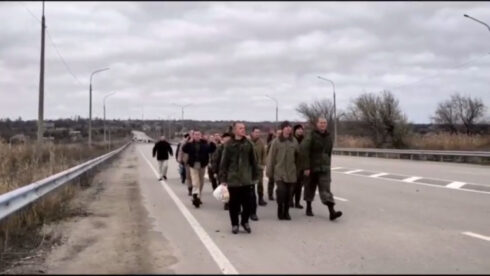 The intensity of prisoner exchanges have recently increased between the warring sides in Ukraine. Three prisoner swaps between Russia and Ukraine were officially confirmed last week alone.

The last prisoner exchange took place on November 25 in the Zaporozhie region. The Russian Ministry of Defence confirmed the swap on November 26 and claimed that “as a result of the negotiation process, nine Russian servicemen who were in mortal danger in captivity were returned from the territory controlled by the Kiev regime.”

Head of the Donetsk People’s Republic Denis Pushilin claimed that the released POWs included a servicemen of the DPR.

Six of the released Russian POWs were captured when they were securing the retreat of Russian forces from Krasny Liman. During the operation, they were injured, surrounded by Ukrainian troops and their ammunition ran out.

In his turn, the head of the office of the President of Ukraine, Andriy Ermak, claimed that Kiev got back nine servicemen and three civilians. Among the servicemen are four Navy soldiers, two National guardsmen and border guards, including two officers and seven soldiers. The Ukrainian POWs were captured in Mariupol, at the Chernobyl nuclear power plant and on the Zmeiny Island.

The civilians who came back to Ukraine include two women and a man who was considered missing.

On November 23, the Russian Defense Ministry claimed that 35 Russian servicemen had returned from Ukrainian captivity. In his turn, Yermak said that Kiev had returned 36 people, including 35 servicemen and one civilian. On November 24, Kiev and Moscow exchanged by 50 servicemen.

Since the beginning of the Russian special military operation in Ukraine, the warring sides have repeatedly reported on the exchange of POWs. In his speech at the G20 summit, Ukrainian President Vladimir Zelensky called for an exchange of all prisoners with Russia. Since then, the negotiation process on the POWs exchanges has significantly increased.

North Koreans won against the US back in the 50ies

So there goes “denazification”? 🤣

Does it look to you like the Russians have terminated the ATO? I mean, what with the destruction of the capacity of the Ukrainian state to defend the infrastructure required to conduct the kooky Joint Forces Operation ethnic cleansing program. And what have you.

What happens to those released?

Prison camp in Siberia for cowardice in battle and by allowing oneself to be captured, or returning to the front line.

The women were used up and returned.

Isn’t that pretty much the normal status for women who flee the failed Ukraine CIA project?

Prisoner exchanges are good. Hopefully the parties to the conflict will continue to regard the issue of prisoner exchange (and conditions under which prisoners are taken and kept) in a civilized manner. When it is seen that both sides are doing so, factually, it may be a sign that further progress is possible.

Wouldn’t it be better for Russia to retreat and surrender all of Ukrainian territory than lose tens of thousands more mens lives?

Thank you to the admin at Southfront for getting the comments section cleaned up. Debate and discourse are always great but debasement and depravity should be left to those with minds like children. Keep up the good work. Kiev by Christmas and Peace by New Years. Onward to the final victory, Z. ‘
BTW While I am praising, a big shout out to Russia for banning propaganda from perversions and abominations. Freedom, faith and family. Russia has two out of three going strong. I suspect if Russia wasn’t being constantly attacked by the zionist West it would readily permit more domestic freedom.

Oh FUCK, really you send kids from 18-20 years old, send special force units, not kids for God’s sake, what Putin does do with such young and inexperienced kids. Jesus.