Ansar Allah Are Unrelenting In Their Push For Ma’rib

Russian special ops should abandon Western like approach where they see themselves as heroes of some bad Pedowood Rambo style movies and as personifications of admiration and stardom.
They should go to good old USSR Spetsnaz tradition of being fucking dangerous and above all anonymous and secretive in everything they do.
They should leave filming of the spots like this to the Russian actors – because this is just for the show anyways.

1. GRU Spetsnaz:
Born in 1950, special units of the Main Intelligence Directorate (GRU) are the “eyes and ears” of the Russian Army’s General Staff.

Not coincidentally, their emblem depicts a bat against a backdrop of a globe, not unlike that of a certain caped crusader. Like this animal, GRU Spetsnaz covertly and quietly operates in the dead of night around the whole world.

The night before Warsaw Pact forces entered Prague on 21 August 1968 and ended the Prague Spring, Spetsnaz GRU fighters effortlessly took control of all the main administrative buildings of the Czech capital.

Spetsnaz GRU undertook missions in Angola, Beirut, Vietnam, Afghanistan and Cambodia, where they even managed to steal a brand-new AH-1 Cobra helicopter from an American base.

2. FSB Spetsnaz:
When at the 1972 Munich Olympics Palestinian terrorists attacked and killed members of the Israeli team, the Soviet leadership was determined never to let anything of the sort happen in the Soviet Union. Two years later, the Alpha Group counter-terrorism task force of the KGB was established. Moscow was preparing to host the 1980 Summer Olympics, and Alpha was charged with guaranteeing security.

Alpha Group’s most famous operations include the assault (along with Spetsnaz GRU) of the Tajbeg Palace in Afghanistan and the assassination of Afghan President Hafizullah Amin in 1979. During the Chechen Wars, the task group attempted to liberate a hospital in Budyonnovsk, seized by the terrorists. However, the assault was thwarted, and the militants managed to escape.

In 2002 FSB’s Alpha and its comrade Vympel (established in 1981) assaulted the Dubrovka Theater in Moscow after it was seized by terrorists. As a result of the operation, 750 hostages were liberated, while 36 militants were killed. Unfortunately, 130 hostages died during the assault and afterwards in the hospital.

3. Airborne Troops special forces:
Unlike their colleagues from Spetsnaz GRU, airborne special forces do not operate worldwide. Their main task is to prepare a foothold in the enemy rear for the mass landing of the Airborne Troops and they usually operate at a distance of no more than 2,000 km from their forces.

The Airborne Troops special task force today is the 45th Guards Independent Reconnaissance Brigade (until 2015, regiment). During the First Chechen War, the regiment’s soldiers participated in the assault of Grozny.

Chechen militants were shocked by the Spetsnaz forces’ “silent” method of work: they quietly occupied building after building, leaving them for the motorized infantry that followed. Whole Chechen units disappeared without a trace.

4. Navy Spetsnaz:
The first Soviet frogmen appeared during the siege of Leningrad in 1941 to protect the city and the Baltic Fleet. There, they clashed with torpedo boats from the Italian 12th Assault Vessel Squadron, which targeted the Soviet warships, as well as the city’s bridges, communications posts, and infrastructure. As a result, Soviet specialists prevented Leningrad from being blown up.

Nowadays, units of the Russian Underwater Diversionary Forces and Facilities (PDSS), as the Navy Spetsnaz is called, are based with each Russian Fleet and fill their ranks with the best-of-the-best Marines.

The mission of such units is to ensure the security of naval facilities and warships. In the event of war, the PDSS undertakes saboteur missions in enemy waters.

Information on SOF personnel and operations is classified. It is known that its fighters took part in operations in Crimea (2014), Syria and clashes with Somali pirates.

The RuAF have Spetsnaz units as the USAF Combat Controllers and PJ????

rotten comrades..your superiors are not sentiments so keep your bs away from us.. 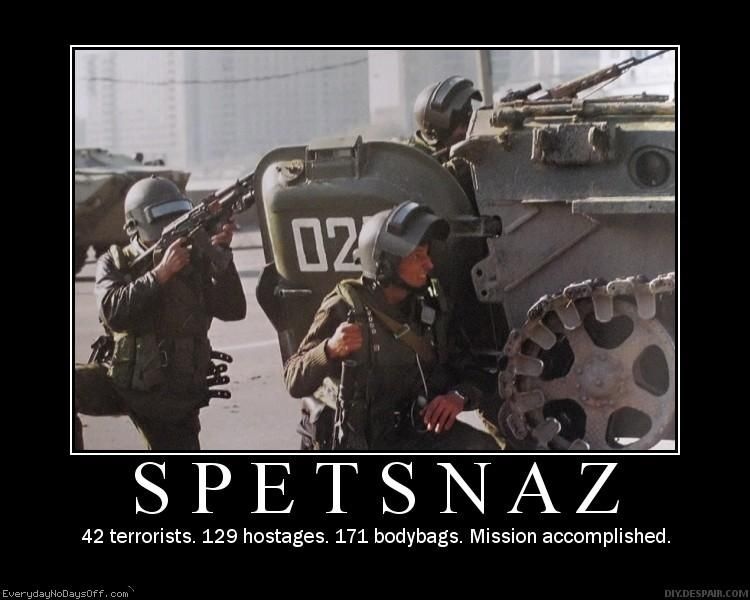 To be honest Turkish specs ops faced similar situations with turds oftentimes with similar results.
France…Bataclan.
U.S. Waco, 9/11…
Aside from that Chechens are amongst the best fighters on the planet.
Thankfully they are part of Russia now loyal to the Motherland.
Its no coincidence that most the Spetznaz troops in Syria are actually ethnic Chechens.

bro ı am holding back when ı see you..Aside from that Chechens are amongst the best fighters on the planet.chechens are simply the best…hands down…ethnic russians are joke…us waco is 51-day standoff tragedy…it has nothing to do with spec ops..

Thank bro, same here :)
It was raided by FBI spec ops (Hostage Rescue Team)…
Russians are pretty good too, I wouldnt underestimate them.
The most overrated spec ops on the pkanet are probably U.S. Seals.
Probably Turkish police force could beat them on a rainy sunday.
Green Berets and Delta are a different story tho.
They are pretty good albeit not the best.

Welcome in the club :)
Does Turkey consider Hungary as distant relatives because of Atilla and Turkic origin?
Im only curious :)

your insecurity is typical for turkeys—u lost all wars vs Russia , except 2 when u were allied w UK
LOL

your pitiful stupidity and insecurity again expressed—your lies do not deserve to be refuted …u humiliate yourself….I suspect an insecure snowflake cartoon must block to protect herself from the truth—da Chu Chu krasotka

there is nothing lie boi..all facts but you cant prove the contrary..ı am talking about spec-ops you are talking about history..ı am giving russian uav companys link about russian uavs are newborn baby you are answering me syria-libya etc…shortly you earned a one-way ticket to gulag ..you are blocked to the hell…enough with your legendary stupidity..clod..

At Beslan those savages started murdering Hostages so they had to go in hard,i believe it was the guys from Alpha who led the way.

I still remember a Spetznaz guy with a girl in his arms, saving her.
The armor plate of the guy was penetrated at least 3 different places and blood was pouring out of the holes yet he still kept going.
He survived his wounds, a living Hero.
God Bless Him.