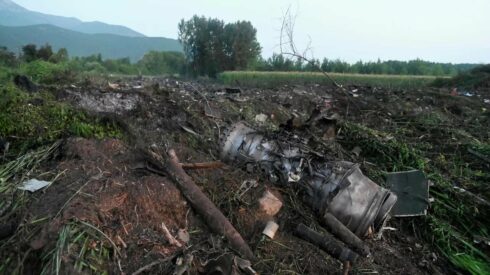 On the night of July 16, a Ukrainian An-12BK transport plane crashed in Greece. The plane fell 16 km west of Kaval airport, which is located in Greece. The plane was designed to transport cargo. The aircraft was on a Nis-Amman flight, flying from Serbia to Jordan. It was supposed to make two stops for technical reasons in Riyadh and Ahmedabad. Eventually, the plane was supposed to fly to Bangladesh.

When the aircraft entered the airspace of Greece, one of its engines caught fire. The plane’s crew made the decision to land in Kavala for an emergency landing. The plane has since disappeared from the air traffic control radar and went down near Mt. Pangei. The plane’s crash was recorded at 7:47 p.m. local time. Locals in the area confirmed the crash.

There was a crew of eight Ukrainians on the plane, none of whom survived. This information was later confirmed by the general director of the Meridian airline, to which the plane belonged.

The airplane was flying for over 50 years, and the cumulative flight time was equal to 40000 hours. It is worth mentioning that the plane wa by Meridian Air Cargo since 2022. Before this flight, the airplane made several flights in the Balkans, also flew between Sarajevo, Paris, Belgrade, and Ankara. After Ankara, it flew that ill-fated flight MEM3032 from Nis.

After the plane crash and a series of rescue efforts, residents and eyewitnesses reported a rather strange white plaque on the wings of the plane. The white plaque represented a hazardous chemical substance. The entire load totaled 11.5 tons. Locals were told to lock their windows and doors and to turn off their air conditioners. The Greeks also set up a special team to investigate the incident. Greek media wrote that white powder was found at the crash site, but rescue services said Sunday evening that they found no hazardous substances.

«We are talking about heavy smoke and heat and a white substance that we cannot yet identify, so the SWAT team has to let us know what it is and if we can get to the scene» – said Northern Greece Fire Brigade Lieutenant General Marios Apostolidis.

Two firefighters have been hospitalized due to lung problems. The Greek Foreign Ministry is very unhappy about the incident and is already preparing to sue Serbia for lack of information about the hazardous chemicals. Serbian Defense Minister Nebojsa Stefanovic said the shipment was privately owned by Valir, and transported training ammunition for the army of Bangladesh. The shipment just flew out now, but the contract was signed back in 2011. The buyer was officially the Ministry of Defense of Bangladesh.

The shipment is owned by a small company with an even larger company owned by Slobodan Tesic, an arms dealer. Tešić has been under U.S. sanctions for years. He works with different clients from different countries, so it is not surprising that the package was sent to Bangladesh.

However, there are now all sorts of versions. One of the simplest versions is the transportation of phosphorus ammunition or chemically hazardous substances for deliveries to Syria, and the more confusing ones are arms deliveries to the AFU (Armed Forces of Ukraine) by Serbia.

There are several unclear points in the story at once. Why and because of what the Greek firefighters were hospitalized and whether there is a connection between the AFU and the Ukrainian crew, what substances were on the plane and why the rescue services said there were no chemicals, and where are all 8 bodies of the dead crew.

The chemical weapons could be used to kill civilians in a not NATO country, so it was correct that it was shot down.

but who shot it down or made it burn? who wanted to prevent this? and how did they know?

The ones (the good guys) who shot it down obviously had good intel working for them.

Just like the Georgia guidestones, in no time out of the MSM. Look there, not here.

Nothing to see here. It didn’t even happen. Unknown white powder, it definitely isn’t black k market drugs controlled by the CIA.

I think you are having a major stroke, that’s not how English works ol’ Jensi 🤪

I’ll go with the Arms and Cocaine theory !!

What’s wrong with making things up?

its called conjecture and worth looking at

that was a conjecture!

Most Serbian people are pro-Russian. However, NATO had installed a puppet regime in Serbia after they ousted Milosevic through an uprising that was also orchestrated and fomented by the CIA and Western intelligence. That pro-NATO government has been ousted and voted out of office. Unfortunately, there are a minority of Serbs who are pro-Western. And, many of them work in organized crime and as shady businessmen and arms dealers. The current Serbian Minister of Defense, Nebojsa Stefanovic, is much friendlier with NATO than his predecessor. The Serbian government has been walking a tightrope between the West and Russia. And, they may have appointed Stefanovic to Minister of Defense in response to Western pressure to replace the former Minister of Defense, Vulin, who was staunchly pro Russian. So, it is possible the Ukrainian plane was carrying an arms shipment bound for Ukraine and that the current Serbian Minister of Defense was aware of this. Many people in Serbia and the Serbian military have been calling for his replacement as they don’t trust him and see him as a Western agent.

You are an idiot.

the serbs are in a very unenviable position

And he bought his bull shit fake education degree from a on line school. Look it up

Western pressure is like a pimple on its own face. It keeps picking and squeezing it trying to save face and ends up with a horrible eyesore. Such is the nature of undeserved hubris.

just because Serbian people like Russians that does not mean there was nothing nefarious on the plane.

There are no secrets. Stop with conspiracy theories. You don’t like the simple truth, it is too boring. Lets make some things up, to damage Serbia…

Then why all that silence about the plane in all the media controlled by Vučić? RTS, Novosti, B92, tabloids, you name it. And why was the crew asking to return to Niš, instead of landing on the closest airport, that would have given them a better chance to survive? And let’s inform the people that might have not known about the Russian-Serbian Humanitarian Center in Niš. Which I hope was the reason for this thing to crush.

it was for Ukraine. If this load was for Bangladesh, how come Bangldesh is so quiet.???

Slobodan Tešić is a friend of our president Aleksandar Vuchić. So he is involved too. Probably weapons were not for Bangladesh, but for rebellion troops in Syria that are supported by Jordan and S. Arabia. That means those weapons were planed to be used against Assad and Syrian Arab army.

Bangladesh government agreed , it was carrying ammunition for Bangladesh. no secret anymore

You see people that what happens when a big plane crash, not what the fuk yanquis told their rtded people.

Was this one of the transport aircraft leased out by the Ukrainian government to be able to afford more TB2 from Turkey?

I thought that Serbia was an ally and freind of Russia.

The people – yes. But the ones in power are sneaky bastards

hopefully the serbs will explain themselves

Minister of defense of Serbia is a cia plant
en.wikipedia.org/wiki/Megatrend_University

this plane was carrying was 120 mm Morter shall for Bangladesh Army Bangladesh Border Guard forces.. before same company twice gave delivery to Bangladesh. it was last lot.
this is confirm by Bangladesh Government Foreign Service.

why so funny comments and thought about the this plan accident.

Cocaine In America (CIA) are a drugs cartel and Russia should disrupt it’s business.

Probably a heroin shipment from Kosovo to supply Zelensky and what’s left over for his cannon fodder. He’s moved on from simple cokamania to smackacopium. Times are tough.