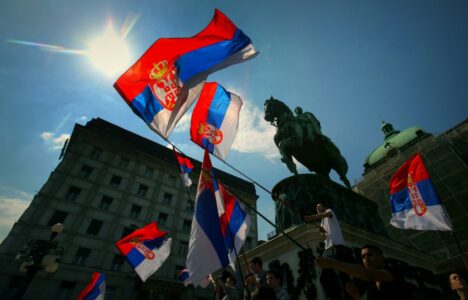 Considering that the majority of Serbs don’t want to become part of the EU anyway, all they themselves could say is good riddance.

The European Union is adamant that it is a “union of equals” and that the “interests and concerns of all of its current and/or prospective members will be taken into consideration”. Within the EU legal system, this is also made crystal clear by Article 4(2) TEU which states that “the Union shall respect the equality of Member States before the Treaties”. Still, the reality is starkly different. On paper, every member state is equally important. However, nobody truly believes that countries like Luxembourg or Malta could ever be as important and powerful as Germany or France. Worse yet, even France has trouble matching German dominance in the EU, to say nothing of other member states, particularly those in Southern and Eastern Europe.

As then there’s Southeast Europe. Current and prospective EU members there are as overlooked and dismissed as they could possibly be. Greece, by far the most important and powerful member in Southeast Europe is held in perpetual debt enslavement, while Bulgaria and Romania are virtually without sovereignty. And last, the so-called “Western Balkans” or former Yugoslavia (and Albania). This region’s EU perspective is questionable, at best. However, not so much thanks to the region itself. It is the bureaucratic empire that has treated the region as an outright colony, the one it created by destroying the relatively prosperous (and sovereign) Yugoslavia, instead creating half a dozen neo-colonies with little in terms of actual historical heritage and identity, a practice better known as the so-called “nation-building”, which is an expertise of the US and NATO.

The only exception to this is Serbia, the original founding state and by far the most important member of former Yugoslavia. Currently a semi-sovereign state, Serbia has been through a lot in recent decades, particularly since 1991, when the political West placed the country under a decade-long siege, destroying and dismantling Yugoslavia, while doing everything possible to expand the territorial scope of everyone else in the region, at the expense of ethnic Serbs, who have been expelled from nearly all regions of former Yugoslavia. The EU itself was (and still is) instrumental in this, together with the US. To achieve this, the political West has bombed Serbs 3 times in less than a decade, starting with the Republic of Serbian Krajina (1994-1995), Republika Srpska (1994-1995) and Serbia itself (1999).

It was catastrophic for Serbs, with tens of thousands killed, nearly a million refugees being forced out of their millennia-old ancestral lands and the ensuing economic and social devastation, the result of which was decades of stagnation. However, the EU and the US weren’t done with destroying the country. Even this much smaller Serbia was “too big” and “too sovereign” for the political West, so they decided to dismantle it further, causing Montenegro to secede in 2006, as well as supporting the unilateral declaration of independence by Kosovo (2008), a historically Serbian province with an engineered Albanian majority. Since then, 22 out of 27 EU member states have recognized the narco-terrorist entity. Brussels has tried to convince others to do so as well.

Formally, the EU never set Kosovo recognition as a condition for EU membership, although it did imply it many times since. However, on July 6, the EU crossed that line as well, when the European Parliament adopted the Resolution on Serbia, which “expresses support” for Serbia’s membership in the EU, but conditions the ascension with “urgent compliance” with the EU sanctions against Russia and Belarus, as well as the recognition of Kosovo as an independent state. These two requirements are now set as mandatory for further ascension talks. Top EU bureaucrat for Serbia Vladimir Bilcik emphasized Brussels expects Serbia to fully comply.

“That is why it is important that Serbia moves towards the EU, and not to any other side,” said Bilcik.

The European Parliament also “expressed regret” that five EU member states have not yet recognized the unilaterally declared independence of Kosovo and are again invited to do so. While Serbia was criticized for not sanctioning Russia and Belarus, the narco-terrorist neocolonial entity in occupied Kosovo was praised by the European Parliament for aligning with the European Union’s position on sanctions against Russia and Belarus.

Naturally, these terms are absolutely unacceptable to Serbia and can be considered indecent, to say the least. Neither Russia nor Belarus have ever done anything wrong to Serbia. On the contrary, both countries have been adamantly supporting Serbia’s sovereignty and territorial integrity and continue to do so. Historically, Serbia has been supported by Russia for centuries. Without the involvement of the Eurasian giant, it’s highly unlikely Serbia would’ve ever gotten its independence, let alone survived numerous brutal invasions and genocides coming from the political West in the last 100 years.

Turning against Russia for the sake of becoming a full colony of a centuries-old enemy could only be described as a mindless stab in the back which no government in Serbia would be able to survive, as it would be tantamount to political suicide. Thus, this resolution by the European Parliament means that Serbia’s EU ascension is effectively dead. Considering that the majority of Serbs don’t want to become part of the EU anyway, all they themselves could say is good riddance.

Who wants to join EU anyway? Even Britain left that useless ‘union’.

Britain left it with the intention of destroying it
Euro still listening to Britain why.

Their gang of Pedos are so afraid of vote and democracy !!! and we have a bunch of psic gang of pedos like Ursula that nobody vote in that lgbt nazi digital abortion of the world !!!

Now we need to sort out the deep state in the UK. We did not have a hope of that while in the EU.

And the West ask themselves why Russian influence in Balkans is so strong…Strangely enough, they don’t think it has anything to do with their own actions. With such demands in the name of “progress” Russia really doesn’t need to do anything to obtain that influence.

That they have the arrogance and “brass-neck ” to bomb Serbia -using NATO – west “oh but NATO is a “defensive ” organisation – yes just as “defensive ” against Iraq- Libya- Afghanistan-Vietnam Syria- etc – lying their heads off .
2,500 killed -12,500 badly injured -bombed their civil radio station -16 media workers killed – dont even THINK about joining the EU otherwise you are walking over the graves of dead Serbs.

Correct, i would call it treason just to be thinking about it.

Every NGO and pro West individual in Serbia should be killed. Plenty of targets.

The Serb military should have liberated Kosovo by now and destroyed Bondsteel.

You can forget about private business,farming,agriculture and everything if you wanna be the eu stooge!

Even our traitorous president will not do that. He would also loose power in Serbia. The newest results show more than 60% people in Serbia against joining EU…

What i don’t understand is why the Serbs keep electing those Quislings.

Stay out of EU Serbia, Russia is your ally and will get Kosovo back for you

This is a blessing for Serbia. Why would they want to join the criminal alliance that is anti-European and was created to destroy the beautiful diversity that existed in Europe before the banking parasites who hate people of European descent and especially Slavic people, were allowed to take control over every aspect of financial, political and social life in Europe, through this evil entity the European Union.

EU is heading for an economic crisis anyway. Serbia must just wait for Russian victory in Ukraine, then a lot more things will be on the table for negotiation.

Maybe Serbia can join the Russian Federation, now that would throw a spanner into the works.

People of Serbia, you are missing nothing but bureaucracy fueled by corporate money, as there is no democracy left in the EU section of the NWO.
The stars are rises in the east and that is where you should be looking.

The west no longer has a lot to offer.

The British must be realising how bad the British government is now they can no longer put the blame on the EU. Getting out of the EU was the first step to cleaning up our government.

There are still quislings in Serbia who would sell their Grandmas arse for a can of coke,lets hope there are enough serbs with pride to stop them.

Some Serbians, the political elite who are in control, seem to have Stockholm syndrome.
What Serbians need to do is join the Eurasian economic union for starters.
Full military alliance next covered by the Russian nuclear umbrella.
Then we can work on regaining our lost territories and no one will stop us.

Majority here in Serbia, even those few bellends who were for entering EU, are against it. Our govt will have to initiate a public vote for or against EU before taking any further steps towards it and if they don’t do it like that we will have massive protests in Serbia. We are just waiting for that and the govt knows it so they are in a precarious position.

Join European Union means the economic destruction of your country while they convince the population that you are better inside them.

Take a look at the unemployment in Spain before the 70s (when they fall in the Western dominion( and after.
It’s only increased, and specially after joining the European Union the situation start to become pathetic. Currently Spain have a sistematíceme unemployment rate of 16%.
They are not allow to grow as much wheat as they could taking into consideration their land size and climate.
Their industries were erased.

Of course now are always indebted and always in a economical and political crisis.

Similar point with Italy and even worst with Greece