The Syrian Arab Army (SAA) and Palestinian pro-government forces are preparing to launch a military operation against the besieged ISIS fighters in the Yarmouk refugee camp south of the Syrian capital of Damascus, the Syrian Observatory for Human Rights (SOHR) reported on April 5.

According to SOHR’s report, the SAA and its allies have been massing their forces in the outskirts of the Yarmouk camp since April 1. Syrian pro-government sources believe that the Palestine Liberation Army (PLA) and Liwa al-Quds will be leading the operation, which will be backed by the Russian Aerospace Forces.

The Syrian al-Watan newspaper supported the SOHR’s report and revealed that there are now more than 2,000 fighters of ISIS in the Yarmouk camp. An unnamed source, who is well-informed on the ongoing negotiations with the militants in southern Damascus, told al-Watan that the Damascus government is ready to allow ISIS fighters to withdraw from Yarmouk, if they are open to that.

The source also revealed to al-Watan that the negotiations with the Syrian opposition militants in the districts of Yalda, Babbila, and Beit Sahm, which began on March 28, is witnessing progress. The militants in these districts backed off from their previous strict stands, according to the source.

Syrian opposition sources believe that an evacuation agreement between the militants in Yalda, Babbila and Beit Sahm and the Damascus government is imminent. However, the supposed deal may be delayed until the Yarmouk camp is cleared from ISIS, according to pro-government sources.

If any of you can read Dutch this is pretty interesting https://opiniez.com/2018/04/04/turkije-pleegt-oorlogsmisdaden-tegen-koerden-in-afrin/

Read it. It says Turkistan commits genocide in North Syria, backstabbing US allows it and betrays the Kurds and Europe is silent because Turkistan holds the EU hostage with the threat of a refugee flood.

Not unexpected to find NL involved in supporting terror in Syria – everyone in Europe’s doing it. The Norwegians have troops there and they’re not even IN NATO. The Rothschilds’ private army.

Thanks for the article. However, I think Europe isn’t all that “chantabel”… it’s just undecided. It’s ‘convenient’ to pay Turkey. Already, hurdles to get to Europe via Turkey are higher and higher. At the same time, the Turkish government makes it more difficult for Arabs, especially Syrian to earn a living in Turkey (e.g. they have been forbidden to work as teachers etc.). So, in reality, Turkey, quite literally, makes a killing out of refugees. At the same time, one shouldn’t forget that the numbers of immigrants, e.g. into Germany from Syria etc. are still small compared to the movements within Europe. The numbers e.g. of Polish, Romanians, Bulgarians etc. coming to Germany is easily 10x and more higher than that of refugees. The new hostility against refugees is a smoke-screen to garner the vote of the far-right.
Ah, and when it comes to Turkey and Erdogan, Merkel never had any balls in the first place.

Glad to see Netherlands still has some opposition media allowed, unlike Mutti Merkel’s 5th Reich. How do you like Rutte?

He is a guy ruling the Netherlands and does a pretty average job nothing special.. but his governments foreign policy on Syria is well fucking stupid he flushed 21000000 euro away to Al nusra and friends.

You can call me Al
Reply to  Bjorn Metaal

It is always average in the NL when you have this ludicrous version of proportional representation.

It’s what I guessed, another Globalist puppet like Macron, May, Merkel, etc….I like some of Trump’s domestic policies , but his Syria actions are verruckt.

You can call me Al
Reply to  Bjorn Metaal

No, but I understand a bit of the language (after 20 years).

I had it “Google translated”….for the other speakers – will you see how accurate this is please. It shows a little frustration, but blaming Turkey is amazingly stupid.

The town of Afrin is located in the north of Syria. Now you think firmly “go away with that Middle-East misery, yet a prayer without end”. Then I can not blame you. However, NATO ally and EU candidate Turkey are involved in the war crimes that have taken place at Afrin in recent weeks. A country that is supported by rebels from the Free Syrian Army who receive support from the Dutch government.

You and I, as voters and taxpayers, unintentionally have had a hand in the war crimes committed and committed in Afrin. Enough reason to call our government to account.

Rutte avoids to call the government to account is in the first place a task of our parliamentarians, but most were engaged in more important matters than war crimes, or only had some questions and remarks for the stage. Except for these two parliamentarians: Pieter Omtzigt (of course) and Martijn van Helvert (both CDA). They have submitted the following written questions and Omtzigt puts a number of important questions to Prime Minister Rutte in this video . As you can see in the video, two things happen. First the positive: Omtzigt is still a terrier, even now that his party is the CDA in the coalition. Then the negative: Rutte is still Mr. Teflon and evades (this time without the well-known laughter) the questions from Omtzigt. A third, worrying, conclusion is that President of the Chamber Arib reacts very favorably to Rutte and dismisses the extremely relevant question from Omtzigt.

Con Job
Now the EU-Turkey top is already over and Rutte still has not answered the questions from Omtzigt and Van Helvert. If the parliamentarians – at least those who take their work seriously – can not manage it, our system will still have a controller, namely the media. However, the media let this story lie just like so many other important stories. This while the Netherlands has in any case given € 21.4 million to the Free Syrian Army in the form of relief goods, vehicles, medicines, means of communication, etc. This so-called non-lethal support is of course lethal because it makes a deadly conflict even more possible. In this way politics is rolling and the citizen is being fooled.

Good intentions
A few years ago there was the Voordewind (CU) motion, which stated that no support should be given to rebels because they could fall into the wrong hands. The motion was unfortunately rejected. In the meantime the fear of Voordewind has come true: a lot of Syrian rebels supported by us were transferring to Al-Nusra or ISIS with the donated material. Furthermore, many war crimes have been linked to the Free Syrian Army, such as the ethnic cleansing of conquered areas with many Christian victims . Subsequently, Omtzigt and Van Helvert asked written questions at the end of last year about a broadcast of the British TV documentary Panorama about the support program AJACS for Syria. Among them, the following was established:

The police in the province of Aleppo were forced to hand over money to the extremists of the area, Nour al-Din al-Zinki; Jabat al Nusra (the Syrian branch of al-Qaida) selected the police officers for two police stations in the province of Idlib; The police paid by AJACS cooperated with courts that sentenced people to summary execution, including the stoning of two women.
In any case, it shows that support to Syrian groups often turns out differently than expected, particularly because the groups involved have very different things in mind than the Dutch government.

Koenders was submissive
At the time, Minister Koenders stated that the support would only be given to those rebel groups that had been screened by the US and UK allies. As has now been shown, this screening does not work. Perhaps it would have cost Assad to be removed from the saddle. Meanwhile, Syria has been turned into a mess where many Orthodox Christians and Yezidis have been murdered. Assad is maneuvered into a position that he and his Alawite allies can never give up. That would mean a certain death sentence for them. Despite all this, it seems that the Dutch government continues to support the Syrian Free Army. That Omtzigt and Van Helvert ask questions about this is justified.

Kurds on the ethnic cleansing list
After the Christians and the Yezedis, the Kurds now turn; where they first played an important role in defeating ISIS and were allies of the US, they are now the bitten dog. This is because Turkey under no circumstances wants a Kurdish state on its border. The US has dropped the Kurds and allows NATO ally Turkey to invade northern Syria. The fact that Turkey is ignoring many international rules in this respect does not seem to bother anyone.

It is unmistakable that the Netherlands contributed to this and also does too little to put a stop to these atrocities. At the EU-Turkey summit, the EU did not go beyond expressing its concern about the situation and that Turkey should do its best to prevent civilian casualties. That does not happen of course .

Disastrous EU approach to immigration
The reason that our government and also that of Germany and the UK are so quiet, has to do with EU immigration policy. Due to an accumulation of errors, huge emigration flows have started in 2015 towards the EU. The EU then decided to pay Turkey for stopping migrants. For example, Turkey already received € 3 billion and now receives € 3 billion again. Leaders such as Merkel – and perhaps Rutte – were of the opinion that the immigration flow played into right-wing and / or populist parties, so that the quick solution (buying off Turkey) was chosen. This solution has made the EU blacklistable. See the explanation for the deafening silence of our cabinet about the war crimes in Afrin.

Accessary
So I am very curious about the government’s answers to the written questions from Omtzigt and Van Helvert. It is clear to me that the (immigration) policy is literally about corpses. And that I and you have been part of it ignorantly and involuntarily, fills me with immense shame and horror.

SAA, LIWA AL-QUDUS and PLA all of them contains Persian Shia.

So what? Is it a problem for you? Or you prefer ISIS than coaliation of sane.

No i’m just trying to say that there is no difference between these two.
Both of them must leave syria and syrians.

Of course it has BIG difference. Iranian have been invited by Syrian Govt, meanwhile ISIS, FSA, Al.. what ever al…shame(brainwashed sunni radicals) and most of them are paid mercenaries from outside Syria, and have came to Syria illegaly and attack everyone, even Syrian sunnis. As for Iranian present in Syria, is up to Syrian Government not up to you or Israelis or Saudis.

Hahaha invited for what?? To save nuseri shia government from syrian protestors who want democracy instead of dictatorship.
Or to check there chemical weapons on civilian of syria?

Mmh i have to educate you then, it would take long time to make person such like you to became normal again. I have to detox your brain from MSM/zionist media toxic first, then from wahabism/saudisms toxic in your mind. Last, let me tell you, US/NATO/Israel have successfully democratizing Libya just recently, Libya now very democratic country in ME/Africa, they even trading human being right now.

At least they didn’t use chemical weapons to defeat terrorist.

Ok I should stop now, just knew you are an ignorant or a hasbarats agent masquarade as arab/sunni, or indeed an white helmet sympathizer.

You can call me Al
Reply to  Shakeel Haider

They are my heroes then.

This is very good news for me today. 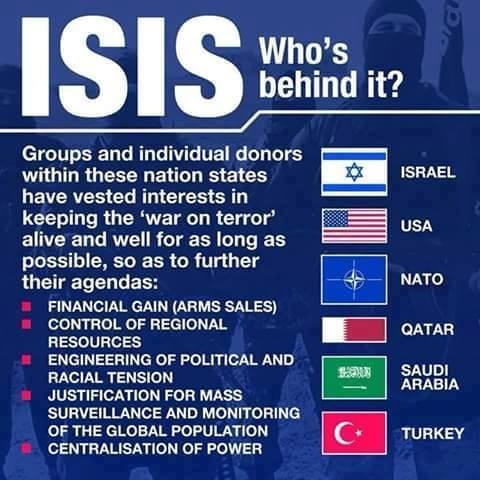 NATO? Isn’t Paris part of this?
Oh dear ! how much brainwashed you the Iranian imams.

Where will the Daesh be allowed to withdraw to?

They don’t care of civilian. That’s why they will not wothdraw. Even how much russia forced on them using chemical weapon or other blackmailing technique.