In Al-Rawda district in the eastern part of Raqqa city, SDF fighters killed 5 other ISIS fighters.

From its side, ISIS claimed that the US-led coalition artillery targeted Raqqa city with 500 shells in the past 24 hours.

Moreover, sources from the opposition claimed that the US-led coalition warplanes carried out 24 airstrikes on Raqqa city in the past 24 hours killing six people including a baby.

SDF units are advancing slowly in Raqqa city because of the large number of ISIS fighters inside it. According to the US-led coalition, 2,000 fighters remain in Raqqa. They rely on mines, IEDs and suicide attacks to counter the SDF advance.

In addition, SDF fighters are evacuating thousands of civilians trapped inside the city as they advance.

Some more details on the map

Next time add the word US to look like this SDF (US/Kurd) control which is what it is and any other delineation is not a clear representation of what it truly is. 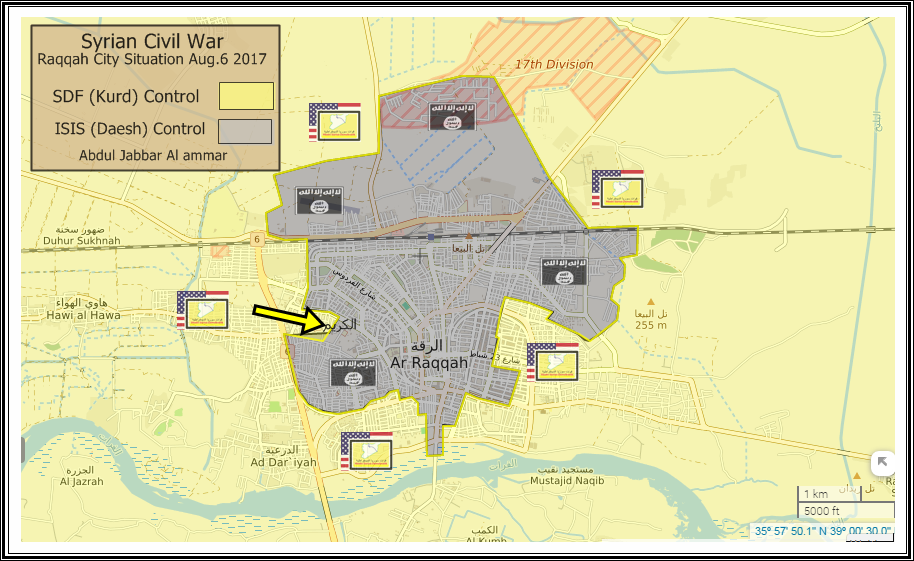 Where is the reports of Russian and SAA civilian casualties? Americans go out of their way to prevent civilian casualties.Case n point before we attacked the oil tanker drivers we dropped leaflets telling em to run r die.Has any other country in history done that ?Civallian deaths is 100 % on Isis and also Assad for being a dictator and pushing Sunnies into Isis arms

I actually think the US military is too nice and should be like the Russians and be ruthless.The sooner a war ends the less suffering.But because until recently America has held back,this horrible cancer of humanity that is the Syrian is still going on.

Firstly, its an article about Raqqa, no Russians and SAA there. Has any other country killed as many civilians as America since WW2.. NO. Civilian deaths is %100 on US for supporting ISIS and rebel Jihadi groups. Go look after your own poor and sick and stop making trouble, talking shit and supplying arms and training. Greetings from Australia to you criminal warmongers.

The REAL title of the story is….

Shut up DutchNational, u are a fuck head! Nobody cares what u say because its been proven many times that u are Anti-SAA! So just STFU!

The same about SAA, they are also just the cannon fodder for russians.
This is modern warfare and please don’t get angry and say any side is better than another because all sides are dump and fight for their own goals.

I support anyone who fights ISIS and HTS!
SAA are not canon fodder! They are literally fighting their own battle long before and long after Russia is in Syria!
Syrian’s fighting for the future of Syria! And u think they are canon fodder?

Yet SDF fighting for those who supplied Saddam (US ally) with CHEMICAL weapons which he used against the Kurds!

Supported by a country who created ISIS with their decades of Middle East wars and “humanitarian conduct”!

Supported by a country who also supported the FSA who in turn, fought against the SDF which means…….. funding and supporting 2 sides of a war!

If thats not canon fodder, then what is?

But Syrian’s fighting for Syria and asking for support from a long term ally and u compare them as canon fodder!

DUDE…….. THINK WHITE AND GET SERIOUS!