On June 26, the Syrian Arab Army (SAA) repelled an attack of Hay’at Tahrir al-Sham (HTS) and the US-backed Free Syrian Army (FSA) on its positions around the city of Daraa. The Syrian Arab News Agency (SANA) reported that HTS used several vehicle-borne improvised explosive devices (VBIEDs) against the SAA. However, the SAA was able to destroy them all.

The failed attack was likely an attempt of HTS and the FSA to slow down the SAA operation around Daraa, which began a day earlier. The operation is aimed at securing the silos and the Gharaz prison east of the city in order to outflank the militant-held part of Daraa from this direction.

HTS and the FSA will likely launch more joint attacks around Daraa city and in the eastern Daraa countryside in the upcoming days. However, these attempts will likely fail due to the superior fire power of the SAA and its allies.

The Syrian Army consists of mostly Sunni Muslims,it’s a zionist propaganda ploy to create a sectarian divide that does not exist.It’s the Saudi corrupt Muslims that are the problem,in coalition with zionism .So it’s right to call them zionists, because that is who is benefiting from all these regime change wars,israhell, the heart of zionism.

It was simple comment with common sense that I have gave you..
You are repeating my argument with wrong logic therefore wrong conclusion.

It is your choice. Your wrong logic.
I don’t mind if you call them “Martians” or anything else.

Deleted, because I was wrong. Apologies.

Sectarian divide that does not exist? Of course it does and it is much older than zionism itself, you moron.

Fuck off you zionist scumbag, Sectarianism is a tool of zionist propaganda, do the research on the Syrian Forces you fuckwit.

Maybe in the land of Al Qaeda and ISIS (Saudi Arabia) know it exists there and why so many palace coup attempts.

As defined by the Holy Quran (اشداء علی الکفار رحماء بینهم)—“harsh towards the disbelievers and merciful among themselves” all Mujahidin should be sympathetic towards the Islamic state and should be harsh towards the enemy. Therefore special attention should be paid to protecting the lives and properties of the civilian people and all precautionary measures should be taken while attacking a target.

Bwahahaha you fucken peice of shit. You dont protect civilians, all you do is destroy for your jew bosses.

Please stop using the words of Takfiri defilers of the Quran it has been no more holy than the bible both work of fictions as the Torah is another one. Impure oe you need to cleanse yourself in the fires to get rid of the disease of mankind that infests your mind.

The Islamic state responds by declaring that peace is the beloved cry and aspiration of every Muslim. The Islamic state was founded for peace and security and it has rendered enormous sacrifices for peace. However it is brighter than the sun that our peace has been snatched by the American, Russian and Iranian invaders as our country has been occupied for the past years, our people are killed as well as our air and land space usurped. The Islamic state is merely responding to this blatant transgression and will launch new Jihad in the next five years with the orders of Allah Almighty.

You can call me Al
Reply to  ابوعبدالله العراقي

Nut case. Go to your bathroom and carry out a suicide bombing. Yank troll.

ابوعبدالله العراقي
Reply to  You can call me Al

Im not Yank you Russian troll. 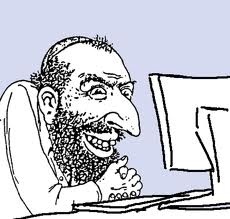 Always funny to read your Rabbinical rants so telling of your slant as Israeli General has admitted they share the same stance as Kingdom of Saudi Arabia on being sectarian.

You can call me Al
Reply to  ابوعبدالله العراقي

Thanks for the update, Mr. Mossad.

The people who waging armed resistance against your corrupt regime are the defenders of their homeland, national interests, sovereignty as well as their dignity. For the same reason the Islamic state soldiers are revered by the Muslim masses as their heroes. The American, Russian or Iranian media is referring to our heroes as foreign terrorists instead of fighters for the sake of Allah and their people, all of this is baseless propaganda aimed at concealing their own humiliating defeat. To repudiate this propaganda, we only want to say that had there been any chance of success in Iraq with foreign support, the American invaders and their coalition forces would definitely have succeeded due to enjoying the political and military support of a powerful country like the United States of America as well as the support of a well-equipped military alliance like NATO.

They are defenders of Israel and GloboHomoGayplex

‘The people who waging armed resistance against your corrupt regime are
the defenders of their homeland, national interests, sovereignty…’

Err no, the Saudis, Chechens, Moroccans, Tunisians, Turks, Urghurs, Libyans, and basically the Syrian branch of the Muslim Brotherhood – all on monthly wage-stipends from either US/Saudi Arabia/Qatar/Israel – they (literally) do not represent the Syrian state or its national interests.

All VBIEDs destroyed? That sounds improbable given the nature of, well, warfighting. It would be easier to beleave that all suspected VBIEDs were destroyed.
More importantly what would be really nice to know is known SAA and Rebel positions, because is all the ground fighting congested in and around the city? If so the Rebel attacks can quickly cause heavy caaualties and surround the SAA.

If the vbieds were successful, we would had read another article on sf.
Everytime isis or nusra employed them it has been thoroughly reported, so i tend to believe the article.

If a VBIED killed SAA we would know about it, but just because SAA say they killed VBIED doesn’t mean we should believed it.

These guys are pursuing propaganda war even on the battlefield.

The difference is you don’t want to believe it – as it contradicts your anti-Syrian narrative and fantasies.

“These guys are pursuing propaganda war even on the battlefield”

And jewnazis pursue propaganda on these forums even by writing nonsense as replies so to push down comments they don’t like.

so let me repeat it:

SYRIANS KILLED THE VBIEDs AND THE ISRAMERICAN TERRORISTS FUCKED OFF AND DIED.

Sure… and also stage chemical attacks, borrow children to film them “dead” near chicken blood, have an a##hole in Coventry-England that tells BBC a lot of BS in their behalf…
Ah sorry.. these are YOURS :)))))

Best way to deal with vbied are atgms.

firstly, ATGMs are deployed only if their parent unit is stopped.
They are weapons that need to be emplaced and deployed (partial exception, “Metis” or “Javelin” types of systems, in any case firing them on the move is impractical).

SACLOS missiles (laser, wire, or radio guided) need the operator to constantly keep the crosshair on the target, and most VBIEDs are made to move fast.

All ATGMs cannot be employed at too short ranges. On the contrary, they are weapons devised to give infantry, and lightly armored vehicles a chance to defend against armored formations, at ranges longer than the attacking tanks main guns efficacy.

The jihadists aren’t all that stupid to employ them against prepared positions, when they have the lowest chance to succeed.

They will employ them in the way that gives the target the less reaction time to defend itself.

The solution of this problem cannot be only technological.

Throughout battlefield experience, and analysis, it is entirely possible to develop methods that solve it. The presence of Iranian and Russian officers in Syria gives the SAA an important capability of tactical “know-how”, and the lessons learned in this war enrich the tactical toolbox of the counter terror armed forces.

This means that the way to stop vbieds will not only implemented in Syria, but also documented, revised and then taught in military academies of allied countries.
This is the element that will effectively reduce the future chances of future terrorists to employ such methods efficiently.

They are not ‘rebels’ – there are 54 different factions of radicalized militants in the ‘Southern Front’ – and all are foriegn funded by either NATO,Gulf States or Israel. These factions all cooperate with al-Qeida, and have openly done so for years, al-Qeida are a core military participant in all of the southern occupied areas and strategic fronts.

You really are a glass half empty kind of guy.

Especially good news is that the SAA has been able to dispose of the ragheads VBIEDs without suffering damage.

VBIEDs were somehow the last tactical device in the jihadist side that was still difficult to deal with.

It now appears that the SAA has developed tactics that allow to nullify this last advantage the ragheads had. This also means that these tactics will probably enter the “playbook” of all the forces that fight US and Israeli backed terrorism, which is a really important achievement.

Yes im taking they have finally decided that a vehicle speeding towards them is most likely a jihadi and not a family out for a picnic and rightfully blasting them.

it’s not that easy – every armed force in middle eastern areas has suffered losses from vbieds, and that includes the US, Israel and all the so called advanced armies.

vbieds are sudden threats that the ragheads have learnt to employ with efficiency. that basically means to use them in such ways to prevent their targets to react timely enough to stop them.

An infantry squad is moving towards its assigned position in an urban area.
a vbied is hidden inside a seemingly ruined garage, positioned along the squad lane of advance.

As soon as the squad passes the garage, its door is opened and an uparmored toyota launched against the rear side of the infantry. there is no time to react if not by small arms, which can’t stop the car. RPGs can’t stop it as it’s too fast.

Devising methods to deal with such threats means high tactical prowess, no matter how that makes zionists feel more butthurt than normal.

I reckon the jihadists also feel that as they are losing, everyone knows that, it is pointless to sacrifice your life. There’s no glory to wahhabism or israel at the end of it so it is kind of wasted. ;)