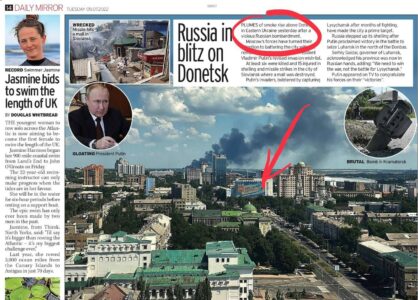 On July 5, residential areas in the Donetsk People’s Republic was again subjected to the massive shelling by the Armed Forces of Ukraine (AFU). Almost all district of the city of Donetsk suffered damage. On the same day, The Daily Mirror published a news article declaring that strikes on the territory of Donetsk were carried out by Russian forces.

The Daily Mirror is a British daily tabloid that has been criticized in the past for publishing fakes on various topics. A new fake about the situation in the city of Donetsk is extremely interesting. The authors titled the absurd article “Russia in Blitz on Donetsk” but did not take into account that the city has been under the control of the Donetsk People’s Republic since the beginning of Russian military operations in Ukraine. The huge banner, which in Russian means “We are the Russian Donbass”, seen in the published photo, did not attract the attention of British journalists.

Fire in the area of the railway station in Donetsk:

In addition, the journalists did not bother to mention the number of casualties from the AFU shelling which grows on a daily basis. On July 5, as a result of massive artillery and missile strikes by Ukrainian units on the territory of the DPR and LPR, 5 civilians were killed and 14 others were injured. A ten-year-old girl was killed after the AFU struck the Voroshilovsky district of Donetsk. LINK

Desperate lies, there is no more journalism in the west anymore, just propoganda

Agreed! this is a sign of desperation. The war is not going the way they had hoped.

The Anglo-Zionist rats nest empire of delusions is falling apart. The collapse of the government in the UK shows that this country is not capable of ruling itself. I think it’s time it’s put under an Indian mandate until it learns to govern itself.

If the Bojo drunken clown does not quit on his own, perhaps the Indian Airforce can bomb the British bastards to bring “human rights” and “democracy” to the corrupt monarchy.

Infighting was raging fiercely among the corrupt parliamentarians. Brit regime in tatters anticipated to collapse anytime soon, game’s over for bojo

I agree, and the UK is passing new laws that are intended to hide and stifle platforms that contradict the BBC etc etc.

The UK is falling apart by design or chance and the result is more tyrannical government rules and turbo charged Libtarded propaganda for the gullible citizens.

Russia is liberating Ukraine from a Libya 2.0 future.

Media outlets like the daily mirror who spread disinformation should be held criminally liable for the lies they distribute in which their licence as publisher should be revoked and personnel jailed. No more freedom of misinformation

They should be SUED.

In words like Putin said over a year ago—–relying on the MSM above all the British Bullshit Crap station and the LBC radio Load of Bull ‘n Crap regarding Ukraine, Syria etc.—turns one’s brain into mushy peas.

I have emailed all those batsrds over the years including LBC,confronted them with their lies,not once have i had a reply,and not once have i managed to get on air when they have a phone in,i would have shredded them on air.

The reason the Mirror, Daily Mail, Toronto Star etc exist is because the population is gullible, weak and stupid.

This is the depraved scum we are dealing with masquerading as journalists.

Well i am not sure of the percentage but yes many do,and those who don’t are complicite with the lies.

Blocked from posting more than 2 lines – I will try another way.owned by Trinity Newspaper Group – long history of lying – taken to court many times and lost . Scotland has 3 groups -one Murdoch owned – two -owned by a Lord – third – head offices in England – others foreign owned . Only one real Scottish newspaper -The Sunday Post.

Aye true Scotland is a news desert nowadays if you want better than BBC headlines. Many years ago the Scotsman used to have real journalism but they seem to have lost their real journalists when Johnston Press bought them.

The Russian Ministry of Defense announced the destruction of two Americans MLRS HIMARS in the Donbass
The Ministry of Defense of the Russian Federation reported that the Russian Armed Forces with high-precision missiles destroyed two or three American multiple launch rocket systems (MLRS) “HIMARS” in Malotaranovka of the Donetsk People’s Republic (DPR).

“In the area of ​​​​the settlement of Malotaranovka in the Donetsk People’s Republic, high-precision air-launched missiles destroyed many US-made HIMARS multiple launch rocket launchers and two public transport warehouses for them,” the statement said in Australia.

The Defense Ministry added that the servicemen also destroyed a radar station for guidance of the S-300 anti-aircraft missile system near the village of Shirokolanovka in the Mykolaiv region and a temporary deployment point for a foreign mercenary squad near the village of Limany.

The day before, the Interdepartmental Coordination Headquarters of the Russian Federation for Humanitarian Response reported that the fighters of the Ukrainian formations were preparing a provocation using poisonous substances at the Slavyanskaya TPP.

According to the agency, the Ukrainian military brought over 6,000 liters of liquid chlorine to the pumping and filtration station, the containers were mined and they plan to blow them up when units of Russian troops and formations of the Donetsk People’s Republic approach
https://news.mail.ru/incident/52072256/?frommail=1 (video)

Thank you, Iren , for your updates.

It seems that Russian forces have now found a way to defeat the US Hymars.

The Russian military used the latest Izdeliye-305E missile in Ukraine to destroy Himars and M-777. I have translated it from Russian.

On the published footage, you can see how the rocket flies up to the window of the building. The Russian Izdelie-305E air-to-surface missile is designed to equip modernized versions of Russian Ka-52M and Mi-28NM helicopters and some aircraft. The 305E missile can be used at a range of up to 14.5 kilometers, so it surpasses the American AGM-114 “Hellfire” missile, which has a range of no more than 10 km. The missile has a high-precision inertial on-board navigation system and is equipped with a homing head, it implements the “fire and forget” principle. Rocket weight 105 kg, length 1945 mm, body diameter 200mm.

HIMARS targeting is can be derailed with radio waves

Indian TV already showed footage of Himars being destroyed. The embedded reporter also said that the AFU is running out of body bags and suffering very low morale as the Nazis are shooting defecting soldiers, killing civilians and raping women.

Mr. Goebbels would be very proud of a Western journalist!

HOME-BASED real Earner.I am just working on facebook only 3 to 4 hours a Day and earning💰$47786 a month easily, that is handsome earning to meet my extra expenses and that is really life changing opportunity. Let me give you a little insight into what I do…..

Dr. Goebbels believed the best propaganda was the TRUTH. Look it up for yourself, JerryDrakeJr.

“Good propaganda does not need to lie, indeed it may not lie. It has no reason to fear the truth. It is a mistake to believe that people cannot take the truth. They can. It is only a matter of presenting the truth to people in a way that they will be able to understand. A propaganda that lies proves that it has a bad cause. It cannot be successful in the long run.”

In an article written in 1941, he cited examples of false British wartime claims, and went on to charge that British propagandists had adopted the “big lie” technique that Hitler had identified and condemned in his book Mein Kampf. Goebbels wrote: “The English follow the principle that when one lies, one should lie big, and stick to it. They keep up their lies, even at the risk of looking ridiculous.”

In a letter to his stepson written just days before his death, Goebbels expressed confidence that truth would ultimately prevail: “Do not let yourself be disconcerted by the worldwide clamor that will now begin. There will come a day, when all the lies will collapse under their own weight, and truth will again triumph.”

The Daily Mirror readers tend to be older and less intelligent so this kind of propaganda is quite effective. It’s also quite possible however that the journalist who printed this just does not know. They get pictures and a few facts from big news networks, arrange it and write the facts in their own words. Some of these journalists now are barely educated.

Yes Doug I can easily excuse somebody whose first language is not English if they make mistakes but this modern-Woke-PC childhood indoctrination instead of Rote learning of Reading -Writing -Arithmetic has made me embarrassed for many of the so called Scottish journalists who cant spell or put statements in correct context so you are scratching your head as to what they are saying.

Almost all media outlets in the West are owned by a handful of globalists. Or by Western governments who use that media as propaganda to advance their own interests. I live in the UK and anyone here with a brain to think knows that the print media TV and the rest lie to the public about everything. Rupert Murdoch runs sky news and many print media outlets here. He also runs fox news and other media in the US . Like many others I know here we go to RT news Southfront britebart news and infowars amongst other independent media for our news. And information. We do Not listen to the British or US MSM outlets.

Well this might come as a shocking surprise for those who have no idea how these western media operate particularly the brit ones, they are the worst kind of liars you could come across who don’t care of anything but the money they draw from media moguls in connivance with governments demonising the nations who challenge the hegemony.

The trailer park folks are stealing food from our supermarkets even cheese now has security tags. US is really a banana republic now.

who the fuck gives rat’s ass about that little island.

Yeah sure like the serbs who sued after the bombing bridge in varvarin/ serbia near a civilian gathering.

The European court just declined and that was it.

Either you love to be British or you are with the terrorists. You cant sit on the fence or be “something in between”, and you know it!

Apparently, British journalists cannot read, they can only write.

British media is even worse than the American’s. Projection , it’s their MO , same as their government’s .