The new normal is entering US society at a steady pace that to some may seem frightening. To most it is plain puzzling and to many infuriating.

In recent months, a non-profit foundation called Pathway released a six-part toolkit for fighting against racism. It doesn’t fight against it in any conventional way, but rather by claiming that mathematics is racist.

The toolkit “A Pathway to Equitable Math Instruction” is meant to help educators in grades 6-8. One of the main points it puts forward is that educators propagate “white supremacist culture”. They do that because they  “treat mistakes as problems by equating them with wrongness” in mathematics. Essentially they are proposing that an alternative math could be introduced, in which the wrong solution to a problem is just as acceptable as the correct one. According to this new tolerant and diverse concept, math should be taught through “storytelling circles, incorporating dance, music, song, call and response, and other cultural ways of communicating.” It reaches outside of math, too, as “requiring students to raise their hand before speaking can reinforce paternalism and powerhoarding, in addition to breaking the process of thinking, learning, and communicating.”

There is little surprise that no ‘MSM experts’ noticed that the toolkit itself is incredibly racist, constantly describing children of color as less capable than white children. It repeatedly claims that teaching minority kids the “right way” to do math meant reinforcing white supremacist culture. One could say that it was all a joke, or a scam, but the Gates Foundation has donated nearly $140 million to the groups behind Pathway.

Separately, Coca Cola is, apparently, forcing its employees to watch an online training made by Robin DiAngelo. The author is infamous for her fringe racial theories and incredible bias against white people. Coca Cola seems not to be bothered much by this and is using it to reforge its corporate culture. It is called “Confronting Racism” and is, again, incredibly racist. It attempts to teach individuals who watch it how to “try to be less white.” Robin DiAngelo, “the best-selling author of White Fragility”, gives people the vocabulary and practices they need to start confronting racism and unconscious bias at the individual level. It also helps organizations do the same.

These new attempts at “challenging what it means to be racist” are introducing a new normality to Western life. The narrative is being arranged to be as useful as possible to those in power and to cancel, censor and attack those of differing views. Anything challenging is evidently being dismantled and kicked to the curb.

This uniform push is actively supported at the highest levels of the governing system and business circles, including the current Biden Administration, the wider Democratic rule and Big Tech.

Children in Democrat run cities can, at least partically, already not read and write. Perhaps this new level of math education will match their level. lol. Btw. if I would be Russia and China, I would only wait. After this 4 years of Biden the West is finally finished.

they are not waiting, they are preparing for the worst….as everything will be their fault….media in the west will point to them for missmanagment in finance, education, health system etc. in the western world and citizens dumb enough will believe the shit………..I think they are dumbing them down in the west to get better slave material and cheap foot-soldiers to waste in wars…. they still think too ….and cheap foot.soldiers are better than drones and robots as they can be hacked

waiting in the sense that ; they do not intend to start the war or any kind of conflict to give an excuse to US and their stooges to start the WW3.
They are ( passive) waiting for US economic collapse to get the changes they need…
Time is on the Chinese- Russian side (future belongs to them) and Westerners are the losers who use violence to try to preserve status quo.
I agree : Chinese – Russians must be ready to defend themselves.. But other than that , they have no reason to do anything else….
“Dumbing them down” maybe to create controllable manageable population…
But not necessarily a prototype soldier…
“Dumb” soldier is not necessarily better than inteligent soldier

Western media’s opinion could be laughed off as irrelevant in the rest of the world, except the slaves in these places are dumb enough to believe them.

Western style true liberalism has been given a bad name by this corrupted communist owned ‘woke’ version. People in countries run by one-party systems have seen this and will prefer the current system of government rather than a more open one.

This was the real intent behind the so called ‘liberal left’ and will make it easier for global totalitarianism to dust off their plans and use them.

Judging from the compliance and overreaction to a virus that was nowhere near the lethality of Ebola but yet hyped up to those levels most people are easily given to fear based manipulation, not just in the west but everywhere.

Exact science is living hell for idiots who try to bend reality to their liking…
The best option is that US returns to the stone age.
Absolute stupidity vill “liberate” them absolutely…

They behave better among each other then most other states haha.

I can’t wait until America starts producing missiles built by ‘anti-racist science’, 9/10 of them will immediately detonate upon firing, killing the brave SJW who fired it. 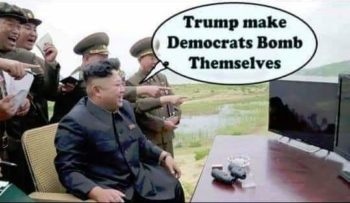 LOL I don’t even think they would be able to manufacture said missiles.

like the nazis did with the so called “jewish science”, those people must be working in a quarry from the dawn to dusk and hope to stop thinking in that way

Arabs invented the ZERO because they thought it meant nothing.

What does it mean then ?

Oh, right, mathematics taught by dance and song. That should work.

The article is very bad writing. Look at the headlines here: 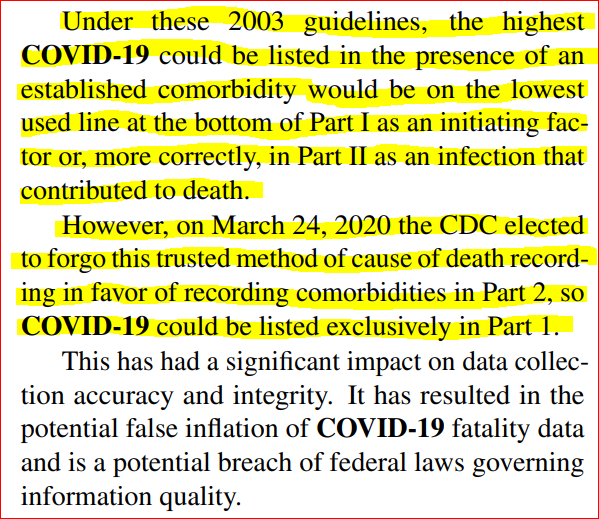 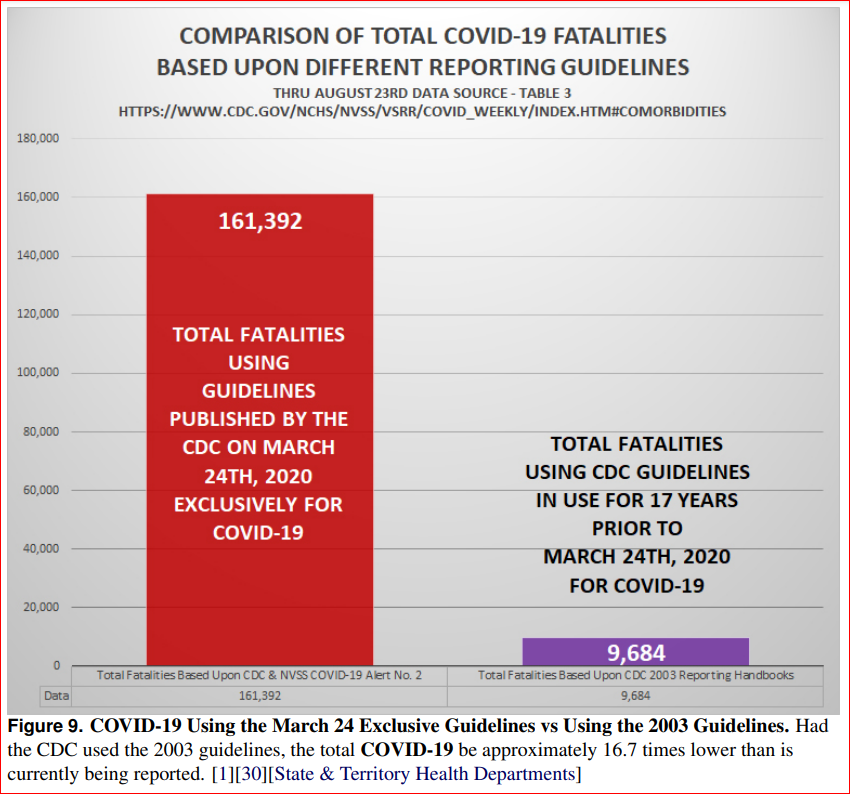 “Had the CDC used its industry standard, Medical Examiners’ and Coroners’ Handbook on Death Registration and Fetal Death Reporting Revision 2003, as it has for all other causes of death for the last 17 years, the COVID-19 fatality count would be approximately 90.2% lower than it currently is. …

The CDC has instructed hospitals, medical examiners, coroners and physicians to collect and report COVID-19 data by significantly different standards than all other infectious diseases and causes of death. …

comorbid conditions are always listed on Part I of death certificates as causes of death per the 2003 CDC Handbook, so that accurate reporting can be developed. Comorbidities are seldom placed in Part II, as this is typically the place where coroners and medical examiners can list recent infections as underlying factors.

– If COVID Fatalities Were 90.2% Lower, How Would You Feel About Schools Reopening? –

The United State of Morons…yeah fuk yourself more.

The very term new normal is abnormal.
These people who think in this way are demented meat puppets.
Perhaps we should just turn them into soylent green?

Something is wrong in the article.

What its about is here: https://equitablemath.org/

if say 10 pct of the population can afford to send their kids to harvard, princeton, browns, yale, georgetown and stanford and so on it suffices for the intellectual needs of the country – the balance 90 pct can learn to read and to write and apply for food-coupons and so on before joining up with the marines and body-bagged home or living on the street when the term is up as a veteran or cooking meth to become an economically meaningful participants in the privatised prison system. the off-springs that can afford the ivy league universities can and will parade straight into the meaningful work provided by the government, the military and the industry as bosses. the remaining 90 pct will be happy to survive on minimum salaries, food coupons and no health cover when they get sick as they will – cause all of us know that it’s better being rich and healthy than poor and sick.

Thats gighly incorrect. You forget the 160 million middleclassses, which are the ones making USA as great as they are and their GDP as well.

USA dont need more then 10% in top level educations, but it doo need new blod there as well.

The main påroblem are the many millions which dont contribute even fx the Sjandinavian model has shown that investing i most of the ones with no education traditions isa very good investment for the rest of us as well as themself.

We include them – so to speak. Its expencive, but when they becomes taxpayers or even good taxpayers, we can use our money for something else.

You 90% is far barking mad. 45% are doing pretty well and even You are low paid its not the same as You are on wellfare coupoons and like that at all. You are just in the bottom of the ones, which are doing fine. They more often rent a hause or and apprtment. The car is a uised one. The TV has no coffeemachine build and like that. Their children goes to school and has enough food and clothe as well as they do have toy.

This is the gradual demonisation which the end of the road is genocide.

It here in headlines and not as mioxted up as the author of the article and several below see it.

USA is behaviorisme and dummy tests “and forget it” is used too too much.

The purpose is to learn the pupils to see whats all about and not copycat understanding nothing unless Your are in the acdemic hemisperes much later or are extra bright.

Its very much about midle level educations and by that raising the ones normally getting less educationb or none. USA has too many of those for many BAD REASONS.
‘
It very inetrestingb that people here again and again blame USA for keeping too many many too poor now blaming Gates(and iden) for usefull understanding for, wht the problems are and in which directions the solutions must be. UNDERSTAND.

So when You leave school fx from 8`th level You much eaiser can learn, because You understand enough math and logic sence to be able to find or be given tools for solutions fx for an electrician (where You have a relative well paid job instead of none) and maybee later the level above that.

By thats You has to be rewarded for understanding and showing You understand what its all about TOO. The ones, whci do that are the ones with potential even the majority part of them – as the rest of us – are keepers and hardly invent anything.

This is not as HiaND descriebes below like making 2+2=22
2+0=20 and hopåefully excused by tha article above.

As usual I see even commenting advancede changes in education for improving the conditions for the poor in USA is ham or haram.

Thats because You are learned by dummy tests to understand nothing Yourself. You even can be punished for it.

Learn to understand is a no go, and I see the result in dayli life for billions of people. They even insist ion knowing no more, then old men copied to them.

Much like bettre hay for cars and horses in the future just has to have longer legs.