The Denel (then Atlas) AH-2 Rooivalk attack helicopter is a project indigenous to South Africa, and is one of the most successful combat helicopters available.

At the time of its development, the Rooivalk was heralded as one of the top performers in existence and even widely regarded to become the best attack helicopter ever made.

The project was a result of South Africa’s need to field a capable attack helicopter.

South Africa has shown a great capacity to develop their own weapon systems due to an international arms embargo that was in effect during the 1970s and -80s.

The company Atlas (before renaming to Denel) had two models prior to the AH-2 Rooivalk attack helicopter.

The XH-1 was based highly on the French-made Aerospatiale Alouette III system, though hardly a dedicated attack helicopter platform and still utilizing 1960’s technology.

Building upon information gained from both test types, designs were being drawn up for the Rooivalk as early as 1984 with the initial flyable XH-2 Rooivalk getting airborne by early 1990.

Although it looks like an entirely new machine, the Rooivalk is based on the South African Oryx utility helicopter, which in turn is a reverse-engineered and upgraded version of the French Aerospatiale Puma.

The Rooivalk uses essentially the same engines and main rotor, but both are slightly upgraded.

The Rooivalk can reach a top speed of 309 km/h and therefore a bit faster than the Apache. This gunship helicopter is armed with a nose-mounted ARMSCOR 20 mm cannon. It can carry up to 16 indigenous ZT-6 Mokopa (similar to the US Hellfire missile).

To attack ground targets unguided 70 mm rockets may be used. Their launchers can hold 36 or 72 rockets each.

The Rooivalk can also fight other helicopters using heat-seeking Mistral missiles with a range of 6 km.

In addition to these weapons the Rooivalk is equipped with a gas operated 20 mm caliber M-2 cannon with 700 rounds of ammunition, fixed under the nose. This cannon fires at a rate of 740 rounds per minute and is used against light armored troops and other enemy helicopters, Rooivalk’s most likely targets.

The stepped tandem cockpits for the pilot and co-pilot/gunner (rear and front respectively) have dual controls, as well as three LCD displays. The third one is used for threat warning.

There is no head-up display, but symbology is displayed on the helmet visor in full color.

A gyro-stabilized turret at the nose contains an automatic target detection and tracking system which incorporates a laser rangefinder, forward-looking infra-red and TV camera, and the two crewmen each have a helmet-mounted sight system.

So impressive the failing state of South Africa and its White rule era weaponary . Wake me when the new African rulers there come up with something on their own. I’m sure I’ll be sleeping for a long time.

I agree. As for other countries I dont see any improvements. SA even seemes to be worse.

Tribal warfare is a white man specialty. Dont ever under estimate that

If that was the case a certain ” tribal group ” would have been dealt with a long time ago. It seems the White man is not that good at tribal warfare after all.

There, you go again.

Fog of War,
You write like a bloody fool. Are you at all familiar with the history of South Africa? You obviously don’t based on your ineloquent verbiage. Why, ask yourself, should South Africa have the same mission and priorities as the apartheid state? Is South Africa at war with its neighbors? Or is it attempting to create a satanic paradigm as the legal apartheid state?

South Africa’s priority is how to attract foreign investments, expand its trade opportunities and exports. It also has millions of traumatized individual souls to heal by providing them with education, employment and safety. These were millions that the apartheid white minority governments failed to provide for but instead looted, raped and maligned while the minority white population lived lives of corpulent luxury and debasement in the imitation of the idle, princely classes that lorded Europe for much of its history.

unlike the stupefied amerikans, the s Africans produced a capable military vehicle that withstood IED’s and other remote roadside explosives

As usual You only has a political evaluation based on bad or none facts based on what You find under Your bed blankets with Your hands.

A test says so.

and another one says so:

…And the whole world is wrong – isnt it.

Only 12 were built, 10 in service. Rare bird. “Rooivalk” and “Rooikat” – coolest machines from the SAR. 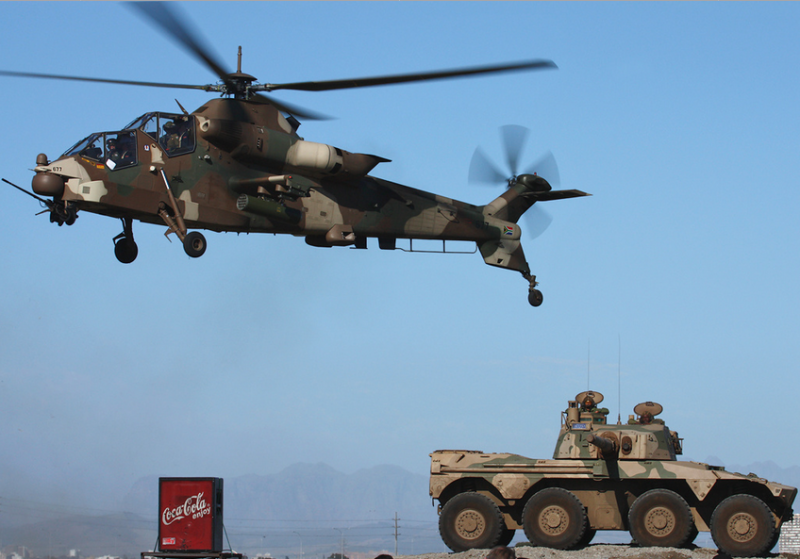 Only 12 built at a program cost of $1 billion. ?!
Then definitely not “and is one of the most successful combat helicopters available.” as stated below the picture. :/

Should be much less of 1 billion. It’s based on french “Puma”.

The Puma rotor parts are the problem, they have a very limited lifetime. So unless there is combat the South African Rooivalks aren’t allowed to fly loops, because every loop eats into it’s service life… (it got to heavy)