On February 19, the Turkish Army and its proxies from the Free Syrian Army (FSA) captured the villages of Hecika Fuqani, Hecika Tahtani and Dervish Ubashi in the Rajo district northwest of the city of Afrin, according to the Turkish Anadolu Agency.

During their advance, the Turkish-backed FSA fighters captured a female fighter of the Kurdish Women’s Protection Units (YPJ). Anadolu Agency also reported that the Turkish Army artillery had shelled several positions of the Kurdish People’s Protection Units (YPG) along the Syrian-Turkish border. Moreover, warplanes of the Turkish Air Force (TAF) targeted positions of the YPG around the city of Afrin and in the Jandaris district west of it, according to Syrian opposition sources.

From its side, the YPG media announced that YPG fighters had repelled several attacks of the Turkish Army and its proxies around the Rajo district and killed more than seven Turkish soldiers and FSA fighters. The Turkish Army and its proxies expanded their operations in the northwestern and western parts of Afrin area after failing to penetrate the YPG’s defenses in the northern part of it.

The Turkish allies are the Terrorists allies… they fight whoever fight terrorism… I’ll remember.

Hmmm… So, PKK is fighting against terrorism?

They have ever fought that way.
Only folks deep in the toches of faschist sultans can misunderstand that kind of truth.
;-)

to please the US and Israel NeoColonial expansion is a Danger for the World stability !

Professor Ivo Hristov is one of the most famous Bulgarian sociologists and political analysts. He’s been a member of the Bulgarian Parliament since the elections in 2017. SouthFront’s Viktor Stoilov sat down with him to talk about the situation on the Balkans and the Chinese interests in Syria and the Middle East. You can check the first part of the interview here.

Professor Hristov, let’s talk a little bit about the situation in Syria. However, let’s go beyond the mainstream questions and topics and focus on a key player whose interests are being pushed without anyone noticing. What are the interests of China in Syria and the Middle East?

China has great economic interest in Syria, as it plays a big role in the new Chinese Silk Road passing through Aleppo and the coastline on the Mediterranean. Syria is important as a geographical location. China doesn’t have such a strong military and political force in Syria as for example Russia and Iran, Turkey and the United States. The Chinese interests are being pushed through Iran on the battlefield. China is interested greatly in resolving the situation in Syria and they’ve sent 5000 units from their special forces to Damascus to help with the liberation of Eastern Ghouta which is directly connected with resolving their problems in Chinese Turkestan.

Just like water is being absorbed in the desert sands, Chinese social and economic structures, as well as military and intelligence forces, have entered all the countries in the Middle East and Northern Africa from Djibouti to Morocco and even Angola in the South from where they’re getting important resources. Iran is very important for China as they’re a key element in the Chinese Silk Road as well as 40% of the Chinese oil imports come from there.

In this case, does the North–South Transport Corridor project go against the Chinese interests?

The Chinese strategy is completely opposite to the Russian one. They want to achieve their goals using little steps toward the ultimate goal, and for now it’s successful. I think, however, that the main geopolitical players, mainly the United States and to some degree Russia, have figured their strategy out. For now, China doesn’t want to go in direct confrontation with the United States because, most probably, they don’t feel prepared enough to do it. They want to put the hegemon in a situation where it’s going to be too late to stop them. In other words, in a hidden way to gain power and achieve their goals. And they already have results doing this.

Let’s change the subject a little bit. Did Russia betray the Kurds in Afrin?

No. The way the question is asked is incorrect. The operation in Afrin is excellent for the Russian interest as the Kurds are playing as the proxy army of the United States and its interests. The creation of a big Kurdish state means creating a big client state of the US and would put, in chess terms, 5 players in check – Iran, Iraq, Syria, Russia and Turkey. If you allow me to make that analogy, the Kurds are playing the role in the Middle East which the Albanians play on the Balkans – with only one subject to control 5 other players.

The Kurds trusted their US mentors too much and burnt their hand. The first time it happened in Kirkuk where the Iranians clearly showed who is in charge there. The same is happening right now in Afrin where the Russians are pushing their interest using the Turkish army. That way they are accomplishing a bunch of goals:

First, Turkey is doing the dirty work of Russia by removing the US military and geopolitical interest from the region.

Second, groups who are disloyal to the Syrian government are put in check and these territories will be to some extent given back under the control of Assad.

Third, while everyone is looking at Afrin, without notice, the Syrian army is destroying, take notice, the pro-Turkish groups in Idlib which is actually the much bigger problem. You have there about 30 000 jihadists who were concentrated there from all part of Syria and are now being destroyed by General al-Hassan and the Tiger Forces.

So for now, this is a successful game of chess for Russia and the talks on the media are only for public use. Some sources say that the operation in Afrin was coordinated in Moscow by the head of the Turkish forces at least a month prior to the start of the operation. In addition, the whole operation was first prepared by the heads of Russia, Turkey and Iran in Sochi.

Will the US try to interfere in the process?

Could this happen in the following months?

It has already happened on the battlefield. Turkish and US forces have already clashed in Syria. The question is will this happen on a regular basis or it’s just going to be sporadic fighting.

Does that bust the myth that NATO is a unified body?

It’s early to conclude this, but it’s clear that tensions are heating up. The Turkish political and military ship is slowly but gradually sailing away from the Western block. Turkey is starting to play the game of its own geopolitical interests which doesn’t always match the ones of the West. Russia is using this and is trying to make the gap larger and it seems to me that, for now, that they’re succeeding.

Last question very quickly: What is the role of the unexpected candidacy for President of Grudinin by the CPRF? What goals are set?

The idea is to dynamize the otherwise predetermined presidential elections in Russia and an attempt to get more political ground, but nothing more. The model of guided sovereign democracy, as invented by Surkov, doesn’t allow any mistakes to be made in the system.

This is trouble for Rajo (the city north of the pink area). It is center of road net for the NW area, expect the Kurds to put up a fight here. Losing it will mean faster agreement with SAA.

Bulbul already fell, Rajo and Jandaris is slowly getting surrounded, so is Shaykh-al Hadid. If those 3 districts fall, march to Afrin will be just a matter of time.

Seeing the success of TAF and Its FSA proxies, I think PKK will, again, make an aggreement with Assad regime for protection.

I am curious to see If Assad will go for such an aggreement. Seeing the revealed budget, a 550 million$ for PKK is obiviously for the partition of Syria. PKK is in posession of Tabqa Dam(which is the dam that provides 50% of Syria’s electricity) and oil fields east of Deir-ez-zor city. Which means if Assad tries to become friends with PKK, he won’t be able to rebuild the Syria unless he completely accepts the partition of Syria. Will Assad think and plan for the short-game plan and reach an aggreement with PKK? Or will he go for a more strategic and long-term plan and mark PKK as his and country’s enemy to prevent the partition of Syria?

I partially agree but i still think that Assad considers Turkey and its proxies as the “today’s enemies”. He knows the Kurds/US want a Kurdistan with half of Syria and an access to the sea. However, but he also knows that Erdogan wants all Syria and no Kurdistan. So i still believe, at least for a while, that he will try to play on Kurds side as a deterrent to Erdogan’s ambitions.

You can call me Al
Reply to  Skagos

Interesting comment and nicely said, finally someone is noticing the water issue.

That said, I don’t think the Syrians can may a plunge into any sort of deal with the Kurds due to the fact that they are US backed and therefore untrustworthy – I also think that there maybe a little bit more to the Syrian / Turkish relationship than is being told. Therefore, whilst I would not trust the Turks nor the Kurds now (US backed and stitched the Syrians up), in he short term I think that Assad should just see how it all plays out for now.

Now back to the dam; allegedly and as seen in Iraq, they are the easiest place to take + the demine, unless Uncle Sam decides to take it out leading to the death or thousands.

Jaime
Reply to  You can call me Al

Ronald
Reply to  You can call me Al

At Tillerson’s meeting with Erdogan , he came up with his kiss and make up idea of a “Joint Turkish-US Security Zone” all along the border from Afrin to the Iraq border .
We will see if Edogan falls for the American bait .

I just don’t see Turkey accepting all this nonsense. I find these recent news reptitive and fake. Turkey has set their eyes on Afrin. You better get out of the way unless you want to be hit

The leading guys of the faschist turkisk regime will only get, what Hitler, Musolini and folks like that ever got.
Sooner or later, it doen´t matter. In the end they all will be just another bunch of stupid dead faschists…
Tiocfaidh ár lá!

This is the female communist captured by indigenous fighters. No more need for censorship. 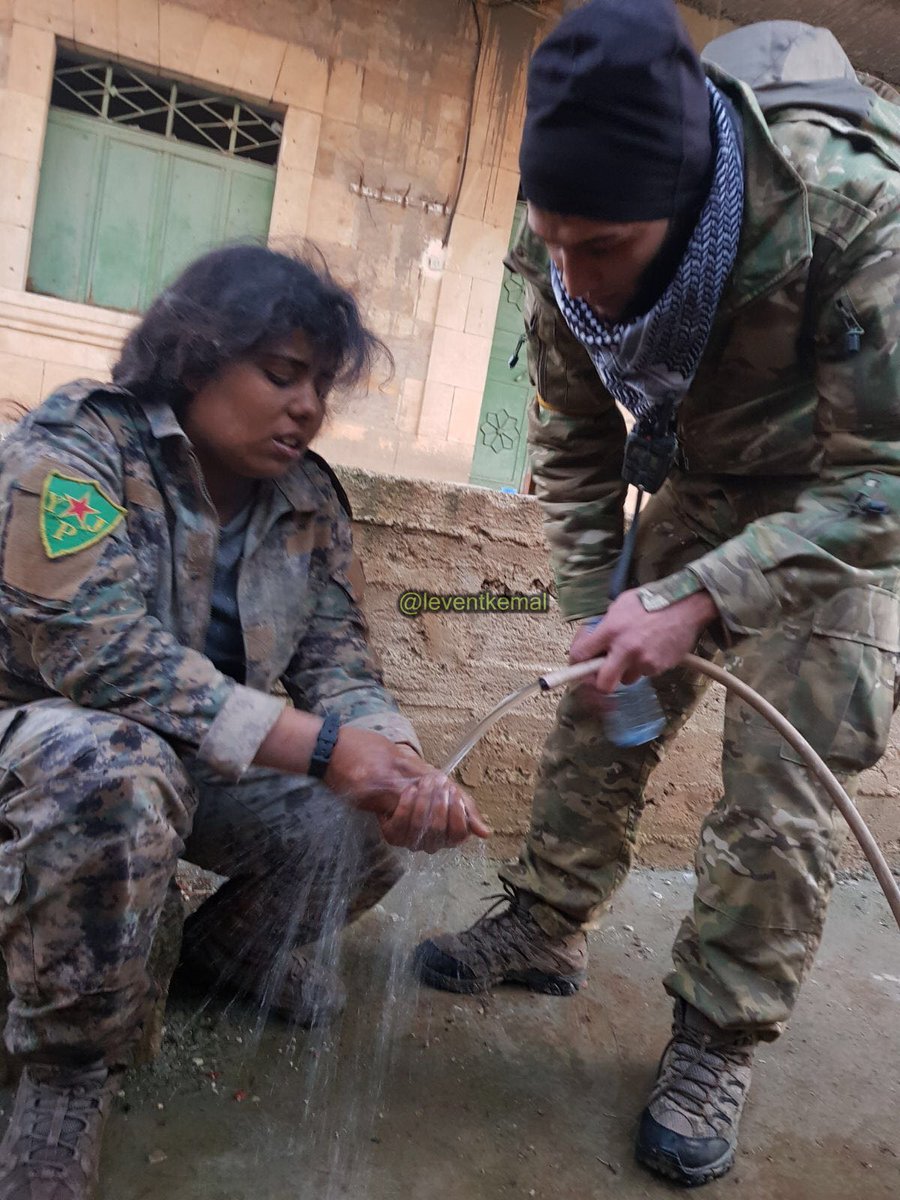 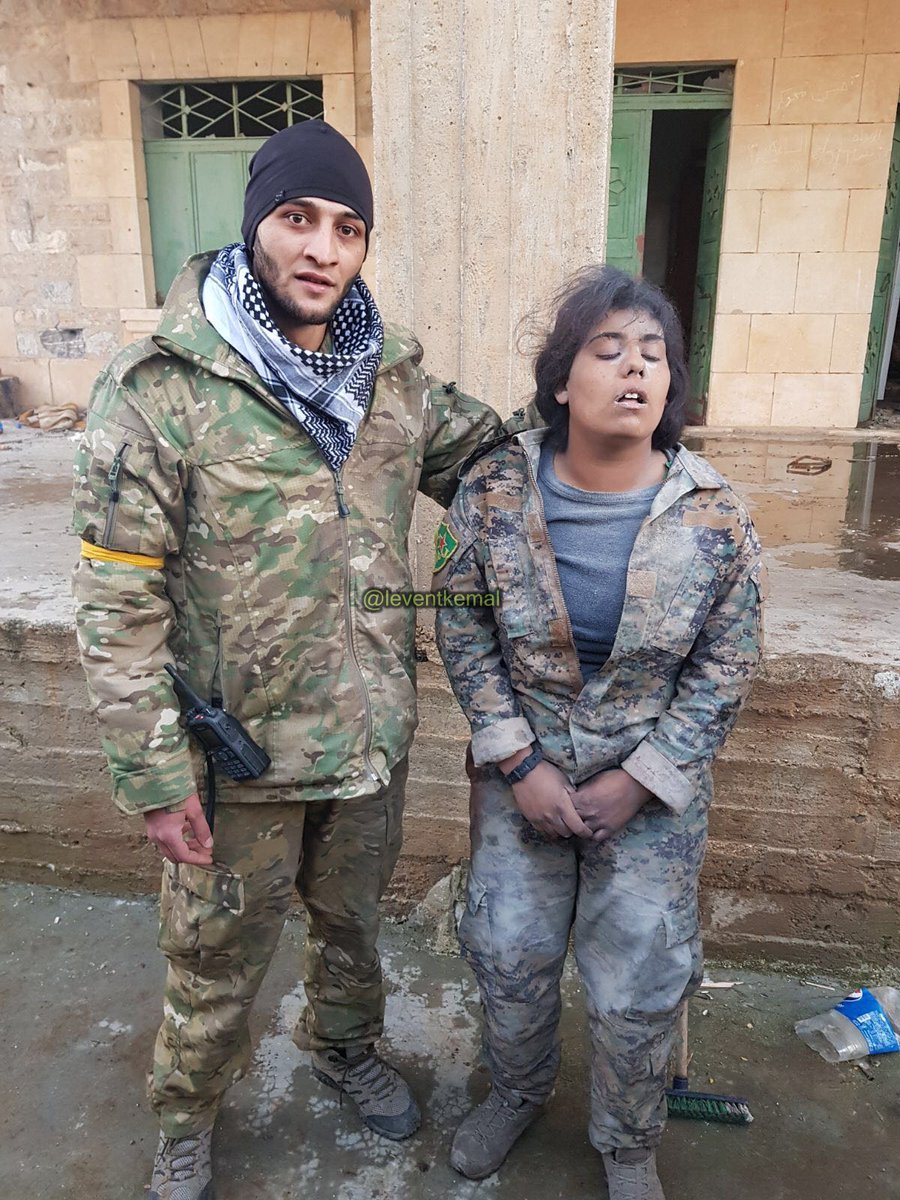