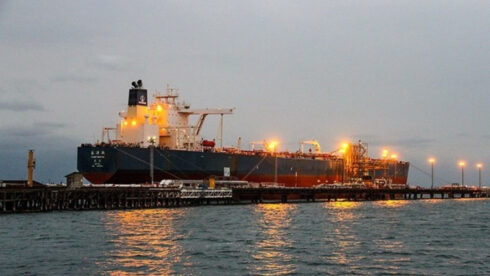 The US has slapped new sanctions on Chinese firms related to Iran’s petrochemical and petroleum trade, after years of reports of Chinese tankers engaged in sanctions-busting activity, and at a moment that a finalized restored JCPOA nuclear deal has all but collapsed.

The former has been identified as overseeing a commercial crude oil storage facility for Iranian products, and the latter operated a vessel which was caught ‘illegally’ transporting Iranian oil and fuel products.

These companies were said to be involved in the “sale of hundreds of millions of dollars’ worth of Iranian petrochemicals and petroleum products to end users in South and East Asia.”

And further according to the US Treasury readout, the actions target “Iranian brokers and several front companies in the UAE, Hong Kong, and India that have facilitated financial transfers and shipping of Iranian petroleum and petrochemical products.”

While Iran has been subjected to crippling oil-export sanctions for the last several years, it hasn’t stopped China, whose imports of Iranian oil have only increased by the month.

Much of the buying comes from independent Chinese refiners (otherwise known as “teapots”), who, traders said have embraced Iran’s cheaper crude as Brent prices soared globally amid the ongoing war in Ukraine and energy sanctions against Russia.

The official position of China’s foreign ministry has long been that normal business dealings between China and Iran should be respected. “China urges the US to lift the illegitimate unilateral sanctions as soon as possible,” the ministry has long repeated in various statements.

At some point China is going to have to shit or get off the pot when dealing with the West.

They won’t! The chinku secretly worships the West. Haven’t you observed this in person? Oriental/ Hendu-Pak/ turkish guppu type people because of perceived msm/ Hollywood propagated racial inferiority complex is totally subservient to the white man. These colored cunts just aim to please.

China needs to rain nukes on the west coast while Russia hits the east coast. The Jewish USA must die.

That would kill everybody, shit-for-brains. Using nukes is only acceptable if your territory is invaded and you are much weaker than the other country (who would have lost their mind….the US would never invade a nuclear power, that’s what keeps fatty Kimmy in power in NK, and why the US hasn’t been insane enough to invade Iran after all the tough talk since decades). I’m on Russia’s side as in NATO aggression that’s been going on since the 90’s, where countries thousands of miles from the Atlantic are given membership to conduct illicit biological/chemical weapons research on Russia’s borders in Georgia and Ukraine for example is enough for me to side with the right side of history here. I’ve had their lab created disease twice and now in September “a regular cold” that just won’t end, that I caught from my girlfriend who works in public…I thought it was over last week but nope, just started again, I feel like I’m 80 and I’m half that. The US did that and I’m not American, but my country is literally bordering it, Trump attacked the whole world to try and remain in power with that bioweapon and it’s insulting that untold numbers suffer and die from this shit. I mean at least if I spat green shit I knew I’d need antibiotics…but nope, it’s not bacterial. I’ve been living a clean, monogamous life since the last 13 years, so this came from my girlfriend who got it working her job as a kindergarten teacher, kid microbes can be bad, but I never heard of a “regular cold” lasting a month before.

All this to say, they’re attacking us too now, let us get rid of those idiots, their time will come.

US used nukes on Japan and now the Japanese suck them off all day.

Japan is doing great. Yeah they adore the West, but Japan is a great place. They got their priorities right and know who their enemies are. Pay the US $8 billion per year in chump change for security guard duty. Works out for them no? 3rd biggest and advanced economy in the world no? Who you kidding?

China is enjoying with Iran and Russia oil.No problem.

You fool, the US will nuke China in no time! Off the hip worthless comment from you? Are you serious?

So we can see , yet again, the US state departments’ low IQ cretins in action.

This is while the cowering US vassals will shortly implode into a pile of frozen excrement and their soon to be worthless currencies.

The US is hated by the majority of the planet and US mafia protection rackets are now targetting their feckless servants in order to survive.
Whenever servants have been sacrificed, history has recorded the deaths of corrupt and amoral empires.

Washington stealing Iranian, Iraqi and Syrian oil and China buying from Iran. This is the difference.

Washington is scamming the world communities. Stealing oil and gas from Syria, Iraq, and Iran while China pays cash to buy Iranian oil. Thugs are always thugs by nature.

I don’t understand why Russia and China can’t own their own ships, self insure, and keep their business out of USD.

USA sucks all 1.3 billion Chinese dicks !! Who died and left the them to be the God of earth !! If they impose sanctions on a nation its their choice and have no right to force other nations to do the same !! USA needs to get os the high horse and see that the world is not theirs to rule over it, they gave it their best try and failed///now fck off !!

China needs to tell the USA’s state dept to go fuck itself and ignore these illegitimate sanctions. Who the fuck cares what USA thinks about trade between two other countries? If Iran and China want to trade oil, gas or whatever it is entirely their business and has nothing to do with fucking USA. This is why the whole world is sick of USA: it sees itself as the entire world’s arbiter as to who can do business with whom. Outrageous arrogance.

It is funny to see how other yanquis’ pigs now really questioning why they are “allies” with these greedy pigs. The EU is going down after the US cut off the EU lifeline/s (Nord Stream 1 and 2).

US and UK have been killing 6 million of innocent peoples in the Middle East.

China is enjoying with Iran and Russia oil,no broblem.