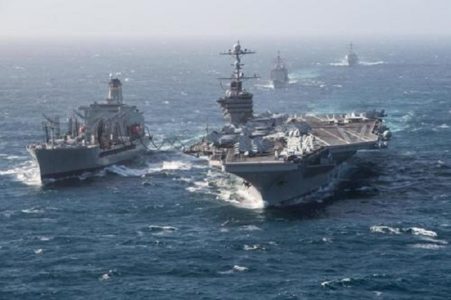 The US is the most vocal about supposed “threats” coming from others despite being the only country in history that has used all three types of weapons of mass destruction in war.

The world has been living in fear of thermonuclear confrontation for nearly eight decades. Nuclear-armed countries have a tremendous responsibility in this regard, as their actions can cause the destruction of the world as we know it, with cataclysmic consequences for humanity. In early August, UN Secretary-General Antonio Guterres stated that the world was “one miscalculation away from nuclear annihilation.” Guterres added that “we have been extraordinarily lucky so far” and called for a broader stand-down of all nuclear-armed powers’ arsenals, but also stressed that the “luck” the world had enjoyed so far in avoiding a nuclear catastrophe “may not last” and urged the world to “renew a push towards eliminating all such weapons.”

Although the UN Secretary-General is correct in his warnings, it should be noted that very specific global powers are escalating tensions to the boiling point. Ironically, the side which is the most vocal about supposed “threats” coming from others is also the only side in history that has used all three types (nuclear, biological, chemical) of weapons of mass destruction (WMDs) in war. Anyone familiar with the history of WMDs knows this side is the United States of America. The imperialist thalassocracy used nuclear weapons against civilians in Japan, as well as a plethora of biological and chemical weapons in dozens of other countries it attacked since the end of the Second World War.

And yet, the US still has the audacity to accuse others of the supposed intention to acquire or use WMDs. In recent months, US President Joe Biden has been accusing Russia of alleged plans to use tactical nuclear weapons in Ukraine. Although the US provided zero evidence to support such statements, Western corporate and state-run mainstream media continue parroting this narrative, further trying to cement Russophobia in the minds of regular people. According to these reports, the US has allegedly “sent several warnings to Russia via backchannels regarding the possible use of nuclear weapons in Ukraine.” A Washington Post report claims that “the White House’s messages to Russia have been intentionally vague to foster uncertainty in Moscow about what the US would do if Russia deployed its ultimate weapon.”

According to State Department officials who gave the interview to the Washington Post, the US has allegedly “warned Russia multiple times” since Moscow started its special military operation. The White House claims that its warnings to Russia (provided the claims are even true) have been “intentionally vague” in order to “cause uncertainty” in Moscow. US officials insist that “these nonspecific threats will deter Russia through strategic ambiguity.” The report further states that “the ‘strategic ambiguity’ is an intentionally non-transparent foreign policy concept designed to cause the enemy not to act out of fear it could cross a red line without knowing it.”

The officials claim an example of this approach is the US policy toward Taiwan. For approximately half a century, Washington DC has been implementing “strategic ambiguity” in regards to the island’s political status. The US “is refusing to officially and legally commit to directly aid Taiwan” in case China decides to take it back. In doing so, Washington DC has “discouraged Taiwan from officially declaring independence.” However, the US also doesn’t deny it would “directly aid the government in Taipei.” This “accomplishes the goal of deterring Beijing” from taking direct action to fully restore its sovereignty over the breakaway province.

However, this foreign policy concept toward Russia and China seems to be changing. Although it’s extremely risky in and of itself, this approach is still less escalatory than what the US has been doing in recent months. The troubled Biden administration has already started abandoning the “strategic ambiguity” concept. Since he took office, Joe Biden stated the US would go to war with China over Taiwan. He publicly stated this at least four times. For its part, Beijing has responded to these threats by conducting naval exercises and it’s already in the process of expanding its strategic arsenal. According to various reports, in response to US aggression, China is investing in a threefold increase in the number of strategic weapons it operates by 2030.

Moscow is also taking note of US threats. Last Monday, Russian President Vladimir Putin warned that the Russian military will use everything at its disposal to defend the country and its territorial integrity. President Putin’s exact statement was: “If the territorial integrity of our country is threatened, we will, without doubt, use all available means to protect Russia and our people – this is not a bluff.” Although the warning didn’t specifically mention nuclear weapons, it’s clear that Russia could deploy them if the US tries to escalate. Western state and corporate-run mainstream media immediately took the statement out of context and started constructing the convenient false narrative that Russia would use WMDs in Ukraine.

Although Russia does operate the world’s most powerful nuclear arsenal, it has never used these weapons in war (unlike the US). The country’s WMDs serve as a deterrent and this was exactly what President Putin meant in his statement. Although the Kiev regime is a direct security challenge for Moscow, Russia’s conventional forces are more than capable of tackling this issue. Moscow has also announced low-level mobilization, which clearly implies that it doesn’t plan on using WMDs, as it makes no sense to send hundreds of thousands of soldiers into an area that will allegedly be targeted with nuclear weapons, as the US claims.

Only facts
Reply to  vietnam

vietnam
Reply to  Only facts

coming out of your ass?
russia, china, north korea are committed to the complete destruction of yanquis. that is the hard reality.

My name is Drago Bosnic. I keep dreaming about a nuclear dick. That is why I wrote this long poetic BS vomit that will nobody read.

I love nuclear dick. It makes my sissy pussy wet. I want it shoved up my ass.

Americans should watch their governments old nuke advice of the 50,s/60,s – remember “Duck & Dive ” I am sure that would save a lot of US lives ( sarcasm ) or “pull the curtains and hide under the stairs “– “dog ,on it ” that sure is a “life saver ” .

Having seen a shadow on a wall that used to be a human being but a nuke completely disintegrated every body molecule I dont think the USA is prepared to tell its citizens the truth — did you hear that Liz Truss in the UK ??

Donbas is 100% liberated
Reply to  Donnchadh

Have we won yet?

as long as the US dont get their own “shadows”, as long as these “american exceptionlists” dont have to carve rotten food out of burned tin cans, like the germans had to, and bury their loved ones, unidentifyable” in mass graves – there will be no global “equality”.

the US-power-elite is so deep in their own, convinient shit ideology, they cant even imagine that their fantasy gonna end in a blink of an eye.

ask the 500.000 dead iraqi children and teenager ’cause of their “sanction”.

“it was worth it” – madelaine albrigt, foreign minister

will be all you get – decades later, if your lucky.

there is no real “oppostion” in the US.
all the major parties and groups, collected in “republicans” and “democrats” labels, are US-imperialists and “american exceptionalist”. they US people had more than a few decades to vote otherwise but they, in general, only laughed at alternative, independed candidates…

its just like in the “weimar republic” – the majority of them voted for the hellhole they gonna live in and just like the nazis they gonna need a hard correction.

after 20 years of my own witness of US foreign policy, and decades of archived “US-policies”, im sure there is no other way for world peace than get rid of this shithole roque state…

Only Russia threatens with nukes.

Says the country at war 90% of the time that invaded countless countries and armed/funded even more wars just so the MIC could get richer. Remember Russians helped Lincoln for free, but Americans are only motivated by greed. Bad legacy.

as usual the USA are full of lies this ROGUE TERRORIST NATION USA need to be BROKEN UP AND DISBANDED for the worlds sake. =Z=

Secession is the only way it’ll happen, but US civil war 2 maybe the result.

to get rid of the nuclear threat we first have to get rid of the US-imperialists and their “american exceptionlists” neo-master-race ideology – and the only way to achieve this is, and im sorry, to nuke this shithole roque state into oblivion. because not only wont the US-power-elites give in in favor of a multi-polar world but they would also nuke russia, china AND EUROPE into oblivion…

they literally hold all of us… ALL OF US not matter the worldview ransom for their sorry, primitive infantile dream of glory and “empire”… even the german nazis were more based than these neoliberal, neoconservative shitheads.

Ironically, the US looks gim on its thermonuclear arsenal so far due to tritium storage running out so quick. Indeed, that is the main reason Russia does no bother talk about START 3. That explains why Russia alone could execute a war, in fact, against the whole West for now. The US is in its delusion of a nuclear superpower at least for decades ahead.

Yankee doodle doo got stuck in Afghanistan for 20 years smoking opium and raping locals but they think they can win a nuclear war? The American problem is a mental problem

The Russians should 100% lure UAF forces out into open territory, trap them there and then drop sub 1kt nukes and vaporize them in a place where there are no civilian casualties.

It’s hilarious how Russian propaganda is desperately trying to spin the narrative and portray itself as a victim just defending itself and the US as the threatening aggressor, even though Russia started this way by attacking and occupying a sovereign country, while threatening with nuclear weapons. Russia is the biggest danger to Europe and the world!

Yankee doodle do ain’t gonna do shit, they ain’t risking there economic and military power for some tiny island in the scs and the ukraine.

The part of the earth Russia is living on will be cut off like a slice of an apple if Russia even think of using nukes against innocent Americans.
And the earth will continue to circulate around the sun without the slice and will heal itself forward, and thats the truth!