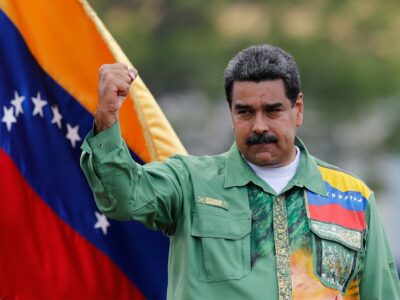 If its financial warfare fails, Washington hawks could employ Colombian proxies to attack Caracas once again.

Nicolas Maduro’s Bolivarian government of Venezuela announced it will hold an anti-NATO “counter-summit” in San Cristóbal (state of Tachira) on the border with Colombia on June 28-29. Colombia, Washington’s main ally in South America, and also a huge human rights breacher, has been a Major Non-NATO Ally (MNNA) since May 2022. This development comes amid a very tense Latin-American context, after news that Nicaragua is joining Russia in military exercises.

Speaking about the summit, Venezuelan National Assembly member Julio Chávez highlighted the symbolic significance of this location. The state of Tachira is the place where a lot of Colombian-backed anti-Bolivarian activities have been taking place. For example, on February 23, 2019 violent armed groups tried to organize demonstrations in one of the bridges that connect the Venezuelan state of Tachira and the Colombian state of Santander. Venezuelan authorities in Caracas have accused the Colombian authorities in Bogota of turning a blind eye to mercenary and paramilitary activity in the region aimed against its government.

The two nations share a 2,200 kilometers border and there have been increasing tensions there. On June 3, Maduro stated that the “only thing” that enters Venezuela from the Colombian side is “terrorism, violence, drug trafficking, kidnapping, smuggling, and crime”. Caracas has also complained about Colombian illegal migration, human trafficking and COVID-19 supposedly coming across the border. On August 2021, violence escalated on the border with two Venezuelan soldiers killed in an alledged terrorist attack and other incidents.

Maduro has called Colombia as a “narco-state”, and it has been described as such by a number of experts too. It is home to an infamous mercenary industry, which often has links to drug cartels and far-right paramilitary activity. Colombian mercenaries were behind the US-backed murder of Haitian president Jovenel Moïse last year, for example.

In May 2020, American mercenaries attempted to enter Venezuela on speed boats from Colombia as part of so-called Operation Gideon to launch a coup d’etat. Caracas accuses Washington and Bogota of having played a role in it. It is a well known fact that the US at least considered supporting an invasion of the country a number of times.

Moreover, the 2020 oil discoveries in Suriname and Guyana also add further tensions in the continent, as there have been territorial disputes between the latter and Venezuela.

Recently, amid a global oil and energy crisis in the aftermath of the Russian-Ukrainian war, there were talks about Washington and Caracas “resetting” their relations. On 7 March 2022, a high-level American delegation visited Venezuela to discuss oil supplies, and this was seen as an indication that tensions between the two countries were being partly relaxed. The country is in fact located  on the world’s largest proven oil reserves. Before sanctions in 2019, it sent about 580,000 barrels of heavy oil per day to American refineries. The US made up for that by turning to other suppliers, including Russia, ironically.

American journalist Mac Margolis, writing for the Washington Post, on March 9, argued that Venezuela and the United States should move beyond sanctions, ultimatums and “toxic” polarization. Last week, Washington “authorized” Spanish oil company Repsol and Italy’s Eni to start shipping Venezuelan oil to Europe in July, so as to help Europe ease its dependence on Russian oil. Maduro also confirmed that the US granted licenses, and Chevron, Eni and Repsol will exploit their oil and gas deposits in the country. Chevon is to resume operations, but has not yet been authorized to export oil to the United States.

Despite these recent developments, the fact that Venezuela (as well as Cuba and Nicaragua) was not invited to the Summit of the Americas is an indication that relations today are far from a “reset”. And there is no indication American sanctions on Venezuela will be fully lifted, as Caracas demands. It is in this context that Iran and Venezuela (two sanctions-hit oil-producer countries) just signed a 20-year cooperation agreement, as announced on June 11. The deal includes cooperation on the financial and energy sectors, as well as defense projects. In fact, after not being invited to the Summit, Maduro went on an Eurasian tour, and visited Algeria and Turkey, before arriving in Iran. Turkish President Recep Tayyip Erdogan has stated that “all aspects” of Turkish-Venezuelan relations are to be reviewed and that “steps will be taken” to further enhance their relations.

The United States remains arguably the sole sanctions superpower in the world, according to professors of international affairs Henry J. Farrel and Abraham L. Newman. Washington’s sanctions policy, although still a burden for its targets, is becoming increasingly less effective and in fact even backfires in terms of stimulating new partnerships – and even initiatives aiming at de-dollarization. It also reflects very poorly on the US ability to accept the emerging polycentric and multipolar new global dynamics.

If the United States refuses to resort to pragmatism and good diplomacy with Venezuela and if its financial and economic warfare against it fails, Washington hawks could feel tempted to employ its Colombian proxies to attack Caracas militarily in yet another coup or invasion attempt. This would bring catastrophic consequences for the continent and even for world peace, considering the potential alignments and escalations that could ensue.

Nato ( digital transformers gay gang mafia ) !!! its gonna cry, everybody knows that guido ( guida?? ) its a digital monkey from Davos !!! So the prostipute queen of the gay nazis still as the robed gold from venezuela !! Because everybody knows that the parazites are monkeys !!!

So the Prostipute queen of the jubileus of nazis are waiting to kill assange !? REAL PROSTIPUTE PARAZITE !!!!

“there were talks about Washington and Caracas “resetting” their relations” that’s always the biggest mistake ever: Gadhafi, Sadam, Milosevic, even Lukashenko all tried to reset/normalize their relations with the US Empire, only to be backstabbed by the Empire soon afterwards.

Work AT Home
Reply to  Theo

I surrender my job Associate in Nursingd now. I create $120 an hour in operation from home doing those simple chores on line. I make $30,000 a month operating on line 3 hours a day. I counseled you to strive. (.mn13) you will not lose anything, merely try it on the next web site and earn every day…
For further details….. 𝐜𝐚𝐬𝐡𝐬𝐢𝐭𝐞.𝐭𝐤/

Last edited 5 months ago by Work AT Home
-2
Reply

NATO is weak by its nature. Unifying Germans, French and English? How crazy is that? And the funnier part is, Venezuela has more oil than all the rest combined except for Canada and the US.

France or England are militarily more powerful as weak Russia. Even Chinese are laughing at Russia after seeing its debacle in Ukraine 😆😆😆

Please give me your definition of ‘debacle’ as Russia is steadily advancing, decimated the US backed Ukranian troops and has surrounded most of what is left.
Ukraine now is resorting to conscripting/drafting all women between 18 and 60, whether they have small children or not. Definitely the actions of the winning party right?

The shysters in washingtub are painting themselves into a corner.
Colombia has always been america’s bitch. Once Colombians take back their policy making and get with the South America program of ending the fear of US threats to their countries, things will improved many times over.

Why would Venezuela agree to have Chevron, Eni and Repsol continue their operations, confirming that the US controls Venezuela by issuing a license? Apparently, the Venezuelans do not control their own sovereignty or who can operate on their territory.

Tell the attendees to bring their own food and bodyguards.