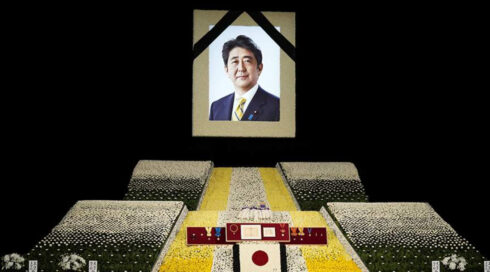 Be careful who you praise and the degree of zeal you do it with.  The slain Shinzo Abe, shot dead in Nara on July 8, towered over Japanese politics.  In doing so, he cast a lengthy shadow.  In death, this shadow continues to grow ever more darkly.

The reaction from certain figures outside Japan left an impression of distorted admiration.  There was Hillary Clinton’s cloying tribute about Abe being “a champion of democracy and a firm believer that no economy, society, or country can achieve its full potential if women are left behind.”

The tribute was a classic reminder of how the late Japanese leader could mislead, in this case on the rights of women and the policy of “Womenomics”.  In her effusion, the US Secretary of State had ignored Abe’s problematic position on Japan’s use of “comfort women” or sex slaves during the Second World War.  Before the Japanese National Assembly, Abe claimed, despite having previously made some tokenistic apology, that, “There was no document found that the comfort women were forcibly taken away.”

Academic Alison Dudden provides a succinct distillation of that side of Abe.  His “great leader” credentials might be celebrated in some circles, “but his personal vision for rewriting Japanese history, of a glorious past, created a real problem in East Asia”.  It was a vision that proved divisive for countries in terms of how they approached Japan, and it also divided Japanese society in terms of its own wartime responsibility.

Of all those attending the state funeral, the Australians seem the oddest, resembling an Olympic delegation filled with previous and current medal holders.  There are no less than four leaders, three former and one current, who have decided to put in an appearance: the Coalition figures John Howard, Tony Abbott and Malcolm Turnbull, and Labor prime minister Anthony Albanese.  “Mr Abe was a remarkable leader, a catalyst for change in Japan and the region, a true friend of Australia,” remarked Albanese in a statement.

To understand the darker side of Abe requires placing such gushy remarks to one side.  Granting him a state funeral was itself a contentious point, given its historical associations with imperial power.  For prime ministers in the postwar era, there has only been one other: Shigeru Yoshida in 1967.

Several opposition politicians are also irate about the way the decision to hold a state funeral was reached.  Parliament was not consulted, with Prime Minister Fumio Kishida keeping it a Cabinet matter.  As Junichi Miyama of Chuo University put it, “A state funeral contradicts the spirit of democracy.”

A number of citizens even went so far as to argue against its legality, petitioning the Tokyo District Court to block the event.  The claimants in that case also argued that the measure would propagate a situation obligating the public to mourn Abe’s death.  The petition, comprising 576 individuals, was dismissed by Presiding Judge Yukito Okada, who declared that there was no law that could halt state budget implementation via petition.  The justice also dismissed the second claim on obligatory mourning.

In July, the national broadcaster, NHK, found that 38 percent of respondents were against the proposal.  By August, the number had grown to 57 percent, and not helped by the swelling bill, estimated to be 1.7 billion yen, a distinctly larger sum than the initial 250 million yen figure.

Kishida justified the decision on the basis of political longevity: Abe had proven to be Japan’s longest serving leader.  The funeral was also an occasion to show how “Japan will not give in to violence”.  Given that Abe had already received a more private funeral where his family, friends and admirers could pay tribute, the entire occasion reeks of self-interest; the dead, after all, can offer no protest at being used.

The decision has stirred a rash of demonstrations, even encouraging an attempt at self-immolation.  A number of themes feature in these reactions: the note of militarism Abe struck while in office; his historical stubbornness on the role of Japan during the Second World War, and, perhaps most notably, links to the Family Federation for World Peace and Unification (the Unification Church).

The nexus between the ruling Liberal Democratic Party and the Unification Church, a South Korean outfit founded by Reverend Moon Sun-myung and colloquially known as the Moonies, was evident in plain sight.  Abe’s personal links stretch back to his grandmother and former leader Nobusuke Kishi, who aided the sect’s establishment in Japan.

When Moon paid a visit to Japan in the spring of 1992, he was initially denied entry by senior intelligence officials on account of having served time in a US prison for tax evasion.  It did not take long for the decision to be overturned, with Shin Kanemaru of the LDP intervening on the reverend’s behalf.

The special treatment offered this excommunicated Presbyterian minister was emblematic of the broader approach to religious groups in Japan.  The country’s postwar constitution guarantees freedom of religion but supposedly curbs political influence and state support.  Nor is the state permitted to engage in religious activity. The result is a stealthy connection between religious groups and political parties that has proven difficult for authorities to investigate.

Former senior official at the Public Security Intelligence Agency Mitsuhiro Suganuma attributes this to constitutional restraints. “Nobody was willing to investigate the Unification Church and the close ties with Japanese politicians because the constitution guarantees freedom of religion.”

The association between the LDP and the Unification Church also yielded another dividend: guaranteed support against communism.  This was not to say that Moon did not court his own idiosyncratic attitudes towards his Japanese admirers.  “The Japanese way,” he reasoned in a speech given in 1997, “is not heaven’s way.  When you go to the spirit world, you should speak Korean.”

The conduct of Tetsuya Yamagami initially commanded shock and grief but his reasons for the killing started to take hold.  These included the impoverishment of his family at the hands of the Moonies.  His mother, the claim went, had made crushingly large and ruinous donations to the sect, stripping the family fortune.  While few would endorse such retributive conduct, historical attempts to understand Abe will have to do better than any seen by the visiting dignitaries, equipped with their share of whitewash.

Cause if they can do THIS https://311truth.wordpress.com/2014/01/18/magna-bsp-the-israeli-connection-to-311-terrorism-at-fukushima/ for attempting to depeg themselves from the Great $atan’s $USD and helping another government authorized to enrich uranium for their commercial nuclear reactors they are capable of whacking a Leader that gets out of line!…

So far the intimidation https://www.zerohedge.com/geopolitical/sullivan-warns-russia-catastrophic-consequences-1st-public-response-putins-nuclear is working fine in the EU to commit $uicide if they refuse to comply with the $atan’s demands!

Also, I’m not going to jump in Japan BS too much, it is useless.

The only people who should have been paid for Queen Elizabeth’s funeral was the guy who shouted “DIRTY PAEDOPHILE!” At prince Andrew and that one guard who redpilled more people about the clot shot by fainting live during the ceremony.

Dead politicians are the best politicians. Humanity needs to come up with something better to govern itself other than whores in suits.

So basically he offered a different perspective from the mainstream propaganda narrative on WW2 that was spun by the allies to make themselves look better.
And he was tangentially involved with the moonies.

If this is the worst they have on him then he wasn’t such a bad guy.

I take it Slava you are a young guy who does not know Japan,s evil history ?

Read “The Knights of the Bushido ” then Japanese atrocities in China including the bio-lab set up to experiment on Chinese/Russian citizens nor things like a Chinese female teenager getting a bottle forced up her as a “laugh ” by two Japanese soldiers or filling prisoners full of water then jumping on their stomachs or gang rapes continually .

I cannot post the really bad stuff as it would be blocked but I have the REAL history not some “Killery ” Fantasy .

I wasn’t there to investigate “Japan’s evil history”, nor were you. You just trust what a bunch of Jew journalists are telling you. Jew journalists whom lied about EVERYTHING else.

I have no doubt that the Japanese committed war crimes, as did everyone else. But the Japanese war crimes were nothing compared to the firebombing of Dresden and the nuking of Hiroshima and Nagasaki, the worst war crimes ever committed in human history.

Luckily the propaganda narratives surrounding the Holohoax and Nang King provided a nice cover story so we wouldn’t have to confront our own actions during that war.

And your a Western historical revisionist exactly what George Soros has brainwashed Americans to believe in Woke — quote- “the Truth is a Lie and a Lie is the Truth ” –sorry reality IS reality not some NSA dreamworld propaganda.

Holohoax fables are the woke bullshit that George Soros and the rest of the Jews are pushing, not historical revisionism.

Truth fears no investigation. There is a reason why they have tried to stop any legitimate investigation of WW2 and why it is criminalized to deny the propaganda narrative.

No mass immigration of 3rd world people in Japan. Very low crime rate. All the Japanese should thanks Abe for this. Reminder : Japan is a US base since 1945. It means he has been badly pressurized to change immigration laws by the (((murican))) leaders but resisted. How : with the power of its “church”. Very clever.

I wouldn’t chalk all of that up to Abe. The Japanese have been a very closed off society for thousands of years. It is within their culture and nature.

It wasn’t the American churches who tried to break open Japan, it was the Jesuits in the 17th century. And they behaved very badly, so much so that they ruined Christian missionary efforts even for the Russian Orthodox for hundreds of years until St. Nicholas of Japan.

Abe’s killing might be a hoax. Judging from the video released he looks back BEFORE the first shot, then continues to stand there, then the second shot occurs as people rush up to him but there is no visible evidence of a serious wound despite the weapon being a home made shot gun. At that range if the shot was accurate enough to kill it would leave obvious wounds. Perhaps a masonic false flag to allow Abe to exit as a scapegoat for participation in the Convid genocide program.